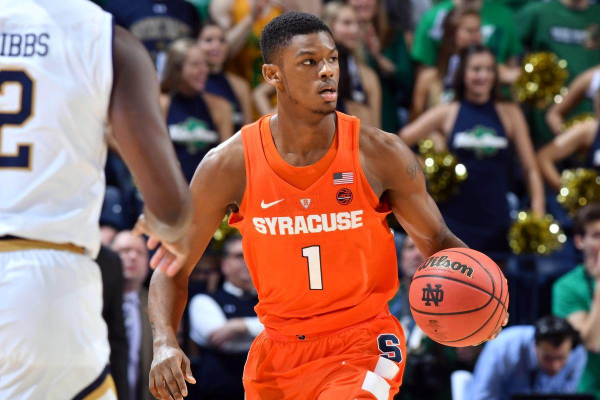 Tuesday night will feature a battle between a top-25 team in number 14 Buffalo Bulls (10-0, 1stMAC East) and recently removed top-25 team the Syracuse Orange (7-3, 1st ACC). Buffalo will travel in this one as the game will be played in the Carrier Dome.

For Buffalo, they have started the season undefeated and have had some impressive wins over West Virginia and Southern Illinois (twice). Their last victory was on Saturday when they beat Southern IL 73-65. For Syracuse, they have had a little more inconsistency, particularly playing out of their conference, than they would have hoped. They are 7-3, but their most recent game was a surprising 68-62 loss to Old Dominion. Still, they have shown flashes of potential as they beat Ohio State earlier in the season, but will have to play well to beat the hot-shooting Buffalo team. Tipoff for Tuesday’s contest is scheduled for 8:00 pm ET.

In this contest, the Syracuse Orange are 3.5-point favorites playing at home. The over/under for total points scored is set at 144.5.

This game will come down to a good offense versus a good defense. For Buffalo, they are currently averaging 86.6 points per game, which is good for 14th in the nation. To counter that attack, though, the Syracuse Orange rank 28th in team defense, as they are holding teams to just 62.2 points per game.

On the opposite sides of the ball, Syracuse ranks 245th in the nation in scoring at 71.9 points per game while Buffalo ranks 90th on defense, holding opposing teams to 67.7 points per game.

For Buffalo, they have four players who average double-digit scoring, but they are led by CJ Massinburg. On the season, Massinburg is averaging 17.1 points, 7.1 rebounds, 2.9 assists and 1.2 steals per game. He is shooting 48.6% from the field, including 42.9% from behind the three. They will need another big night from him if they want to roll with the big boys of a conference like the ACC.

Syracuse Hoping To Show A Better Performance Than Against Old Dominion

Saturday’s game against Old Dominion is one that the Orange are hoping they can put in their rear view mirror. It is the type of game, though, that shows they are susceptible to times of inconsistency. To try to right the ship, the Orange will turn to Tyus Battle to lead them. On the season, Battle is averaging 18.5 points, 3.2 rebounds and 1.9 assists per game. He is shooting 46.1% from the field, but just 34.2% from behind the three.

Other than Battle, the Orange only have two other players that average double-digit scoring. Oshae Brissett is averaging 14.9 points, 8.1 rebounds, 1.9 assists and 1.1 steals per game. Elijah Hughes is averaging 14.3 points, 4.4 rebounds, 1.7 assists, and 1.6 steals. The only other player averaging over 20 minutes per game is Frank Howard who averages just 4.8 points per game, but chips in with 1.2 rebounds and 4.2 assists (albeit in only 6 games this season).

Buffalo And The Points

It is always tough to pick when you are looking at mid-major teams like Buffalo taking on a historically solid team like Syracuse. Still, I have not been overly impressed with Syracuse, and their loss against Old Dominion highlights why. At this point in the season, there has just been a level of inconsistency to their play. If Buffalo can shoot well against the Orange defense, I like Buffalo to not only cover the spread but to win in this matchup. For my money, I am taking Buffalo and the 3.5 points.