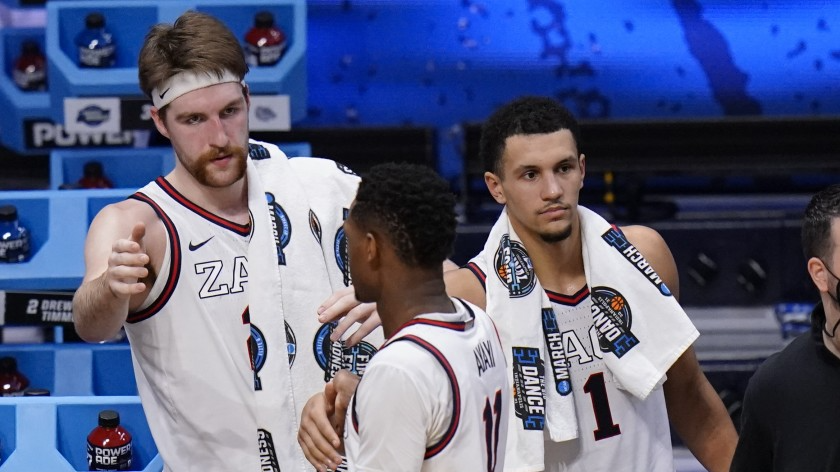 After a March Madness for the ages, we now have a Final Four that is excellent for storylines. For starters, we still have a great chance to see the two best teams face off in the title game on Monday, and the top team is still undefeated. That is the basic stuff. Beneath that, we have the battle to determine which is the best team in the state of Texas, just days after Texas hired Chris Beard to lead the program in the wake of Shaka Smart’s departure for Marquette.

Also, we have the program that has won more titles than any other as a massive underdog against a team that has never won one, and it is totally justified. That game might be a bloodbath as many other Gonzaga games have been.

Both of these teams advanced with relative ease in the Elite Eight. Baylor won and covered against Arkansas, taking control of the game early. What Baylor continues to show is that extra gear where they can just pull away from teams. Early on they were making it really difficult for Arkansas to get into their offense, and by the time the Razorbacks settled down it was too late. The Bears showed their depth getting 22 points from Macio Teague, generally the third guy in the scouting report. The only real downside from the win was that Mark Vital picked up five fouls in just 18 minutes of action. He is a big part of what they want to do on defense.

The Cougars advanced by beating Oregon State in a game where the spread result flipped with a meaningless three-pointer by the Beavers late. They are now 2-2 ATS in their four NCAA Tournament games but are underdogs for the first time. This is only the second time all season they have been underdogs. Back in November, they were +3 against Texas Tech, a game they won by 11, holding the Red Raiders to just 53 points. All season long the Cougars have been one of the best defensive teams in the country. They are really strong on the perimeter too, so they seem well suited to match up against the strength of the Bears.

These are two really good teams and the line seems more than fair. I think you have to lean to Baylor who has been beating better competition all season long. If you like the Cougars just take them on the money line, which is the better value.

Gonzaga had little trouble beating USC to advance to the Final Four. They won by 19 as the game was in control halfway through the first half. There was some theory that the size of USC would really bother the Bulldogs. There might have been a little of that, but the game turned because Gonzaga was so good at turning USC mistakes into points. That should come as no surprise, as they have been doing that all season long. Big man Drew Timme was again a very difficult cover, and guard Jalen Suggs cemented his status as one of the best players in the game and a future lottery pick. Look for Corey Kispert to be more of a factor in this. It might be his turn, and he is a better shooter than he has shown.

UCLA followed up their overtime win against Alabama with a two-point win over Michigan. It was one of those classic games where one player shone for the winning team with Johnny Juzang scoring 28 of the Bruins 51 points. Their defense was amazing, holding Michigan to just 49 points. That harkens back to the days that coach Mick Cronin was back at Cincinnati, but can they really do that to a team like Gonzaga? If so it will be the biggest upset in the history of the Final Four. UCLA has won four of their five Tournament games as underdogs, and it has been a great run but it likely ends Saturday, even if they keep it close.

It is hard to know what to make of this line given where we are in the season. It feels true and not overrating UCLA because of their recent success. If you liked Gonzaga against USC, there is no reason not to double-down on another easy win for the Bulldogs.