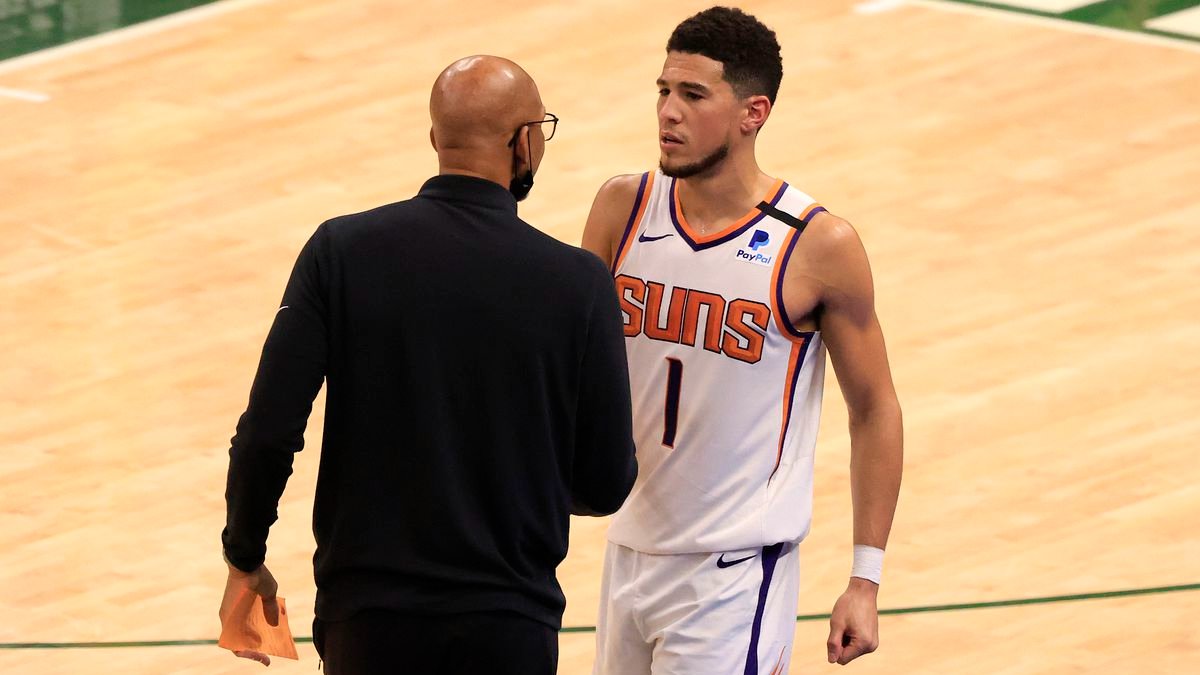 The NBA Finals is up for grabs as the series returns to Phoenix tonight for Game 5. And based on the pattern the first four games have followed, the series could be set to go the distance.

Milwaukee did their part in taking both games at home behind some great performances from their stars. In the first two games of the series in Phoenix, only Giannis showed up. If that happens again the Bucks will head back to Milwaukee staring down the end of their season.

The Suns were in control of Game 4 for most of the game before the Bucks rallied late. That is a good sign after getting walloped in Game 3, but they still need a good start on Saturday night. There are three games to go, and it feels like anything can happen.

NBA Finals Game 5 betting odds are via FanDuel Sportsbook as of Saturday, July 17 at 4:10 pm ET. For NBA Finals betting odds from other major online sportsbooks like BetMGM and PointsBet, check out our NBA odds.

Bucks Have to Take Home Formula on the Road

Even though there was much concern about whether he would play, and if he could play well, Giannis has been the constant for the Bucks in the NBA Finals. For the series, he is averaging 32 points per game and 14 rebounds per game and making highlight-reel blocks. He has been awesome. Even if the Bucks lose the series, he is good value to win NBA Finals MVP if he keeps this up.

When Milwaukee has won it has been because he has combined his awesomeness with that of other players. Forward Khris Middleton scored 40 points in Game 4, helping the Bucks even the series.

The numbers don’t lie though. Middleton and Jrue Holiday have been much better at home than on the road, so if the Bucks are going to take their first lead in the series, one of those two or somebody else is going to have to step up.

In the other category, there are not a lot of alternatives. This team is built very well around stars and role players, and I am not expecting guys like P.J. Tucker to unexpectedly make 7 of 10 shots and steal a playoff game.

The lone exception might be wing Pat Connaughton. He is getting a lot of minutes, but too often he is just hanging out on the perimeter waiting for the ball. I think they could use him a little more and exploit his athleticism. It will be interesting to see if they do anything schematically different in Game 5.

It looked like the Suns were going to take control of the NBA Finals on Wednesday, but they couldn’t hold off the charging Bucks in the fourth quarter.

In the loss, they struggled to find much on offense other than guard Devin Booker, who scored 42 points without even making a three pointer. His absence due to foul trouble late was significant in swinging the game.

The Suns are at their best when they are a balanced attack, but they were anything but that in Game 4. Booker got his 42 points, but no one else scored more than 15 points. Those came from forward Jae Crowder. As much as I like what he gives the team his role is not to be the second-leading scorer.

Point guard Chris Paul was not on top of his game in Milwaukee. In Game 4 he had only 7 assists matched with a very surprising 5 turnovers, including a decisive one in the final minute of the game. With the NBA Finals returning home, I am expecting him to have a much greater impact on the game, as we have seen throughout these playoffs. That should mean good things for players like Deandre Ayton and Mikal Bridges. Ayton is still clearing the boards, but his offense has been better at home in the playoffs.

With the series returning to Phoenix all even the Suns are favorites once again. They are winning 75% of their home games this season.

Tonight, the most pivotal game of the 2022 NBA Eastern Conference finals takes place in Boston, with the Miami Heat taking a 2-1 series lead into their matchup with the Celtics. In Game 3 on Saturday, the Heat took control early, outscoring the Celtics 39-18 in the first quarter and leading by as many as END_OF_DOCUMENT_TOKEN_TO_BE_REPLACED