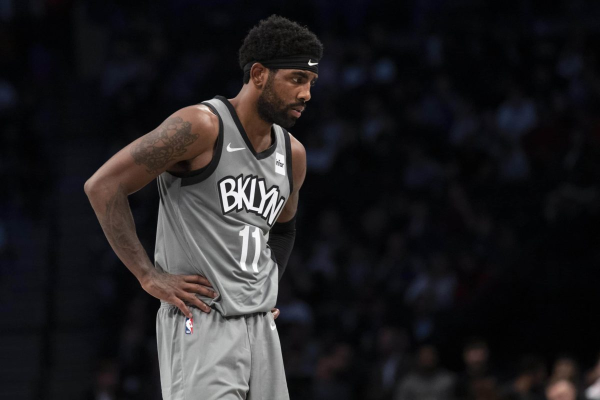 Despite blockbuster moves that brought the likes of Kyrie Irving, Kevin Durant, and DeAndre Jordan to Brooklyn this summer, Irving thinks the Nets need more. After Wednesday night’s 117-106 loss to Philadelphia, Irving said that the team will need at least one more piece to contend for a championship.

“I mean, it’s transparent. It’s out there,” Irving said. “It’s glaring, in terms of the pieces that we need in order to be at that next level.”

In the loss, Irving finished with 14 points on a 6-of-21 shooting performance. His inefficiency on the floor earned him a game-worst plus/minus of -29. Spencer Dinwiddie (26 points), Jarrett Allen (17 points), and Taurean Prince (15 points) all scored more than the star point guard.

Meanwhile, Brooklyn had no answer for a Philadelphia team playing without Joel Embiid. Tobias Harris led the way for the 76ers with a double-double by scoring 34 points and reeling in 10 rebounds.

The loss was hard enough to take for Irving that the star point guard felt the need to say, “Collectively, I feel like we have great pieces, but it’s pretty glaring we need one more piece or two more pieces that will complement myself, (Durant), DJ (Jordan), GT (Garrett Temple), Spence (Dinwiddie), Caris (LeVert), and we’ll see how that evolves.”

Is Irving overreacting to the loss, or does Brooklyn need to add more to compete in the Eastern Conference in the near future?

The Nets currently find themselves in a very peculiar position. While Brooklyn felt like it won the lottery by locking down Durant, Irving, and Jordan in free agency, the team is now struggling to keep a playoff position.

Entering the season, the struggle was always going to be how a team with newly-acquired championship expectations would handle a season without Durant, who continues to recover from an Achilles injury.

In addition to Durant’s absence, the Nets have had Irving on the floor for just 14 of their 40 games played so far this year.

So, are Brooklyn’s needs really “glaring,” or should Kyrie wait and see what this team looks like when Durant is healthy?

For his career, Durant has averaged 27 points, 7.1 rebounds, and 4.1 assists while shooting 49.3 percent from the field. While no one can be sure if Durant will be his MVP-level self once he returns from injury, it’s clear that Durant was one of the best two or three players in the NBA before going down.

If Durant is able to return to form with a healed Achilles, the Nets’ Durant-Irving duo should be one that rivals the likes of LeBron James and Anthony Davis with the Lakers and Kawhi Leonard and Paul George with the Clippers.

So, while Brooklyn doesn’t look like it has a chance to compete for a title this season, Durant will likely cover up a lot of those “glaring” needs once he returns.

Nets Struggling To Keep Up In East

Although the 18-22 Nets currently possess a playoff position, they trail the Eastern Conference-leading Bucks by 17 games and sit one spot behind the Magic in the standings.

That’s not what Irving and this Nets team expected coming into the season, so his frustration is understandable.

Yet the most disappointing thing about this Brooklyn team is how it has no shot to compete for the Eastern Conference title without Durant on the floor. With +3500 odds to win the conference, the Nets are seventh on the list of favorites.

If Durant comes back at 100 percent, he could be enough to put this Brooklyn team in contention. However, looking at what this team is now, Irving could be right about the Nets’ need to add pieces if Durant isn’t playing at the same level post-injury.