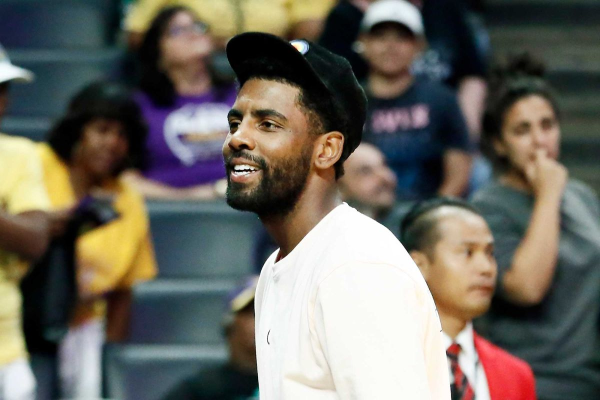 After a whirlwind of an offseason, the Brooklyn Nets seemed to go from “the other” team in New York to “THE” team in New York. In addition to signing free agents Kyrie Irving and DeAndre Jordan, the Nets landed the biggest fish of them all when they acquired Kevin Durant.

While the future looks very bright in Brooklyn, should we expect the 2019-20 Nets to be any good?

After all, Kevin Durant will be sidelined with the torn Achilles he suffered in the NBA Finals, and now the team’s new star point guard suffered a left-side facial fracture on Tuesday.

According to reports, the fracture occurred during a pick-up game when an elbow caught Irving in the face. It’s a rough start to Irving’s time in Brooklyn, with the preseason campaign starting Oct. 12 against the Lakers before opening the regular season against the Timberwolves on Oct. 23.

For now, Irving is officially day-to-day with his facial injury. If the injury doesn’t heal fully before the preseason gets underway, expect Irving to be wearing a mask, much like he did after suffering facial fractures in 2017.

However, Irving isn’t expected to miss meaningful time with this injury. Irving may not like wearing a mask, but he’ll bring his brand of elusive dribbling and his score-first mentality to the Nets either way.

Although the Irving injury likely sounds worse to fans than it really is, and the PG is unlikely to miss time, the excitement surrounding the Nets is hampered by the fact that Durant won’t be on the floor all year.

So, are the Nets a year away, or can they make some noise this season?

After signing a four-year, $141 million deal with Brooklyn, Kyrie will be the focal point of the offense this year. Irving is no stranger to having the ball in his hand, even when surrounded by the likes of LeBron James in Cleveland.

With perhaps the best handle in the NBA, a great jump shot, and the ability to finish around the rim when surrounded by players much larger than himself, Irving is a pure scorer that’s hard to find. So, Irving will be “the guy” in Brooklyn this year.

However, Irving was also the main piece of a Boston Celtics team that failed to meet expectations.

Surrounding Irving will be the likes of Joe Harris, Jarrett Allen, DeAndre Jordan, and Spencer Dinwiddie.

A cast like that doesn’t feel like a contender, but where should the Nets fit in when it comes to the Eastern Conference of the NBA?

The biggest challenge for the Nets this year is the division in which they play. The Atlantic Division in the Eastern Conference features the Nets, 76ers, Celtics, and Raptors.

Philadelphia appears ready to contend for a title, which is why they’re favorites in the division with -162 odds. The next three teams are very close, with Boston (+445) followed by Brooklyn (+500) and Toronto (+546) to win the division.

When it comes to the Eastern Conference, the picture actually looks slightly better for the Nets. While having the third-best odds to win your division doesn’t feel great, having the fourth-best odds of +928 to win the conference is a huge improvement for the Nets.

Interestingly, the Nets actually have better odds than Boston when it comes to winning an NBA Championship. While Brooklyn is sitting on +2396 odds, Boston is right behind with +2425 odds.

A strong Western Conference featuring the Lakers and Clippers claims most of the spots at the top of the board when it comes to NBA Championship odds, leaving the Nets ranked ninth.

So, while we shouldn’t expect Brooklyn to compete for a title without Durant, they should be a player in the Eastern Conference this year.