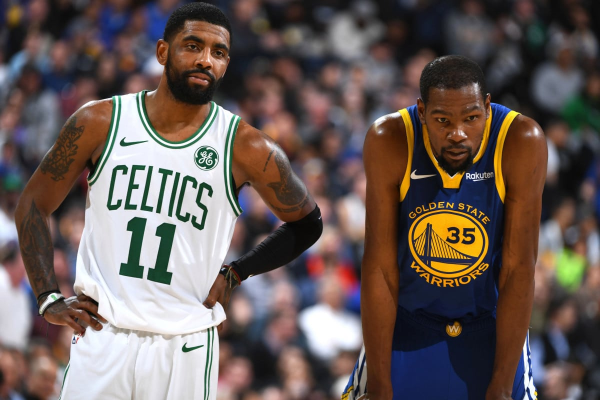 With the arrival of Kyrie and KD in Brooklyn, how does the shift of power affect the power balance out East?

With the arrival of Kyrie Irving and Kevin Durant in Brooklyn, the Nets have become one of the more favored teams in the NBA overnight. That said, it should be noted that Durant is out for the foreseeable future, but the arrival of Irving still transforms the Nets into one of the most dynamic teams in the league. While the odds are still settling as players make their final decisions, it’s important to analyze how the acquisition of these two players shifts the balance of power from the defending champions, the Toronto Raptors, to the Brooklyn Nets, who were at one time thought to be out of the running for Durant and Irving.

Should you put a sizable wager on the Nets to win it all? How does this impact the odds to win the Eastern Conference and the NBA Finals in 2020 for that matter? Well, the answers may surprise you.

Big Three All Over Again?

As of Sunday, the NBA media world has determined that the likes of Kyrie Irving, Kevin Durant, and DeAndre Jordan are heading to the Brooklyn Nets. While some will say it was a tremendous upset for the Nets to land these major players over the New York Knicks, in truth, it isn’t the first time the Nets have been able to land major names in an attempt to become an Eastern Conference power.

In 2014, the Celtics and Nets were involved in a trade that resulted in another significant shift in power in the Eastern Conference, just not overnight. Rather than changing the dynamics immediately, the Nets acquired Paul Pierce, Kevin Garnett, and Jason Terry, all of whom were well past their prime. By adding the aforementioned trio with Joe Johnson, Deron Williams, and Brook Lopez, many had predicted that the Nets would immediately challenge the Miami Heat, but those prognosticators would be greatly mistaken.

The Nets were unable to make it to the Eastern Conference finals, getting vanquished in the semifinals in five games by the far superior Miami Heat. While there is no comparison saying Kevin Durant and Kyrie are on the same level as a bunch of washed-up players, there is no telling how Durant will recover from his Achilles tendon injury. Kyrie Irving, while greatly talented, also has a history of injury woes. Jordan adds a much-needed presence in the middle for the Nets, who played notably small against the likes of the Philadelphia 76ers, and when the Sixers went big, it was clear they were unable to compete with larger, top-heavy teams like the Sixers.

The Nets get two of the league’s best individual scorers, and one of the more gifted true centers left in the NBA. Despite the addition of these talented players, immediate wagers on Nets futures are not advisable, as they will still have to compete with the Milwaukee Bucks. Milwaukee has proven its ability to push the pace and shoot the long ball, combined with a literal freak of nature like Giannis Antetokounmpo, and they still deserve respect as runners-up in last year’s Eastern Conference Finals.

While final odds have yet to be fully calculated, a bettor should be wary to snap bet on any Nets futures prices as, not only will they have no value, but it’s been recent history that teams that are quickly put together are rarely immediately successful.

Rest assured, when this team comes together, it absolutely has the potential to be a force to be reckoned with, but it’s essential to understand that in the beginning, there is certainly value in betting against the Nets, as they will have inflated spreads.