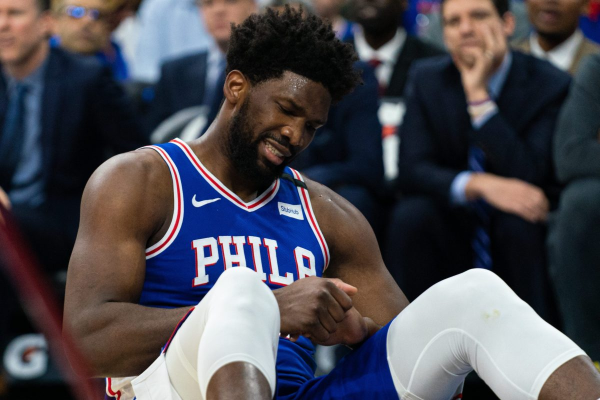 After meeting with a hand specialist following Philadelphia’s 109-98 victory over Boston, Philadelphia 76ers star Joel Embiid was scheduled to undergo surgery to repair a torn radial ligament in his left hand on Friday morning.

The decision to opt for surgery was made several days after Embiid suffered a badly dislocated left ring finger in Monday’s game against Oklahoma City.

According to reports, Philadelphia will be without its All-NBA center for the immediate future, as Embiid will be re-evaluated in one to two weeks.

For Philadelphia, playing without Embiid is nothing new. In his five-plus years with the 76ers in the NBA, the 7-2 center has played just 189 of 448 regular-season games. However, the absence of Philadelphia’s star player will be tough to overcome as it attempts to keep pace in a tightly-contested Eastern Conference.

Embiid’s latest injury issue will shift Philadelphia’s focus over to Al Horford, who the 76ers acquired in free agency for this type of situation. In addition to robbing Boston of the big man, Philadelphia now has a proven backup to its star center.

Now, two questions remain. How long will Embiid be out, and how well can the 76ers perform with Horford in his place?

In A Fight For Eastern Conference Positioning

The top of the Eastern Conference is perfectly clear, as the 33-6 Bucks have made the top spot their own. The next five playoff positions, however, are shaping up as a scrum, with several different teams aiming to gain control of the second seed.

A Philadelphia team that started the year well now finds itself in fifth place with a record of 25-14 after a four-game skid that carried into the New Year. The only thing holding the 76ers back from joining Milwaukee atop the conference has been their play on the road, as Philadelphia is a mediocre 7-12 away from home.

The 76ers own a 1.5-game lead over the 23-15 Pacers, which is currently the last team in the Eastern Conference with a winning record.

Directly ahead of Philadelphia are the 25-13 Raptors (fourth), who are 7.5 games back of the Bucks. If these positions were to hold for the remainder of the season, Toronto and Philadelphia would face off in the first round of the playoffs.

The other two teams in the crowded Eastern Conference race are the 27-10 Heat (second) and 25-11 Celtics (third), who are five and 6.5 games back of Milwaukee, respectively.

Without Embiid, the 76ers will need big performances from the likes of Horford, Tobias Harris, and Ben Simmons to keep themselves close to the teams directly ahead of them.

While we don’t know precisely how long Embiid will be off the court, we know that he won’t be available for the team’s two upcoming games in Dallas and Indiana. Those are both difficult games against a pair of teams each with 23 wins so far this year.

And without Embiid, the 76ers will be without his 23.4 points, 12.3 rebounds, and 1.4 blocks per game. Even if Horford can pick up the slack defensively, his offensive game pales in comparison to Embiid’s.

Because Philadelphia will be on the road and without its best player, it’s certainly within the realm of possibility that the 76ers will drop back-to-back games yet again.

In the case that Philadelphia goes on another losing streak while Embiid is out, or even if the 76ers go even in his absence, they’ll dig themselves a deeper hole in an Eastern Conference race they were supposed to be leading.

In fact, the 76ers are still the second favorite to win the conference with odds of +300. Although Philadelphia trails the favorite Bucks (+110), it is still significantly ahead of the Celtics, who own the third-best odds of +600 to win the Eastern Conference.

However, we could soon see the Pacers leapfrog the 76ers in the standings if the next couple of results go a certain way, putting Philadelphia in sixth in the East. If this sort of slide continues and the top contenders in the conference gain more of a lead, the 76ers risk losing their status as one of the favorites to reach the NBA Finals.