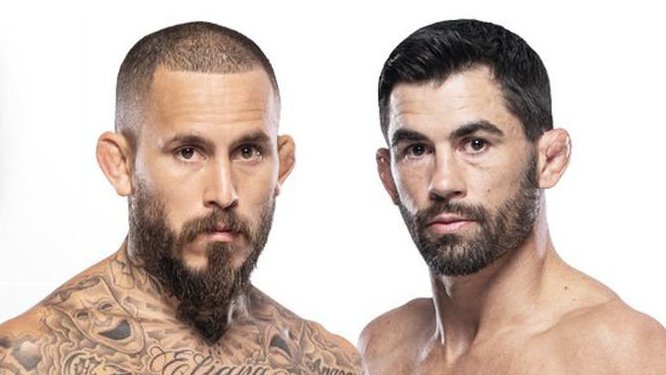 The stars of the UFC are set to take over the Pechanga Arena in San Diego, California for UFC on ESPN 41 on Saturday, Aug. 13. Not only is the card loaded, but it’s also the final stop before UFC 278.

Though there’s something for everybody this weekend, a large portion of fans is tuning in for the bantamweight main event between Marlon Vera (19-7-1) and former two-time UFC Bantamweight Champion Dominick Cruz (24-3).

Both men sit inside of the UFC’s top-10 bantamweight rankings as Vera clocks in at No. 5 while Cruz sits at No. 8. A victory for either competitor will surely bring them one step closer to a championship opportunity.

Here is a look at the latest Vera vs. Cruz odds from various sportsbooks before the duo collide on Saturday.

Vera Unanimous Favorite Over Cruz at UFC on ESPN 41

Vera is set to enter UFC on ESPN 41 as the unanimous favorite across the four highlighted sportsbooks. His best odds to win are on FanDuel Sportsbook at -250, which equates to an implied probability of 71.4%.

Since losing to José Aldo back in December 2020, Vera has won each of his last three fights. He’s overcome Davey Grant, Frankie Edgar and Rob Font over that stretch, recording two of those victories by unanimous decision while even earning ‘Performance of the Night’ honors against Edgar.

Vera is the UFC’s leader in all-time bantamweight stoppage wins with nine and it’ll be interesting to see if he can make it 10 against Cruz. Defeating a former champion is never an easy task, but it’s still a realistic goal for the 29-year-old Ecuadorian thanks to his recent momentum.

There was a point when Cruz was one of the most talked-about bantamweight fighters on the planet. A two-time champion, the San Diego, CA native had his momentum derailed when a slew of injuries held him away from the sport for nearly four years before returning in 2020.

After getting knocked out by Henry Cejudo in his return fight, Cruz has since won two fights in a row. He defeated Casey Kenney by split decision before going the distance and scoring a unanimous victory over Pedro Munhoz in his last outing.

Cruz has some added support with UFC on ESPN 41 taking place in his hometown, but it’s clear that his best fighting days are behind him. He’s now 36 years old and has only fought three times since in the last six or so years.

UFC on ESPN 41 Betting Markets & Trends for Vera vs. Cruz

FanDuel’s alternate markets help shed some light on exactly how Vera vs. Cruz could unfold at UFC on ESPN 41.

For those looking to bet on the exact method of victory, FanDuel has you covered. The likeliest outcome is for Vera to win by decision at +135. While he’s 4-7 all-time when his fights head to the judges’ table, he’s 2-0 the last two times his bouts have gone the distance.

As for Cruz, his favored method of victory is to also win by decision, however, at +280 odds. He’s made a living off longer fights, going 16-1 in matchups that have ended by decision.

Funny enough, FanDuel also has a market where the oddsmaker favors the upcoming bout to go the distance at -186 odds.

In terms of method and round combo betting, Vera is favored to win the fight by KO/TKO in the first round at +900 odds.

It’s hard to argue with Vera as the odds-on favorite heading into the weekend. He’s been facing tougher competition than his opponent has and it’s tough to trust Cruz given his injury history and the fact that he hasn’t looked like his old self.

When it comes to the best bet, I could see Vera winning by knockout at +300. Cruz was knocked out in his return to the octagon and it’s no secret that his body isn’t as strong as it once was. There isn’t much value on the moneyline and a longer fight suits Cruz, so stick with a Vera KO/TKO win.

UFC on ESPN 41 will take place at the Pechanga Arena in San Diego, California.

What time does UFC on ESPN 41 start?