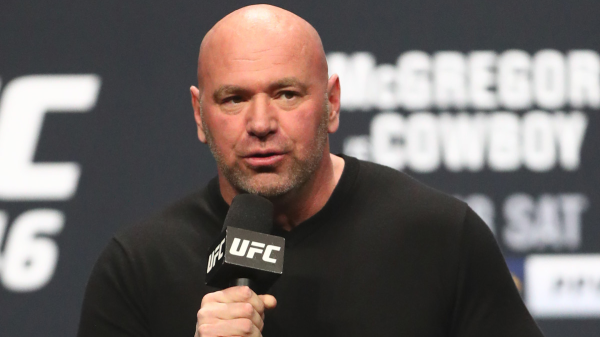 It’s no surprise to see a plethora of sports already beginning to eye optimistic return dates amid the coronavirus pandemic. It’s even less of a surprise that UFC president Dana White is taking the most aggressive approach.

After promising that his sports organization will be the first to resume a normal schedule, White has begun planning for an event on May 9 at a location not yet determined.

Despite the recent cancellation of UFC 249, which was scheduled to take place this weekend, White has announced that he’s deep into the process of filling out the fight card. White is clearly eager to get back after having to cancel four events scheduled between March 21 and April 18.

White was ready to move forward with the event this weekend, which was set to take place on tribal ground in California, but called it off when asked to “stand down” by ESPN, a UFC partner.

Now it appears that White is no longer content to wait for ESPN’s approval. While ESPN has not yet given or declined its blessing for a May 9 event, White has reportedly told the company he is targeting that date for a return.

The event was originally scheduled to take place in Rio de Janeiro, Brazil, but that will no longer be the case. For now, the location is undisclosed or not yet known.

Previous reports have hinted toward White purchasing and preparing an island to hold UFC fights. It’s currently unknown if that’s a possibility for the May 9 event.

There are still several obstacles standing in the way of a UFC event in early May — bout agreements are yet to be signed; a location is yet to be announced; it’s unclear if ESPN will be involved. If ESPN is out, it’s unclear how White will put on the event, but White has expressed his confidence in a full card.

The targeted lineup for this event has several well-known names amongst the fighting community:

Fresh off a fight against Conor McGregor, Donald “Cowboy” Cerrone has reportedly verbally agreed to a welterweight contest against Anthony Pettis.

Both Amanda Nunes and Felicia Spencer have publicly accepted a featherweight matchup.

Henry Cejudo and Dominick Cruz are set for a bantamweight title fight. Cruz has publicly accepted the match.

And although Khabib Nurmagomedov won’t be involved after having his fight with Tony Ferguson called off for the fifth time, Ferguson is set to take on Justin Gaethje in an interim lightweight title fight.

If White can pull off the event and be the first major sports organization to return to a normal schedule, his first event should have plenty of star power to make it a success.

Sportsbooks Offering Odds On May 9 Fights

While the UFC’s May 9 event is not yet official and doesn’t even have an announced location, sportsbooks are eager to put out odds for just about anything. So, bets can already be placed on the fights White is planning for.

Going into the Cerrone-Pettis matchup, Pettis is currently favored in a tight contest with odds of -120. Cerrone is sitting on odds of +102.

Nunes is a heavy favorite over Spencer in the women’s featherweight bout. While Spencer is getting +350 odds, Nunes is currently set at -500 to win the fight.

In the bantamweight title fight, Cejudo is a -194 favorite. Cruz is sitting on odds of +164 at the moment.

While most of the fights planned for the May 9 event are up on books like FanDuel Sportsbook, the Ferguson-Gaethje bout is not yet listed. Expect this fight to get odds as soon as a bout agreement is signed.

The pieces are beginning to come together for UFC’s return, which White is deadest on holding in early May. Many expect White to go forward even if ESPN pulls out.