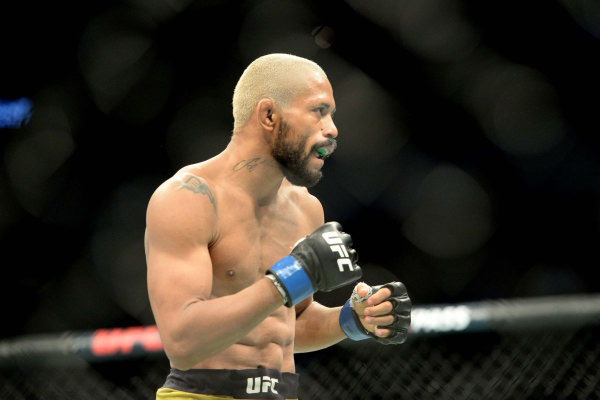 UFC on ESPN+ 27 (Fight Night 169) will host a main event title fight between Joseph Benavidez and Deiveson Figueiredo. The fight will be presented at the Chartway Arena in Norfolk, Va., on Feb. 29.

The flyweight championship belt is currently homeless since the previous champion, Henry Cejudo, decided to relinquish the title to defend his other bantamweight title.

Odds for the Main Event

With a vacant flyweight title up for grabs, anything is possible, and these two both deserve it. The odds for Benavidez and Figueiredo have been placed at:

Joseph Benavidez (28-5-0) has climbed his way to currently being the overall ranked fighter in the Flyweight division. He has staggered eight wins by knockout and nine by submission.

He has been around a long time and has fought some of the best fighters from this division and even beat the previous flyweight champion.

Deiveson “Deus Da Guerra” Figueiredo (17-1-0) has also made his way up the division, while currently being the third best fighter in the flyweight division. He has eight wins by knockout and five wins by submission.

These two fighters have similar fighting styles and impressive wins throughout the course of their careers. On paper, they have some subtle differences.

They both have a similar average fight time of a little over 12 minutes. Figueiredo has a slight reach advantage of 68 inches compared to a 65-inch reach of Benavidez.

Benavidez definitely knows how to land his hits while protecting himself.

One thing that is a little concerning for Figueiredo is that he will definitely be the aggressor here, and Benavidez will be playing it smart. He has done well in taking out his opponents this far and should stick to what he does best.

Benavidez will most likely try to avoid a striking match because I do not believe he is as quick as Figueiredo.

Overall, these two fighters have the potential to make this a great fight. This fight could also last a few rounds and maybe even the entire five. However, I believe that Figueiredo will be able to find an opening and use that powerful right hand to disrupt Benavidez.

If this turns into a ground game, I believe Benavidez has the advantage, and he surely will anyway since he has the experience to win in any situation.