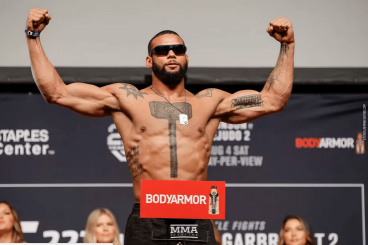 The UFC will head to Prague, Czech Republic this week on Saturday, February 23, 2019, for UFC on ESPN+3. This is one of the rare early start time events, which will start over on ESPN2 at 11:00 AM for the Prelims, followed by the Main Card kicking off around 2:00 PM ET. The event will take place at the O2 Arena in Prague, Czech Republic.

The Main Event for UFC on ESPN+3 will take place in the UFC’s Light-Heavyweight Division between Jan Blachowicz and Thiago Santos. Both of these guys enter the fight on a nice little win streak and will be setting themselves up for a potential upcoming title shot down the road.

Thiago Santos enters this fight with a record of 20-6. The Brazilian has gone 13-5 in the UFC and has won 14 of his 20 fights by KO. Santos is known for his very strong kicks that will set up his superior striking. Santos has very good hands, and if Blachowicz drops his hands to start defending those kicks, he will end up in a really bad spot and potentially on his back looking up at the lights.

Santos has really benefited from moving to 205 lbs. Since he has moved to the Light-Heavyweight Division, he no longer has the big weight-cut. He retains his power and has since finished both of his opponents at Light-Heavyweight. I think in this fight he is going to cause all sorts of problems for Blachowicz. Santos should get the win here late in the 2nd round by TKO.

In the Co-Main Event, we will see two big enormous heavyweights step inside the Octagon and face off. Stefan Struve will be taking on Marcos Rogerio de Lima in a three-round war. Both of these fighters are big and tall and very dangerous both on the feet and on the ground. This really is a great matchup of Heavyweights.

Stefan Struve is 28-11 and is 12-9 in the UFC. Struve has won 17 of his 28 fights by submission and overall, has won 89% of his fights overall by finish (8KO/17SUB). Struve has faced a handful of injuries throughout his career and finally feels that he is 100% healthy and ready for a war on Saturday Night.

Marcos Rodrigo de Lima enters this fight with a 16-5 record, 5-3 of which is in the UFC. Contrary to Struve, De Lima is a striker who has won 11 of his 16 fights by KO/TKO. De Lima has lost 3 straight fights against Marcin Tybura, Andrei Arlovski, and Alexander Volkov. De Lima has at times come in out of shape and has even missed weight two times at the Heavyweight limit of 266 lbs. De Lima has not fought since July 2018, so the 8 months off may be what was needed to get him back on track in shape and ready to fight.

This really isn’t the best fight to wager on as it can go either way. I can make an argument on why De Lima will win, but I can also make the argument that Struve will also win. One thing is for sure; there will be a finish in this fight. I just don’t see any chance that this fight goes the distance.

Our top play for UFC on ESPN+3 is Marco Polo Reyes over Damir Hadzovic. Polo Reyes is a well-rounded fighter that is comfortable on the feet or when the fight hits the ground. Hadzovic is a predominant striker that likes the fight to remain standing. This fight comes down to Hadzovic not being able to stop takedowns and Polo Reyes having some of the best ground and pound in the UFC’s Lightweight Division. Expect Reyes to go for the takedowns early and get the finish early in the fight. Play Polo Reyes +105 to get the win here!