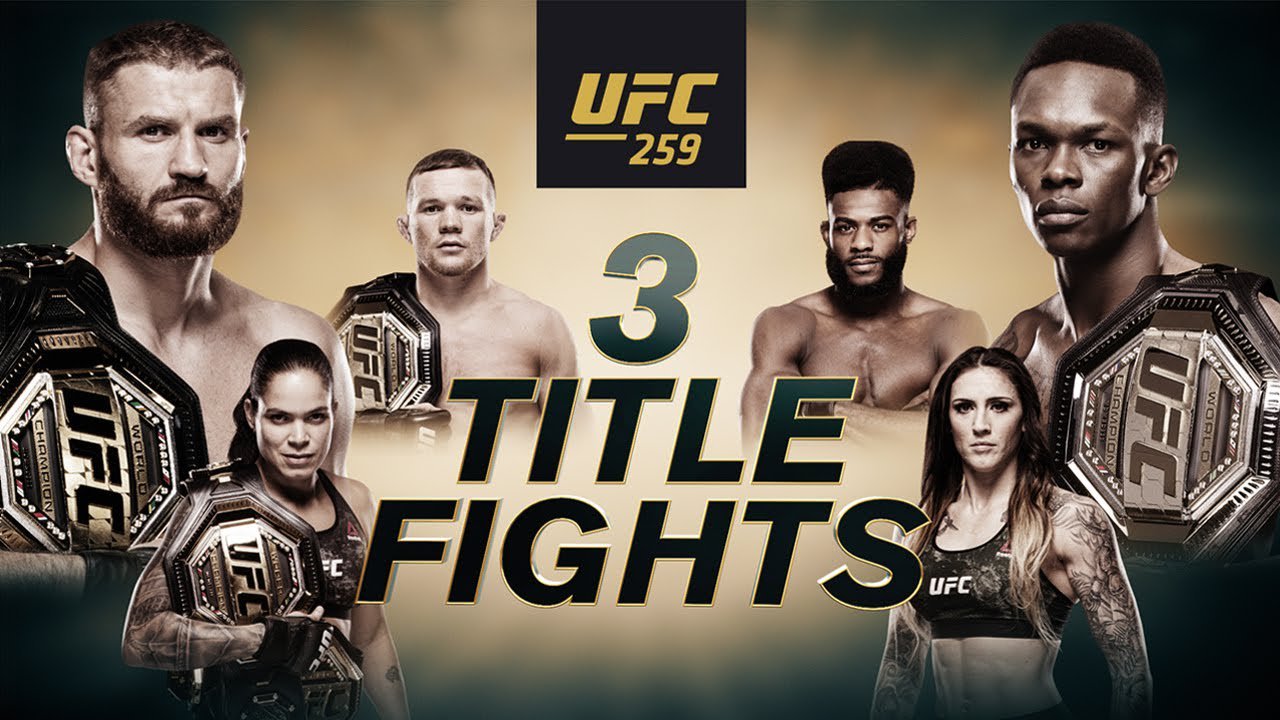 In what is easily the most stacked UFC event in recent history, three, yes THREE championship belts will be on the line at this Saturday’s UFC 259.

Petr Yan will attempt to defend his bantamweight belt against Aljamain Sterling. Amanda Nunes will look to add to her female GOAT status when she takes on Megan Anderson in a women’s featherweight championship fight. Finally, Israel Adesanya will attempt to add his name to the list of two-division champs when he challenges Jan Blachowicz for the light heavyweight strap.

All odds listed are per FanDuel Sportsbook.

Israel Adesanya has a chance to become just the fifth fighter in UFC history to be champion in two different divisions simultaneously as well as the eighth person to win a title in two different divisions. Standing in his way is current light heavyweight champion Jan Blachowicz who will be attempting to make his first title defense after winning the vacant belt in a TKO victory against Dominick Reyes at UFC 253 last September.

Adesanya has yet to lose in his professional MMA career, sporting a perfect 20-0 record with an astounding 15 wins coming via KO/TKO. He has also yet to be set as the betting underdog in his UFC career as he has nine fights within the promotion and his shortest odds to date was when he took on Robert Whittaker for the Middleweight championship as a -140 favorite.

Jan Blachowicz, on the other hand, is no stranger to being an underdog and he has absolutely thrived in that role. He’s been set as the underdog in eight of his last nine fights and he holds a record of 7-1 in those bouts. His sole loss over that span came to the hands of Thiago Santos in February of 2019.

It’s time to start putting some respect on Jan Blachowicz’s name. Despite rolling through his competitors over the last four years, oddsmakers continuously set him as the betting underdog almost every time he steps in the cage. Despite a rocky start to his UFC career, he’s seemingly found his stride as he’s won eight of his last nine fights with five of those coming inside the distance.

Despite his undefeated record, Adesanya has been known to take some damage in his fights, especially from kicks. Now that he’s going up a weight class, he’s going to face a fighter in Blachowicz who possess power that he hasn’t yet faced in his MMA career. The Polish fighter loves to mix kicks into his attack and one strong strike could send the Middleweight champion to the floor, as it has with many of his opponents in the past. Blachowicz is worth a shot here at +184.

The undisputed female GOAT of the MMA world will enter the octagon to defend her featherweight title against Megan Anderson. The odds tell the full story in this matchup as a win by Anderson in this fight would go down as the greatest upset in UFC history.

Nunes is the only fighter in the history of the promotion to successfully defend two titles at once. She has defended her bantamweight championship a total of five times and a win over Anderson on Saturday night will be her second successful defense of her featherweight strap. These will be the longest odds Amanda Nunes will be set at in her UFC career.

Megan Anderson has been awarded a shot at the champ almost by default as the women’s 145 lbs. weight class is virtually empty of competitors. So much so that they don’t even have official UFC rankings for it. She’s entering the fight with a 11-4 record in her MMA career and she’s currently on a two-fight win streak.

Nobody in their right mind is laying -1800 juice on the champion to defend her title, but you can get quite a bit more value on her to win the fight via KO/TKO. 13 of her 20 professional wins have come by stoppage via strikes so getting -110 odds on this fight to finish in the same fashion is great value.

Don’t waste your money with a bet on the challenger in this co-main event.

Arguably the most intriguing title fight on the card is the bantamweight championship bout between Petr Yan and Aljamain Sterling. Yan will be attempting his first defense of the bantamweight title after winning the vacant strap in a fight against Jose Aldo in July of last year. Sterling will enter the octagon on a five-fight win streak capped off by a submission victory over Cory Sandhagen in a title eliminator bout last June.

These are the shortest odds that Petr Yan has been set at in his UFC career. The next shortest odds came in his title fight against Aldo in which he was set as the -240 favorite on his way to a masterclass performance. Meanwhile Aljamain Sterling will enter the bout with a UFC record of 2-2 when set as the betting underdog.

It’s surprising to see Petr Yan’s odds set as a pick’em after what has been a completely dominant run in his UFC career. The Russian fighter holds just one loss in his mixed martial arts career and that came via controversial split decision loss to Magomed Magomedov in the Russian promotion ACB in 2016. He went on to avenge that loss a year later.

Aljamain Sterling will have to find a way to counter Yan’s striking output as the champion lands an astounding 6.32 significant strikes per minute. This unrelenting pace proved too much for the former featherweight champion, Jose Aldo, to handle in their fight for the vacant strap.

Sterling’s path to victory will come with his submissions game as 8 of his 19 wins have come that way including his most recent bout against Cory Sandhagen. Getting Yan to the ground could prove difficult as Sterling’s takedown accuracy is just 29% while Yan has a takedown defense rate of 88%.

Getting -110 odds on the current champion in this fight is a gift that’s too good to pass up.