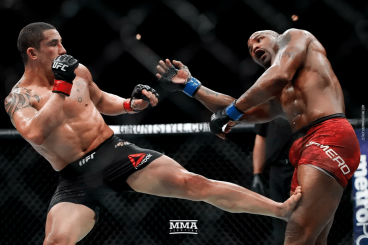 The UFC heads to Melbourne, Victoria, Australia this week for UFC 234. The card will get started at 5:00 PM ET over on UFC Fight Pass for the Early Prelims, then head over to ESPN for the UFC 234 Prelims at 6:00 PM, and finally the Main Card will be presented on Pay-Per-View.

The Main Event of the evening will feature an exciting and anticipated bout for the UFC Middleweight Title as current champ Robert Whittaker looks to defend his title against #4 Middleweight Kelvin Gastelum.

In the Co-Main Event, we will see an old hungry panther taking on an eager young lion as former UFC Middleweight Champion and MMA Legend Anderson Silva takes on Israel Adesanya.

We will break down both of these fights in a little bit and give you both of our picks for the fights. In addition, there are a total of 12 fights on the card, most of which are relatively newer UFC fighters that don’t have a ton of experience. There are 13 fighters on this card that have less than 3 fights in the UFC, many of which are making their UFC debuts.

The Main Event on Saturday Night is for the UFC Middleweight Title as current champion Robert Whittaker looks to defend his title against Kelvin Gastelum. Whittaker has been sidelined with various injuries, which have limited him to just 2 fights in 18 months, both of which were against Yoel Romero.

Whittaker won both fights against Romero and now is riding a 9-fight win streak. Whittaker has run through the UFC’s middleweight division and now faces what could be his toughest opposition in Kelvin Gastelum.

Gastelum is coming into this fight riding a 2-fight win streak that includes wins over Ronaldo Souza and former UFC Middleweight Champion Michael Bisping. Gastelum is a BJJ Black Belt under 10th Planet Jiu-Jitsu under Brian Beaumont. Gastelum is 16-3, and after failing to make weight at the Welterweight Division, he made the move to Middleweight, where he has found his true success.

This should be a great fight. Both fighters have keys to winning the fight, and each has the ability to pull off the win. However, the one thing that separates the two is the striking of Robert Whittaker. He is one of the hardest-hitting middleweights and has pinpoint accuracy. He throws a lot of shots and should be able to land a significant amount on Gastelum, who tends to come in unprotected for takedowns.

If that happens here, Gastelum will end up looking up at the lights with Whittaker getting his hand raised as the winner. I think Whittaker finishes him in the 3rd round.

This is a very interesting fight as we will see one of the greatest of all time, Anderson Silva, taking on an undefeated UFC fighter with a 15-0 record in Israel Adesanya. Silva enters the fight with a 34-8 record overall but has lost 5 of the last 6 fights overall. He won his last bout against Derek Brunson, but that was 2 years ago, on February 11, 2017.

Silva will be taking on a hungry young lion in the undefeated Israel Adesanya. Adesanya is 15-0 and has some of the most unawkward striking in MMA. Adesanya is a long, lanky fighter, very similar to what Silva was when he was in his prime. Adesanya has gone 4-0 in the UFC since joining the promotion and now stands ready to potentially set himself up for a UFC Middleweight Title fight.

As much as I would like to believe that Anderson Silva can pull off some sort of crazy victory, I just don’t see it happening. Adesanya is a special talent that just doesn’t come along every day. If Silva comes into this one in good shape, he may last until later rounds, but we have to remember that he will be 44 years old in 2 months. Adesanya wins this one by decision!

There isn’t a ton of value on this card unless you like risking it with big underdogs, which I won’t do. My top play would be Rani Yahya over Ricky Simon. Yahya is even money at +100, but there is no reason that he isn’t a -200 favorite. Yahya has some of the best grappling and Jiu-Jitsu in the UFC and without a doubt the best in the Bantamweight Division. Simon, on the other hand, has yet to face anyone with the grappling like Yahya. He faced Montell Jackson and Merab Dvalishvili, both of which he could have very easily recorded the loss. I think this one ends very early in the first round with Yahya getting his hand raised.