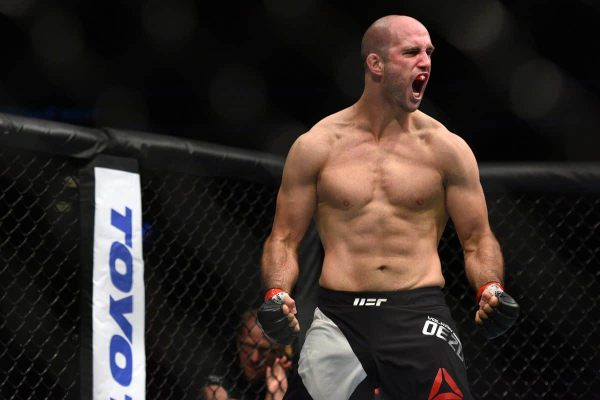 After a short three week vacation from the UFC, they return this weekend from the Avenir Centre in Moncton, New Brunswick, Canada for UFC Fight Night 138: Volkan vs. Smith.  There have been some changes to this card and even here on Tuesday, when we are writing the article, I expect at least one more significant change to happen before Saturday’s big fight card.

The Main Event will feature two Light Heavyweight fighters that are looking to secure a win and earn a title shot in the near future.  Volkan Oezdemir will take on Anthony Smith on Saturday Night in the Main Event.

Oezdemir is 15-2 and is coming into this fight off a 2nd round TKO loss at the hands of multi-weight champion Daniel Cormier.  Cormier is the Heavyweight and Light-Heavyweight Champion but now that Jon Jones is on his way back to the UFC, it will remain a mystery to see if Cormier moves back down or remains at heavyweight to defend his title.

Oezdemir was riding a 5 fight win streak prior to his loss with Cormier and will now look to get back on track in what should be a stand up striking battle with Smith.  Oezdemir has KO’d 2 of his 4 UFC opponents and is hoping he can find success against the tough striker in Anthony Smith.

Smith is 30-13 and is riding a 2 fight win streak in the Light Heavyweight Division. Smith has gotten 1st round KO’s on legends Mauricio Rua and Rashad Evans in back-to-back fights.  Smith is a tall striker that likes to utilize his kicks to set up powerful punches and takedowns.

This should be a very good battle if you like stand up wars. Smith is a great fighter but his wins have been over guys that realistically don’t belong fighting.  He has been making a living beating up on senior citizens, or those close enough and now he faces someone with legit KO power. Oezdemir should have no problems taking out Smith early in the first round and getting back on track with the UFC Fight Night 138 win.

Our top play for UFC Fight Night 138 is going to be Arjan Bhullar over Marcelo Golm.  Bhullar is a world-class freestyle wrestler that competed in the 2012 Olympic games. Bhullar uses his wrestling to set up his strikes.  His opponents will not throw kicks because he will take them down with ease and capitalize on the advantage on the ground. That is going to be a major problem for his opponent, Marcelo Golm, who doesn’t have any real wrestling experience.  Play Bhullar at -200 on Saturday Night for the win!

Our second play of UFC Fight Night 138 is going to be Gian Villante over Ed Herman.  Herman is a fan favorite but the reality is he doesn’t have the chin to compete at this level anymore.  He has been KO’d in 2 of his last 3 losses and is now facing a very tough wrestler that has a very good chin.  Villante can take a beating and keep on coming at you and that will be a major issue for Herman. I see Villante getting the KO late in the 1st round here at -250