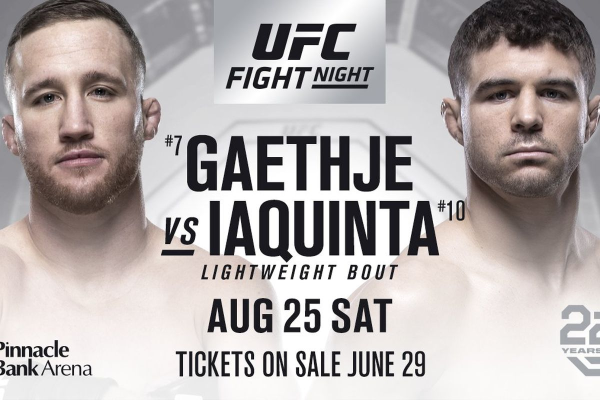 The UFC returns on Saturday Night after having off for a few weeks and this time, they are out in Lincoln, Nebraska for UFC Fight Night 135. This card isn’t exactly one that write home about but still should be some barnburners. There are 13 fights scheduled for the card highlighted by the Main Event between Justin Gaethje and James Vick. These two have thrown words back and forth at each other and looks to be a great fight to headline the card.

For those wondering where you can watch this card, the brass of the UFC has it split up between the UFC Fight Pass, Fox Sports 1 and Fox Sports 2.

The Early Prelims will be held on UFC Fight Pass starting at 6:30 PM ET. The Prelims will consist of 4 fights and will be on FS2 at 8PM ET and the actual Main Card, will begin at 10PM ET over on FS1.

The top play for UFC Fight Night 135 is Drew Dober -193. Dober has improved in each of his last 2 fights, winning battles against Frank Camacho and Josh Burkman. He has won 4 of the last 5 fights overall with the only loss coming by way of a Rear Naked Choke at the hands of BJJ practitioner Olivier Aubin-Mercier. Dober has been out of the cage since January and will be hungry back in there. His opponent, Jon Tuck, hasn’t been in the cage since June of 2017. Cage Rust is legit and should play a major factor in this fight. Dober wins late in the 3rd rd by GNP.

The Top Underdog for UFC Fight Night 135 is going to be George Sullivan. It’s funny how the MMA “So-Called Experts” bash Mickey Gall when he faces someone like CM Punk and say he shouldn’t be in the UFC but then when he faces a UFC veteran like Sullivan, Gall is the -370 favorite? It truly makes no sense but anyways, the fact is Gall has one chance to win this fight and that is by submission. The problem with that is Sullivan does really well against people trying to take him down. Sullivan has a really good takedown defense and what most people don’t realize is he trains with BJJ Black Belt Kurt Pellegrino, who will have Sullivan fully prepared if this fight hits the ground. I don’t expect Gall will be able to get Sullivan to the ground and as we have already witnessed, Gall can be jolted by a few hard shots. Here is another little tidbit, Sullivan hits really hard! He literally has that one punch, Dan Henderson like, KO power and if he lands a shot along Gall’s chin, Mickey will be sleeping!