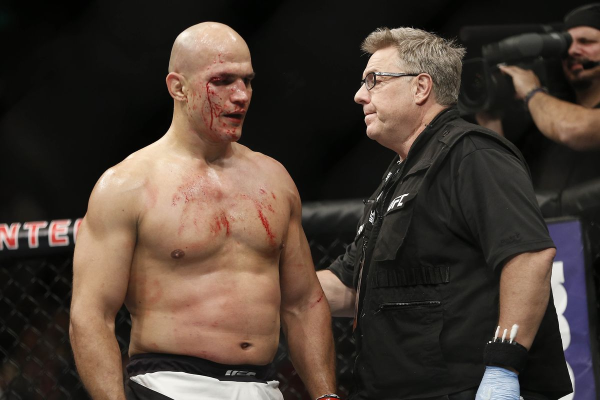 The UFC returns this week for UFC Fight Night 133 after wrapping up a big week last week at International Fight Week.  This event will be hosted at the CenturyLink Arena in Boise, Idaho and is slated to get started at 6:30 PM ET. This card can be watched by UFC Fight Pass and FS1. There are 13 fights scheduled to take place at UFC Fight Night 133 and there are some really good fights that will go down Saturday Night.

The Main Event will feature former UFCHeavyweightChampion Junior Dos Santos taking on former Bellator Title contender and former WSOF Heavyweight Champion Blagoi Ivanov.  Ivanov will be making his UFC debut on Saturday Night, which is very unique as most fighters making their UFC debut would not be highlighting the show as the Main Event. Ivanov is very tough to prepare for as he is a very strong grappler, that has decent striking.  He will have his hands full with a world class striker like Dos Santos.

Dos Santos has fought some of the toughest competition in the world including Stipe Miocic, Shane Carwin, Frank Mir, Cain Velasquez, Mark Hunt and Alistair Overeem.  Dos Santos has won 11 of his 18 wins by knockout and his striking is much like a boxers. Most heavyweights don’t move like Dos Santos and most do not have the striking, like he has.  He makes it very difficult for his large, much heavier opponents to keep up pace and striking with him.

Dos Santos should be able to wear down Ivanov and use his cardio to his advantage.  I just don’t see Dos Santos allowing the newby to come into the UFC and win this fight.  Junior wins the fight in the second round.

Our top play for UFC Fight Night 133 will be LizCarmouche over Jennifer Maia.  Carmouche is coming off a split decision loss, which most people scored in her favor.  That being said, the judges scored the fight for Alexis Davis and she got the win. Jennifer Maia will be making her UFC debut and she comes with a decent amount of experience.  Her past two fights came against UFC veteran and current fighter Roxanne Modafferi and at the time, undefeated 10-0 prospect Agnieszka Niedzwiedz. It is very difficult to make your debut and even tougher when you’re making it against someone with the wrestling skills like Carmouche.

There really isn’t a ton of underdogs with decent value on this card.  Basically, the entire card is a rundown of a coin toss with very close odds.  One fight that I do sway to is Eddie Wineland over Alejandro Perez. There is a definite difference in opposition between who Wineland has fought and who Perez has fought.  Wineland, granted is just 2-3 in his last five fights, while Perez is 4-0-1, but you have to consider who each of these guys have fought. Wineland has lost to John Dodson, Bryan Caraway and Johnny Eduardo, while beating Takeya Mizugaki and Frankie Saenz.  Perez on the other hand has beat Matthew Lopez, Iuri Alcantara, Andre Soukhamthath and Ian Entwistle, while getting a draw with Albert Morales. Not really much competition there for Perez, so I am leaning to Wineland at +150