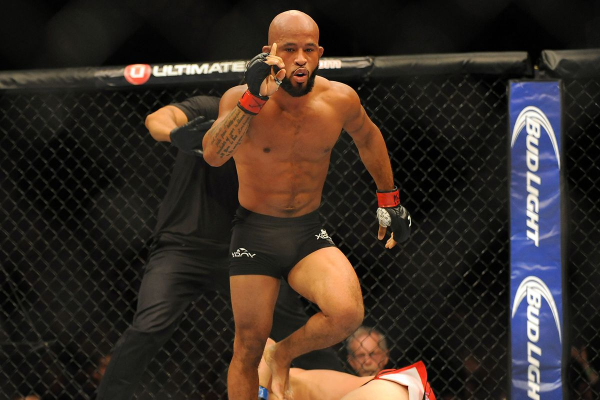 UFC 227 will take place this weekend from the Staples Center in Los Angeles, California. The event will get started on Saturday Night at 6:30 PM ET and will feature 12 fights inside the octagon.

The Main Event and the Co-Main Event are both title fights that are rematches from previous encounters, both of which were also title fights. In the Main Event, we will see TJ Dillashaw look to defend his UFC Bantamweight crown against the man the beat for the title, Cody Garbrandt. These two fighters use to be teammates and now are bitter rivals. Dillashaw use to train at Team Alpha Male with Garbrandt however he left to go with Duane Ludwig when “Bang” opened his own training facility.

If Dillashaw wins this fight, he will most likely move down and face Demetrious “Mighty Mouse” Johnson for the Flyweight Title. If Garbrandt wins this fight, he will most likely remain in the Bantamweight Division and face either Marlon Moraes or Dominick Cruz in a rematch. Either way, there are tons of options for both fighters, for whoever wins the fight. The other option if Garbrandt wins the fight would be for him to give an immediate rematch to Dillashaw as the trilogy fight……which is the most likely outcome following UFC 227.

In the Co-Main Event, we will see Demetrious “Mighty Mouse” Johnson looking to make his 12th UFC Flyweight Title defense when he faces Olympic gold medalist Henry “The Messenger” Cejudo. Cejudo entered the UFC with a ton of hype and ran off 4 straight victories, before earning a title shot against Johnson. In that fight, Cejudo was greatly overwhelmed and knocked out in the first round.

Since the first fight with Johnson, Cejudo has gone 2-1 and is questionably undeserving of this title fight but the truth is, the UFCFlyweightDivision is one of the weakest divisions in MMA and there really is no one else at this point in time, available for Johnson to fight. DJ is without a doubt one of the pound-for-pound greatest fighters among all time and will be tough to beat with his endurance and confidence.

The top play for this week is CodyGarbrandt at basically even money. Garbrandt wants his title back and is as hungry as anyone to redeem himself. For Garbrandt, it is more about personal vendetta against TJ Dillashaw and Duane Ludwig than it is of saying he is the champion. Sure, it is every fighter’s dream to be the champ but this is personal for Cody and he wants nothing more than to shut TJ up and knock him out!

UFC 227 Underdog with a Shot Play

The Underdog with a Shot this week will be Kyung Ho Kang at +190. Kang has enough top pressure once the fight hits the ground to completely nullify his opponent. He is very active from the ground and will constantly be looking for submission attempts. His opponent is a quality opponent and rightfully the favorite due to the striking advantage but I still think that Kang can hang with him. He is an underdog for a reason but undoubtedly has a shot at winning this fight.