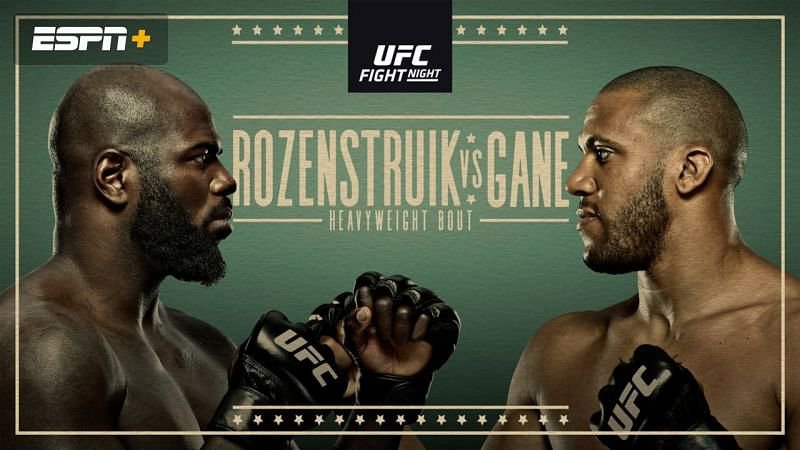 The UFC is set to host its fourth event in as many weeks this Saturday at the APEX Center in Las Vegas. Just like last week’s event, this week’s card is headlined by a heavy weight bout between two up and coming contenders. Jarizinho Rozenstruik will take on Ciryl Gane in a five round main event fight.

These two heavy weight fighters will enter the octagon on Saturday night with just one loss between the two of them as Jairzinho Rozenstruik enters the fight with an 11-1 professional record while Ciryl Gane is an undefeated 7-0 in his young career.

Rozenstruik is set as the betting underdog for just the third time in his UFC career. He defeated Júnior Albini as a +130 underdog in his UFC debut but lost to current title contender Francis Ngannou as a +200 underdog in May of last year. Rozenstruik, who is currently ranked No. 4 in the UFC heavyweight rankings, will put himself in the conversation for a title with a win over Gane.

Believe it or not, these are the shortest odds Ciryl Gane has had in his UFC career. Without even being in danger of losing any of his seven professional fights, he’s deserving of being a heavy favorite in every bout until proven otherwise.

Ciryl Gane, despite only being seven fights into his career, seems to be on a path to a title shot as he’s dismantled every opponent in his way with extreme ease. He has something that a lot of other heavyweights don’t have which is versatility. Not only does he have knockout power but he has fantastic cardio, wrestling, and submission capabilities.

Rozenstruik, while possessing some major power, is extremely one dimensional and will struggle against a fighter with the skill set of Gane. Gane’s biggest strength may be his defense as he has a significant strike defense of 73% which is extremely useful in the heavyweight division. If you don’t want to eat the -290 juice, taking him to win inside the distance at -120 is a fantastic bet to make.

Just like Ciryl Gan, Magomed Ankalaev has been set as a sizable betting favorite in every single one of his UFC fights. His sole loss in his MMA career came in his UFC debut when he lost to Paul Craig via submission despite being set as a -700 betting favorite. Ankalaev has now won five-straight fights since that loss with four of those coming via KO/TKO.

Nikita Krylov will try to fulfil his role as spoiler as he’s aiming for his second straight win after an unanimous decision victory against Johnny Walker in March of 2014. Krylov isn’t a stranger to being set as the betting underdog as this will be his third straight fight with his odds set at plus-money. He’s 3-2 throughout his lengthy UFC career when set as the ‘dog.

The fact that the odds are set at -110 for Ankalaev to win by KO/TKO tells you all you need to know. The Russian has been a dominant force through his mixed martial arts career as nine of his fourteen wins have come via strikes. He also lands at a pretty fast pace of 3.58 significant strikes per minute.

Nkita Krylov isn’t exactly known for his defense as he has a significant strike defense of just 41% and he absorbs an average of 2.45 significant strikes per minute. This fight has a Magomed Ankalaev TKO finish written all over it.

The third most intriguing fight on this weekend’s UFC Fight Night 186 card is a bantamweight rematch between two fighters ranked in the top 10 of the bantamweight division in Jimmie Rivera and Pedro Munhoz.

Rivera and Munhoz fought once before back in November of 2015 when Rivera won the close fight via split decision. Rivera has since gone 5-3 with his most recent bout being an unanimous decision win over Cody Stamann last summer. Rivera was set as the +150 underdog in their original bout but will now be favored in the rematch with his odds set at -152.

Munhoz has gone 7-3 since that 2015 bout but has lost two-straight fights heading into Saturday’s rematch. His most recent bout was a split decision loss to Frankie Edgar in August of last year. Munhoz isn’t getting any younger as he’ll enter the octagon at 34 years of age on Saturday.

It’s been proven over the long term that it’s profitable to back the fighter who won the original bout when two fighters meet for a second time. Despite the close result in the original fight, many people think Rivera is entering the prime of his career and there’s no reason to believe he’ll struggle against an aging Munhoz. Riveria also out struck Munhoz in their first fight, 96-66. Expect a similar result the second time around.

Two of the expected contenders in the National League open a three-game series on Monday evening as the New York Mets visit the San Francisco Giants. In the opener, David Peterson will get the start on the mound for the Mets, while Alex Cobb will get the ball for the Giants. While the Mets continue END_OF_DOCUMENT_TOKEN_TO_BE_REPLACED