Nationals Come From Behind To Force Game 7 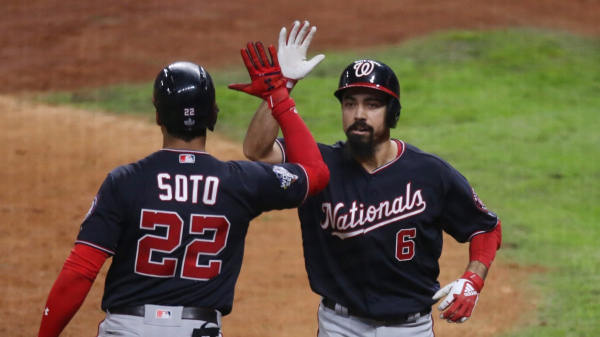 With Justin Verlander on the mound holding a 2-1 lead at home in Game 6 on Tuesday night, the stage was set for the Houston Astros to win their second World Series in three years. Instead, the Washington Nationals came from behind to beat Verlander, beat the umpires, and beat the Astros in Game 6, forcing a decisive Game 7 on Wednesday night.

If Washington ends up winning Game 7 and claiming the World Series title, we’ll likely look back on this series and their postseason run with three players in mind: the masterful Stephen Strasburg, the cool and calm Anthony Rendon, and the explosive Juan Soto.

Those three players have carried the Nationals through October, and Tuesday night’s Game 6 was no exception.

After giving up two runs in the first inning and falling behind, Strasburg pitched an absolute gem into the ninth. In total, the Nationals ace struck out seven and allowed two earned runs on five hits over 8 1/3 innings.

Soto’s solo home run — two batters after Adam Eaton tied the game at 2 — in the fifth gave Washington a 3-2 lead. It was Soto’s fifth homer of October.

Yet an intense 3-2 game was still up in the air in the seventh with Washington batting and Yan Gomes on first after a leadoff single. Trea Turner hit a ground ball back to Houston pitcher Brad Peacock, who threw to first and hit Turner, allowing the runners to advance to second and third.

But the umpires then ruled Turner out for stepping out of the baseline on the throw to first. The controversial call clearly favored the Astros, and the Nationals took it personally.

The rest was up to Rendon, and he delivered.

Rendon hit a two-run homer following the controversy to give Washington a 5-2 lead and put the Nationals in control. Rendon finished 3-for-4 with five RBI with Washington’s back against the wall.

Now, after a 7-2 victory in an eccentric series in which a home team has yet to win a single game, we’re headed to a winner-take-all Game 7 in Houston with everything on the line.

After 162 regular-season games that whittled 30 teams down to 10 and a full October that carved 10 down to only two, it all comes down to one final game of the 2019 MLB season.

On Houston’s side is home-field advantage for a team that won a league-best 107 games this year. On Washington’s side are a relentless squad and the fact that the away team has won each of the first six games of the World Series.

It must feel like destiny for Scherzer, who was unable to pitch in Game 5 after neck and back spasms rendered him unavailable. With 34 strikeouts in 25 October innings, Scherzer owns a 2.16 ERA in his five appearances this postseason.

Featuring a five-pitch arsenal, Greinke will hope for similar results from his Game 3 outing. In that contest, Greinke was able to put out fires throughout his 4 2/3-inning start in which 10 Nationals reached base, but only one run was scored.

We’ll know the victors of the 2019 baseball season by the end of the night. So, who wins the World Series?

Do the Odds Favor Washington or Houston?

A strange series that saw Houston begin as the biggest World Series favorite in over a decade with -235 odds swung in favor of Washington after the Nats claimed a 2-0 series lead. Then three straight wins made the Astros heavy favorites once again before the Nationals tied it all up in Game 6.

So, as we head into the deciding Game 7, who’s the favorite?

With Greinke leading a team that won 107 games, the Astros are the Game 7 favorites with odds of -132.

Being the underdog won’t phase Washington, though, as the dog has won the vast majority of games throughout this World Series. And after entering the divisional round with the worst odds of all eight remaining teams at 18/2, the Nationals are used to pulling the upset.