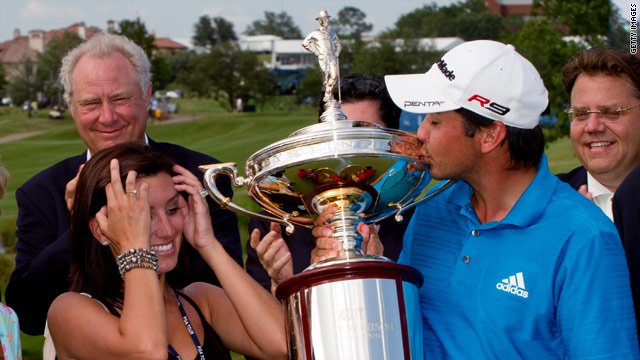 The golf world has been buzzing with excitement as the next major tournament — the 2022 PGA Championship — is less than two weeks away. But before we get to that, there’s one more stop on the 2022 PGA TOUR: the AT&T Byron Nelson.

Held annually at the 7,468-yard TPC Craig Ranch in McKinney, Texas, the AT&T Byron Nelson offers golfers a chance to gain some momentum ahead of next week’s PGA Championship. It’ll begin on Thursday, May 12 before concluding on Sunday, May 15.

Lee Kyoung-hoon shocked the world last year when he won the event by finishing a tournament-record 25-under-par. Needless to say, fans will be on the lookout for any other surprising performances this week.

In the meantime, here’s a look at the odds and some of the best bets to make ahead of the 2022 AT&T Byron Nelson.

Scottie Scheffler is also the early favorite to win the 2022 PGA Championship, making him a solid option to win this week’s AT&T Byron Nelson.

The 25-year-old phenom is in the middle of a 2022 PGA TOUR to remember, having already won four of the 14 tournaments he’s entered this season.

Each of Scheffler’s four victories — including one at the Masters Tournament — have come within his last seven outings, which further proves the run that he’s on. On top of that, he also has T-7 and T-18 performances during that stretch.

It’ll be interesting to see how Scheffler fares in his return to TPC Craig Ranch. Last year was his third-ever time competing at the AT&T Byron Nelson, resulting in him placing 47th after going 11-under-par. Before that he placed 22nd in 2014 and 35th in 2019.

Nevertheless, Scheffler has proven that he has a legitimate shot of winning every event that he enters this year. Unless something unforeseen happens, it should be business as usual for him later this week.

However, aside from his second-place showing in 2022, Burns’ only other AT&T Byron Nelson appearance ended with him placing 72nd in 2019.

The good news for Burns is that he’s been one of the better golfers on the tour lately, racking up a trio of top-10 finishes in his last five events played.

One of those performances involves Burns taking home the Valspar Championship back in March, while another saw him finish in second place at the Zurich Classic of New Orleans only a few weeks ago.

The most dangerous golfers are the ones who start a hot streak at the right time. That’s exactly what Burns has done and it wouldn’t be a shock if he was in a battle for first place at TPC Craig Ranch come Sunday.

Brooks Koepka is another name to watch ahead of the 2022 AT&T Byron Nelson, providing bettors with some solid value at +2900 odds.

Although he’s yet to win the annual event, Koepka has had some noteworthy performances at the AT&T Byron Nelson over the years.

Koepka’s best performance at the event came in 2016 when he placed second, losing to Sergio Garcia in a playoff. Aside from that, he’s also placed 16th in 2015 and fourth in 2017.

Unfortunately, Koepka did fail to make the cut in the 2021 edition of the tournament.

In fact, failing to make the cut is something that Koepka has done four times in his last eight outings this season. On the other hand, he’s also placed T-16th or better in his other four appearances, which include a pair of top-5 placements as well.

Even though Koepka’s performances have been hard to predict in recent months, he can still bring his A-game at a moment’s notice. With him looking to gain some momentum ahead of the PGA Championship, look for him to give it his all in McKinney.

If you’re looking to get even more value out of your money, consider going with Jason Day at +4500 odds.

The 34-year-old has had his ups and downs throughout the season but has placed top-15 in each of his last two outings. On top of that, he has a pair of T-3 finishes this season, which shows that he can come close to getting the job done.

Furthermore, Day has one of this week’s competitors that has previously won the AT&T Byron Nelson, achieving said victory in 2010. He also has three top-10 performances since then, which includes a second-place finish in 2017.

Max Homa proved last week at the Wells Fargo Championshipthat going with a big underdog can pay off, which is why it’s worth going with Day at TPC Craig Ranch.