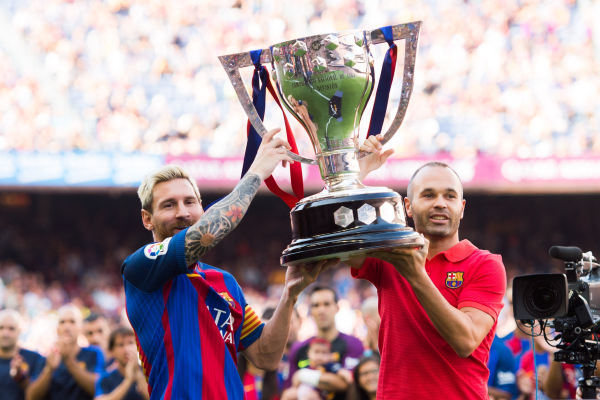 FC Barcelona were crowned champions of the 2017-18 season of La Liga, winning the title from rivals Real Madrid. It was a double-winning season for the Barcelona also having won the Copa del Rey. They were top of the table from the 3rd all the way to the 38th and final matchday of the season and won the tournament early with 3 games to spare. Real Madrid were not without silverware though as they won the Champions League for a third time in a row.

Levante (15th), Girona (10th) and Getafe (8th) were all able to retain their La Liga spots after having been promoted from the Segunda Division at the start of the 2017-18 season while Deportivo La Coruña (18th), Las Palmas (19th), and Málaga (20th) were relegated.

Rayo Vallecano and S.D. Huesca are this seasons automatic promotees after finishing 1st and 2nd in La Liga 2’s 2017-18 season while RealValladolid takes up the last spot after winning the promotional playoffs.

While it won’t be the first time these two teams face each other, it will be their first in top division Spanish soccer. The two clubs last faced each other in the SegundaDivision during the 2016-17 season and got even results. Valladolid winning 2-1 on their first encounter then 2-1 for Girona on their second.

Debuting last season, It will be Girona’s 2nd in La Liga while Valladolid are returning to La Liga after 4 seasons since their relegation at the end of 2013-14.

Real Betis are the favorites to win as Levante have been unable to beat them in their previous 8 encounters since the 2012-13 La Liga season. Betis has won 6 in their last 8 meetings while Levante managed 2 draws against them. Levante hasn’t kept a clean sheet in their last 5 games against Betis.

Levante’s last win against Betis was during the 2011-12 La Liga season where they won both their matches against Betis.

14th place DeportivoAlavés are going against the defending champions for their first game.

The good news for Alavés supporters: Barcelona are not impossible to take down. Alavés won 2-1 against the Catalan giants in the 2016-17 season. However, Barcelona retaliated with an emphatic 6-0 win on the 2nd leg.

This will be their first meeting in close to a decade since their matches in La Liga 2 during the 08-09 season. Their results then should hardly have any bearing now, but just for fun, Huesca won 2-0 then Eibar 2-0.

Rayo Vallecano are back in La Liga after they got relegated by the end of 2015-16.  In that season, Sevilla won the first leg at 3-2 then a draw at 2-2 on the rematch. Let’s hope we see as much goals in their matches this season.

Real Madrid has won all 6 matches against Getafe in the last 3 La Liga seasons. The good news for Getafe fans however is that Madrid has been unable to keep clean sheets in their last 5 games. Getafe has been getting 1 goal in every match for the past 2 seasons.

A draw has been the best result for Valencia against Atletico in the past 3 seasons. Atletico also kept clean sheets in all 4 games in the past 2 seasons.

This will only be the 3rd season that where these 2 teams will face each other. And it’s only in LaLiga where their paths cross. They’ve only faced each other four times before,  Blibao winning 1, Leganes winning 1, and 2 draws between them.

There you have it folks: A primer for Matchday 1. Hope these help you with your betting decisions! Good luck!

After the Novak (or Novax?) Djokovic visa saga dominated pre-tournament headlines, we can finally look forward to some on-court headlines as the Australian Open gets underway. Djokovic news has taken the focus off of the tournament, which is certainly understandable. After all, the fate of the world number one and top seed would significantly impact END_OF_DOCUMENT_TOKEN_TO_BE_REPLACED