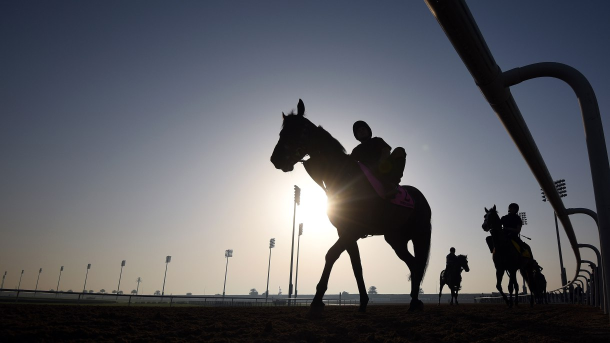 It is going to be a blazing pace in the 9th race of Belmont Park, the Grade 3 stakes sprint for three years old fillies.

Most horses are more comfortable going for the lead with early speed so there should be some fireworks in the first few furlongs.

Interestingly for a sprint course, the 6 and a half furlong dirt track of Belmont Park usually gives some advantage to horses coming from the outside positions.

Maybe a speedster can take them all the way but the pace handicapping logic says that a horse stalking the pace might have a better shot today. A longshot flying past everyone in the stretch is a distinct possibility.

The big question will be whether the likely favorite MIA MISCHIEF is coming back from her long winter break in form. If she is sharp, she will be hard to beat.

Number 1, COSITA MIA won her first start on this exact distance at Belmont Park one month ago, pressing the pace, which might be the right strategy here today. It was a good maiden win, around the top of the available maiden races so it looks like COSITA MIA has some qualities. The earned was not particularly impressive however and it would be good to see her performance at the before seeing her run at the Graded stakes level… It is a big gamble by her trainer and a big gamble for her backers today, but the longshot odds might make it worthwhile.

Number 2 D J’s FAVORITE is one of the horses likely to make the pace hot today, though she has also been seen coming in the stretch after pressing the pace. We have seen a bit of D J’s FAVORITE at the allowance level and her stuff is not bad but would not be enough for today. She takes off the blinkers so we can expect a more patient race that can pay off but class-wise, it looks difficult. Not impossible at the bottom of the exotic bets though.

Number 3, SEPARATIONOFPOWERS has won and placed in Grade 1 races last year, at 2-years-old, but was rested the whole winter and spring, and comes back after a long layoff. She has a few good workouts and her trainer knows how to get them ready for a big comeback. If she is back in form, she is for sure a big threat at this lower class level but one can wonder why she was stopped so long and if she is now sharp. I think that she will be overbet by the public and with a question mark on the form, I will probably just watch SEPARATIONOFPOWERS run this time.

Number 4, SOWER has so far followed a pretty classic class progression, Maiden win on first try, an optional claimer (I would have preferred allowance) and a decisive ungraded stakes win.

Today she tries the Grade 3 stakes. It is all very logical. SOWER is one of the many speed horses in it today and even though she has shown grit and ability to withstand pressure maybe today will be too much and the extra half a mile to run might be what seals her fate. At the likely low starting odds, I think it is better to pass on her today.

Number 5 MIA MISCHIEF comes down one class notch after winning a Grade 2 stakes at Churchill Downs a couple of months ago. It was a wire to wire victory but MIA MISCHIEF has also won pressing the pace a bit so maybe she can adapt if the pace is too hot. The class level is undeniable and she has won at the distance so the main question is whether her jockey can navigate the pace. For a win bet, the morning line odds are going to be pretty low in my opinion but she for sure needs to be in your exotic bets.

Number 6, DIXIE SERENADE comes from off the pace in every win and today she should be favored by the blazing early fractions expected. She is however well below class wise having never won above the allowance levels. It was not a bad race last out having to swing 5 wide In the turn but I doubt that DIXIE SERENADE has a good shot at a win today. If enough speed horses tire, she can grab a place however.

Number 7, TAKE CHARGE PAULA suffered a bad loss last time out with little excuse. She likes to stay close to the pace or on the lead but today she does not have the pace required I believe. I think that TAKE CHARGE PAULA does not have a great chance despite having places at the class levels above. Hopefully that attracts a few bettors because I will be staying away from her and I would like the odds of other horses to go up.

Number 8, SPECTATOR has been rested for a while and switches trainers after a good showing in a few Graded stakes of the higher echelons in Southern California. She has a few good workouts so maybe she has adapted to the weather of New York well. She won twice at the distance and has a versatile style that would allow her to be patient here. SPECTATOR has a good class profile and pace profile and I like her chances at the 5-1 odds level.

Number 9, DEVINE MISCHIEF was beaten by Sower in her only stakes attempt and she likes to grab the lead, which will be difficult today against better speed horses. I am not liking her chances today based on pace and likely class, though she comes from a good family and was an expensive purchase for her connections. I don’t think that she has a good chance today against this field and pace scenario.

Number 10, CLASSY ACT is another one of the speed horses who should burn the Belmont Park track in the early goings. She placed and figured ok in a couple of higher Grade races but with the pace scenario today and the fact that she is more of a route horse, I think that it will be a tough day for CLASSY ACT and the odds are likely to be relatively low too.

Number 11, NORMA’S CHARM come from behind style is a plus today but it is hard to back a filly who needed 11 races to break her Maiden. She did not impress a lot after that “performance” and should just be no factor today.

MIA MISCHIEF is a notch above all in terms of class and quality but it was a very long layoff so one can wonder if she will be a bit rusty. Her trainer knows how to sharpen them though so there is no denying that MIA MISCHIEF is likely the one to beat but I think the odds will be too low to bet on it.

I will prefer SPECTATOR who seems ready to take advantage of the pace scenario and should go off at interesting odds.