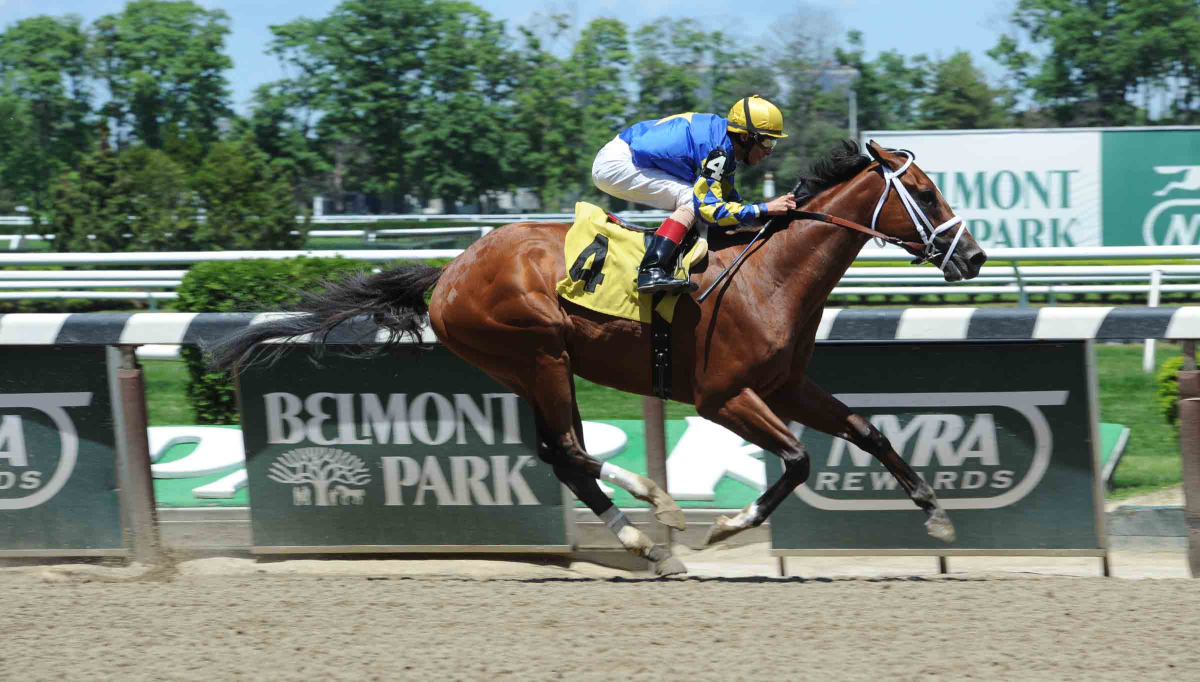 It is the last day of the season at Belmont Park before the New York horse racing circuit moves north for the start of the Saratoga 2018 meet.

As a parting gift the Belmont Park organizers have offered a stakes race for 2 years-old fillies where savvy handicappers will be able to use their pedigree handicapping skills as well as trainer angles.

Two proven winners (on first try) are coming in today with 4 who failed in their first race and three first time starters.

Luck will be a factor of course, with so many unknown horses and of course still developing ones. But using sound pedigree and trainer analysis, as well as logic, it is possible to trim down the field and place interesting and potentially lucrative bets.

Number 1, MIDNITESALRIGHT makes her second start after losing her first attempt in a relatively low class race. She was parked outside for the whole trip which is difficult at Monmouth Park so there is a little bit of an excuse. Her trainer has more success on second attempts and he puts blinkers on her so she should have some more early speed. She broke very well the last time which is great to see for a young horse. Her sire does not have the best stats for young dirt sprint racers but it is decent. The Dam is unproven so we can’t assess class very well with MIDNITESALRIGHT pedigree. There are some positive signs but she is facing a tougher opposition than the last time so she won’t be my top choice today but has her place on the exotic bets tickets.

Number 2 ICY LADY is one of the two who won a race on first asking. In it, she showed that she can break alertly, that she can come back decisively from behind and that she can be pushed by the jockey without rebelling. This is all good to see in a young horse. The win was not at a very high class level and was in a short field so maybe it was not a very difficult test. The fact that she won with a very bad speed figure for that class level is not encouraging either. Her trainer wins a lot more on first try than second so maybe she gave it all last out? ICY LADY ran merely 9 days ago so either she is still very sharp or she will be a little tired from the last effort. Even if she is still sharp, I am not sure that she has the class level for this one so I will pass.

Number 3, MAIDEN BEAUTY will make her first start in this stakes race. She is out of an uproven sire and an unproven dam so unfortunately there is not a lot to work with here and that’s not a very good sign. MAIDEN BEAUTY’s trainer is not known to strike with first time starters and the workouts are not so impressive either. A lot of questions to answer today for MAIDEN BEAUTY…It is better to watch her run than bet on her I believe.

Number 5 NATIVE DAWN won her first start in a Maiden Special Weight race here at Belmont Park. She came from behind to win decisively, however she did it in a pretty bad time and the speed figure is well under par for that class category… She beat a couple of her opponents of today in that one but may have been helped by the Belmont Park track bias. NATIVE DAWN’s sire has pretty good stats with young horses and the dam had a short but pretty good career. But for some reason NATIVE DAWN was sold cheap last year for less than her siring cost so that’s not a sign of massive confidence in her future or bloodline… Her trainer knows how to keep young winners ready to fire for a second time so she might have a good shot today against this field but I think that the odds will be too low to bet on that.

Number 6, PRINCESS PINKY raced last time out with her two gate neighbours of today. She battled for the lead for a while before being overtaken near the top of the stretch by Native Dawn, the eventual winner. There were some things to like, including the early speed, and this trainer’s runners do much better on second asking than on the first start. Still, the loss last time was not impressive and the workouts since are not very good either… At the right price why not but the probabilities are not immense in my opinion.

Number 7, SHE’S TROUBLE had a ton of trouble coming out of the gate and was 14 lengths behind the leaders at the first call in her last race. She made up the ground though and was able to claim third. If this time she can actually get out of the gate ok, maybe she will have a good shot. This trainer’s horses win about twice as much on second try compared with the first so maybe she has learned a bit from the first race and will be much improved. SHE’S TROUBLE comes from a pretty good family so she might progress a ton in the future. If the odds are high enough, it might be a good idea to give her another chance.

Number 8, TOSSUP makes her first start after an OK series of workouts, nothing too good, nothing too bad… She is an expensively bred filly who was also expensively bought last year. She will have to do better than her siblings to earn back that sale price however. So far her dam has not produced very classy foals… As class is said to come from the Dam’s side, that’s not very encouraging. Her trainer prepares her horses very well for a win on first try so TOSSUP should be a danger today, but I fear that her odds will be quite low, and the class and workout factors will turn me away from her.

Number 9, POSITIVELY JEAN won at Belmont Park two weeks ago but on the turf, going wire to wire in a pretty weak pace. She was certainly helped by the track bias and pace factor on the inner turf but still, she broke and accelerated well and seemed to accept her jockey’s order well. The win was slower than par for that class level but still in range so that was a positive effort for sure. Her dam had a handful of foals who did pretty well at the races and the sire is not bad either. POSITIVELY JEAN is not necessarily bred for turf so maybe she can do as well on the dirt. She has shown that she has early speed and starting from the outside today should benefit her as there is a bit of track bias at Belmont Park. I think that POSITIVELY JEAN will repeat her performance and win again, hopefully at decent odds.

As with most races for 2 years old horses, a lot of guesswork is necessary and even more so in a stake race.

On paper, most horses have a chance and I think that it will be interesting to bet mostly on boxed exotic bets with the best choices. In an open race like this one, this should create pretty interesting payouts while maximizing the chance for a score.

Usually, horses with some racing experience do better than first timer so there are good reason to favor a proven winner in this one to finish on top, but not at any price.

I believe that POSITIVELY JEAN is best on paper and once again will be in the right spot to benefit from Belmont Park’s track bias. She did well last out and I think she can repeat on the dirt.

MIDNIGHTSALRIGHT has some excuses for the loss last time and makes some equipment changes which can make a world of difference. She most likely will be a threat today.

SHESTROUBLE just did not start right last out and that’s a bit of a concern because schooling is a primary factor of success for young horses. If she learned from that mistake she will be a threat though, so I think she needs to be considered today.