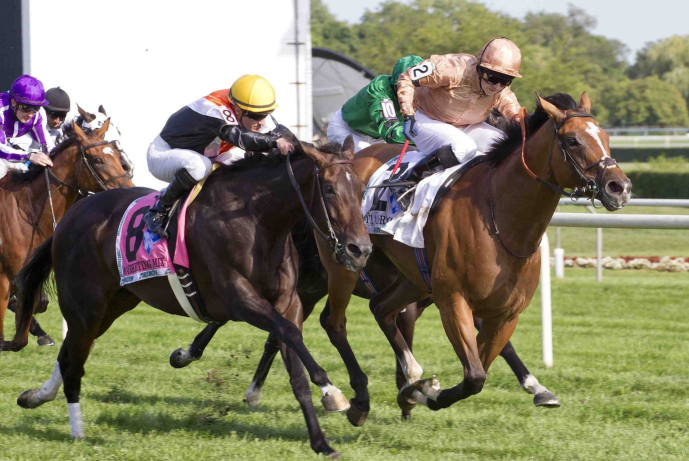 October weather is not the most pleasant in New York and in the last couple of days the turf races have all been scratched. The rain is not supposed to be too bad today but we will have to wait and see if this Floral Park Stakes sprint is indeed run on the turf.

The below analysis and picks are based on the assumption that the race will indeed go on the turf. If it does, we can expect a relatively heavy ground so horses with some experience in the wet should be favored.

This is a sprint on the inner turf course of Belmont Park so starting on the inside with speed should be beneficial but recent races of this kind at Belmont Park have all been won from behind. In today’s race, there are multiple horses with early speed starting from the middle or the outside and I therefore expect a hard battle to the first turn that might setup a horse saving ground just behind.

There is a lot of movement up and down in class for this one and that makes this race interesting. One of the key contenders, based on the class, should actually have a pretty poor trip while the other should have a good one.

On the other hand, some relatively unproven horses at this class level might be advantaged by the pace and post position and could spice up the exotic bets…

Analysis and picks for the 8th race at Belmont Park on October 13 2018:

Number 1, ROCKY POLICY has a few podiums at this class level on her resume and comes off two pretty good races. She took part in a similar race last month at Laurel Park, on a yielding ground, and was beaten by a few of today’s opponent in that race but she had to run on the far outside all the way and yet finished pretty well. In today’s race, ROCKY POLICY will be saving ground on the tight turns of the Belmont Park inner turd so if she can find an opening in the stretch, she could grab a podium at interesting odds. (UPDATE: this horse has been scratched)

Number 2 JC’S SHOOTING STAR has never done well in Stakes races, even those reserved for State-Breds so today’s class should be difficult for her. JC’S SHOOTING STAR was rested for longer than usual after two very disappointing races and that’s not necessarily a great sign. Working for her is the fact that JC’S SHOOTING STAR is very comfortable on the Belmont Park track and draws a very good post position in this large field but based on class it looks difficult.

Number 3, LADY ALEXANDRA is the favorite in this race on the back of multiple wins on this very track, some of them at this class level. LADY ALEXANDRA is also coming way down in class for this one having almost won a Grade 1 this summer and but disappointed mightily last month in a Grade 2, on another surface though. There is an ocean between today’s class levels and these recent races so based on class, LADY ALEXANDRA should have an easy time today and we know she is comfortable on the Belmont Track. She should be able to save ground just behind the leaders and strike late so we can expect her in the mix at the finish line. (UPDATE: this horse has been scratched)

Number 4, ANNIE ROCKS has not done better than 3rd this year despite running in much lower class. She does very well on the wet tracks but that’s about the only positive in her resume for today’s race. It is unlikely that ANNIE ROCKS does much today. (UPDATE: this horse has been scratched)

Number 5 FIRE KEY won her last race, at this distance and in this class category, last month and it was on a wet track to boot so a lot of positive there. In that race, FIRE KEY ran on the inside of Fear No Evil and was able to save some ground and yet barely beat Fear No Evil so there is a question mark on her strength meeting her again. Today, FIRE KEY might be able to once again settle with a ground saving trip to strike late and her hot jockey should know when to strike. In terms of class, FIRE KEY is a few notches below the favorite but she has done well at this class category, on this track and on a wet track so we will probably see FIRE KEY battle for the win in this one.

Number 6, TILLIE’S LILY was unbeaten up until her last race when she did not start well and blew her chances. It was her first try at the class level so maybe it was a factor and since she has been working out like crazy. TILLIE’S LILY is a one speed horse and she might very well be able to grab the lead, but today’s cost might be more than she can bear as there is quite a bit of competition to the first turn. I think that like the horse speed horses today. TILLIE’S LILY will be overtaken in the stretch.

Number 7, ORECHIETTE is a barn neighbour to her starting gate neighbour and she is also a speedy horse likely to compete hard to the first turn. Just like her neighbour, ORECHIETTE has been doing very well on this track but today is a higher class level than what she is really used to and I expect ORECHIETTE to be beat in the stretch by come-from-behind horses.

Number 8, BATTLE JOINED is yet another speedy horse starting from the middle but with a worst resume than the two on her inside. She did not do much in her only race at this class level despite a good post position so I don’t expect to surprise today.

Number 9, ALWAYS THINKING has not won in over a year, competing at this class level, and did not even grab a podium… In Her last outing, ALWAYS THINKING was able to save a bit of ground and had some traffic trouble in the stretch but he did not gain much ground when the line opened so I am not sure that she had a lot more to offer. ALWAYS THINKING will probably be out of the places again. (UPDATE: this horse has been scratched)

Number 10, LULL is the second favorite on the morning line odds and the main reason is of course her decent performances recently in higher class races. LULL is coming down to the ungraded stakes level after a series of places and a few wins in graded company. Of note, LULL is also coming down in terms of distance and she has actually been running mostly on longer. She works for a great turf trainer but the distance change worries me and especially given that LULL usually tries to stay close to the lead and here, it will mean being parked outside. Based on class, LULL fits perfectly but the pace and trip might be her demise and the workouts don’t indicate great fitness either. (UPDATE: this horse has been scratched)

Number 11, FEAR NO EVIL barely missed for the win at this class category last month and had to travel wide all the way in that one so there was some excuse. Unfortunately for FEAR NO EVIL, it looks like once again she will have to be parked outside and with more horses in the race, it might be even worse today. Still, FEAR NO EVIL impressed me in her last race and her recent workout is great (for her) so she is probably fit for this one. With a bit of luck in her travelling, FEAR NO EVIL has her place on the podium.

Number 12, BLACK CANARY tends to go for the lead and starting from the outside on the inner turf course of Belmont Park will not be great for that… Add to that the fact that BLACK CANARY is going up in class against some who are going down and you have a recipe for a bad day.

Number 13, YORKIEPOO PRINCESS is entered only for the main track and should be scratched

Number 14, POSSE NEEDED is entered only for the main track and should be scratched

The morning line favorite is well positioned in the starting gate and has the right pace profile to win this one I think. LADY ALEXANDRA deserves low odds but this is a big field and she might encounter some traffic trouble. If not, her class and late speed should allow her to prevail.

Also going to be well positioned to strike late is FIRE KEY. She should be right there near the finish line but has a class disadvantage. The higher starting odds might make her more interesting to bet on than the favorite however.

A couple of longer odds horses have a decent chance at a place I believe and should be added to the exotic bets.

ROCKY POLICY will be able to save ground on the turn this time and if she can find the opening in the stretch, she has the last speed to get on the podium.

FEAR NO EVIL appears to be fit and if she can sneak on the inside to save a bit of ground, she can grab a place too.

UPDATED PICKS: the number 3 and the number 1 have unfortunately been scratched. It should not impact the chances of my other two choices and therefore the Exacta pick 5-11 is still valid. A Win bet on number 5 makes sense too.