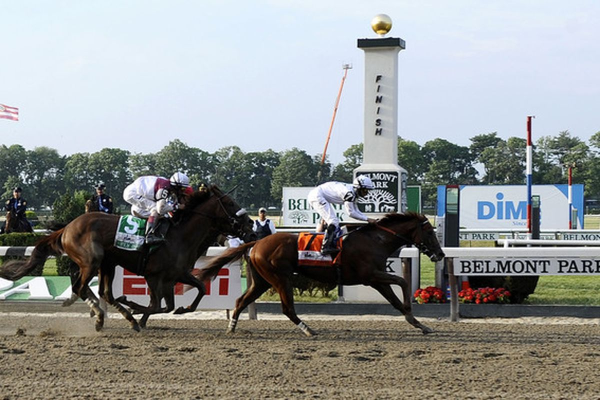 July 7 is going to be one of the best racing days of the year at Belmont Park with 5 nice Graded Stakes races on the card, all of them part of the Pick 6.

The stakes start in the 6th race with the Dwyer Grade 3 route, a race for 3 years olds.

This should be very interesting as a bunch of Kentucky Derby participants are trying their luck here today but not all seem to be in form.

For two of the seven horses, the Kentucky Derby was actually their last race, so they have had plenty of time to recuperate… Are they coming back sharp?

Will one of the classy Kentucky Derby horses prevail today or can a relative newcomer surprise?

The race is pretty open with some classy horses and quality ones making a jump up.

Number 1, SEAHENGE has lived a life of travels recently, trying his luck in good stakes races in Great Britain, Ireland, the Arab Emirates and most recently at Churchill Downs where he competed on the Kentucky Derby day undercard mile G3. SEAHENGE did not impress much as of late and his race on May 5th at today’s same class level was underwhelming. I don’t think we can excuse the sloppy track, considering that he comes from the UK and the Turf racing world where deep tracks are the norm… SEAHENGE carries a lot less weight than most competitors but I don’t think that it will help enough. His slow starting traits should also do him a disservice at Belmont Park which tends to favor horses close to the lead, even at route distance. There are no published workouts since the May 5th race so the form is doubtful too. SEAHENGE is outclassed, never won at the distance and might be in poor form so I will pass today.

Number 2 SEVEN TRUMPETS comes back up to the Grade 3 stakes level where he has never had much success. His three Graded Stakes attempts have been on slightly longer routes and in those, he lost steam at the end. Maybe cutting back today to 1 mile will help him a bit? SEVEN TRUMPETS comes out of a decent win but the speed figure earned is not close to the par level needed to have a realistic shot today. SEVEN TRUMPETS has early speed which will be an advantage as many of his opponents today are the patient kind. The two bullet workouts in the last two weeks are solid and it looks like SEVEN TRUMPETS is hot. He has an ok chance but class wise and based on the speed figures, it is more of an outside chance… Still if his price hits the 12-1 mark, why not?

Number 3, RUGBY MAN is a lightly raced 3 years old who makes the jump to Graded Stakes for the first time. He broke his maiden impressively after moving to Belmont Park and finished a close second in an ungraded stakes last time out on today’s track too. It looks like he likes the New York surroundings. He puts the blinkers on today so he might be going with more early speed which can pay off nicely at this track. This is a step up in class though, so that might be a hard race for RUGBY MAN. But multiple signals are green, including the hot jockey and trainer combo so far this season. I think he has a chance but I will need some pretty high odds to bet on it.

Number 4, NOBLE INDY is one of the contenders who comes to us from the Triple Crown races. He tried his luck in both the Kentucky Derby and the Belmont Stakes, not doing so well both times. Those are the very top of the class system though and NOBLE INDY has demonstrated that he can win at Grade 2 level. Today’s race is therefore a step down and he probably has more than enough class for today’s class, a Grade 3. He is cutting back in distances too which might suit him a bit better and his quick early pace should be a plus at Belmont Park. Noble Indy is for sure a major threat today but not a given so I would not accept anything less than 3-2 on him.

Number 5 FIXEDINCOME LARRY is making a big class step up today, coming straight from his maiden win. It took him a while to find his winning race but it happened right here at Belmont Park so there is a plus. It is a very steep class climb for him today, notwithstanding the need to go further than he has ever run… FIXEDINCOME LARRY can probably be disregarded and with his come from behind style, I don’t believe he will be a factor at any point in the race.

Number 6, MENDELSSOHN is one of the two horses coming to us straight from the Kentucky Derby, two months ago. He was not really a factor in the race and finished 73 lengths behind our triple crown winner, Justify… Before that catastrophic Kentucky Derby, MENDELSSOHN did actually well on the international circuit, winning a Group 1 Turf race at Del Mar last year and winning the UAE Derby Group 2 in Dubai in March. MENDELSSOHN does have class but he has been a bit inconsistent and with no published workouts since the Derby, the form is a question mark. He has a suitable running style for Belmont Park as he can take the lead or stay close to it. But with a few question marks and likely low starting odds, I will prefer others here unless his odds go over 5-1 which is unlikely.

Number 7, FIRENZE FIRE comes straight from the Kentucky Derby too but does publish some tepid workouts since then. The workouts were probably just a way for his good trainer to keep him in shape though (the trainer hits 47% so far this season…). If we assume that FIRENZE FIRE is ready to go, the question is: does he have what it takes? He did win at this distance at Belmont Park last year in the Champagne Stakes, one of the best Grade 1 races for 2-years-old. He won and placed in Grade 3s before and it was not a bad showing 3 months ago in the Wood Memorial G2 right here in New York. So, class wise, he probably has the goods for a G3 today. But his last win was at the start of the year and it looks like FIRENZE FIRE is struggling a bit at three years old. His come from behind style should not be very useful today as I don’t think we will see a crazy hot pace. FIRENZE FIRE must have his place in a G3 but I don’t think that today will be the day and unless his odds go above 7-1 I don’t think he will be a good bet today.

We have multiple quality horses taking a step back class wise and it means that the race should be interesting.

The Kentucky Derby losers are uneven in my opinion and I believe that NOBLE INDY will be a step above his past competition again today.

If a horse like SEVENTRUMPETS can grab the lead and go unchallenged he can maybe score the upset but that’s not very likely.

RUGBYMAN is another who could try to steal the race, working for a blazing hot trainer and putting on the blinkers for the first time. But at the morning line odds of 2-1 I would not touch him.

When you consider all together, the most likely winner is NOBLE INDY.

I hope that the betting public will be disappointed in his last two speed figures and prefer others to bump NOBLE INDY’s odds a bit higher.

WINBET at 2-1 or more on Number 4 NOBLE INDY

And if you want to go for the home run, take WIN on SEVENTRUMPETS if he goes off at 12-1 or more.