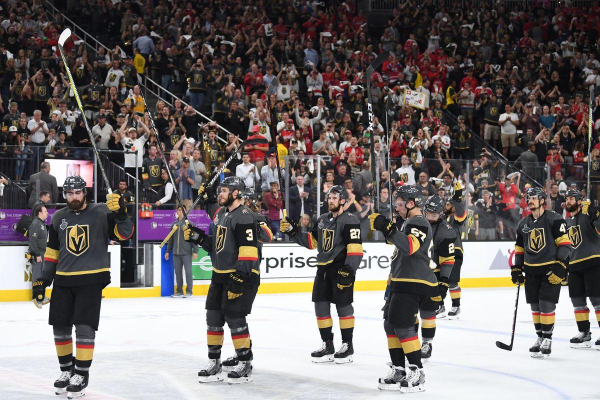 The Vegas Golden Knights, last year’s Cinderella story, are back and even stronger than last year. After dropping Game 1, Vegas has won three straight games and is on the verge of advancing to the second round of the Stanley Cup Playoffs.

Now with the series returning to San Jose for Game 5, the Sharks are on the brink of elimination. Since winning Game 1, San Jose has dropped three in a row by a combined score of 16-6. It will take a big effort from the Sharks to extend the series.

Here’s a brief recap of Game 4, some keys to tonight’s game, as well as a prediction.

It was all B from the start on Tuesday, From Max Pacioretty’s goal in the first 80 seconds of the game, to Jonathan Marchessault’s power play tally in the third period, the Knights dominated the Sharks en route to a 5-0 win. Vegas got another goal from Pacioretty, as well as scores from SheaTheodore and Alex Tuch, each of their firsts for the series.

The biggest difference between these clubs was in net. Marc-Andre Fleury stopped all 28 shots fired in his direction, earning his 15th career playoff shutout. Meanwhile, MartinJones faced only seven shots and allowed two goals, before AaronDell came in and recorded 17 saves on 20 shots.

Three players who were not a part of Vegas‘ roster last season are having a monster postseason thus far. Deadline acquisition Mark Stone leads the entire playoffs with six goals and ten points. Max Pacioretty has four goals and ten points as well, and PaulStastny rounds out the top-three playoff scorers with two goals and eight points. Their continued production has been the difference in this series.

If there’s an area to improve tonight for Vegas, it’s their first line of William Karlsson, Jonathan Marchessault, and Reilly Smith. That trio, who finished 1-2-3 on the team in regular-season scoring, have just six points combined in the four games. Having Stone and company alleviating the pressure is good, but Vegas will eventually need this trio to find the same momentum they had during last year’s Cup run.

Despite being the second-highest scoring team in the league this year, SanJose has put up a measly six goals in their last three games, the latest game being a shutout. A big reason for that is attributed to slow starts that allow the Knights to grab the momentum and run with it. In each of the last three games, the Knights have jumped out to a 1-0 lead less than two minutes into the game. San Jose needs to flip the script and come out hot, just like they did in Game 1.

This key is obvious, but it may be the hardest fix. MartinJones simply needs to be better if San Jose is going to win this series. Including his latest poor performance where he couldn’t make it out of the opening period, Jones is last in the NHL this postseason with a 5.33 goals-against average and .838 save percentage. Jones has to flip the switch and match Fleury save-for-save, otherwise, it is going to be another long night for the Sharks.

San Jose should get some help with the return of center Joe Thornton from a one-game suspension. Defenseman Marc-Edouard Vlasic, who has been out since suffering an injury in Game 2, also returned to practice on Wednesday and is a possibility to play tonight. However, the Knights have looked completely dominant in this series, and unless Jones drastically improves, I’m picking Vegas +105 to finish off the Sharks and advance to the next round.