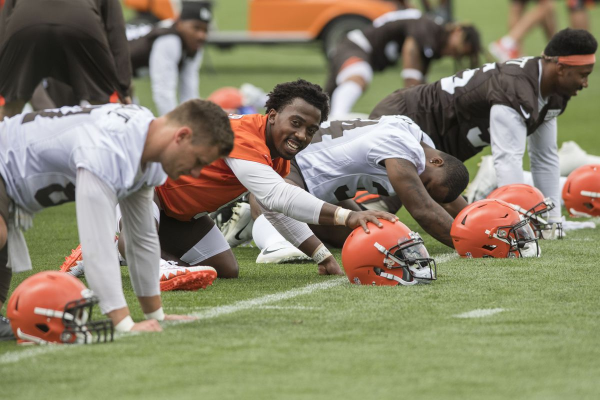 It has been a while since the Cleveland Browns won a game, like a long while. In fact, the last time they won was December 24, 2016. After going 0-16 last year, you wouldn’t think an 0-1-1 start would inspire confidence, but it has in the Browns. It wasn’t that they tied in their first game or lost by 3 in their second, it was whom the opponents were that inspires confidence.

In week one, they tied the Pittsburgh Steelers 21-21 and then lost by only 3 points last week (21-18) to the New Orleans Saints. Even more inspiring, they had chances to win both games, if it wasn’t for the difficulties of their kicker. Now, with an improved roster a little confidence, they are actually favorites in Thursday night’s game with the Jets.

For the Jets, they are 1-1 after a 48-17 throttling of the Detroit Lions in week one and a 20-12 loss to the Miami Dolphins in week two. The schedule makers were not kind to the Jets, though, as this will be their third game in 11 days. They played the Monday night game in week one, followed by Sunday in week two and now Thursday in week three.

For any NFL team, that can be both brutal and exhausting, but coach Todd Bowles won’t look at is as an excuse. The Jets hope to go in an take one in Cleveland and if they do, they will have already surpassed the number of victories on the road than they had last year.

The two will meet up Thursdaynight when the Jets travel to FirstEnergyStadium to take on the Browns. Kickoff is scheduled for 8:20 pm ET. The spread comes in with the Cleveland Browns as 3-point favorites in this one. The over/under on total points scored comes in at 39.

Jets Look To Improve To 2-1

Just looking at the early parts of the schedule, the Jets would really like to secure this victory, mostly because they then have the daunting task of taking on the Jacksonville Jaguars in week 4. Going into week four already 2-1 would make the game seem a lot less desperate than if they were 1-2.

The offensive reigns have been handed to rookie quarterback, Sam Darnold.Darnold is 41 for 62 (66.13 completion percentage), with 3 touchdowns and 3 interceptions. Quincy Enunwa has been Darnold’s most reliable receiver with 13 receptions, 155 yards and 1 touchdown. On the ground, Isaiah Crowell and Bilal Powell have gotten the majority of the touches to date.

Crowell has 22 carries for 137 yards and 2 touchdowns while Powell has 17 carries for 66 yards. With a tenacious Browns’ defense and defensive coach GreggWilliams, it is very likely that Darnold will feel a little pressure Thursday night. The question is how will he respond to it.

Can Browns Finally Get a Win?

Hue Jackson’s record is not exactly inspiring as head coach of the Cleveland Browns. At 1-32-1, the Browns have been the laughingstock of the NFL for a couple years now. There are signs that is starting to change, though. The Browns defense is actually beginning to be pretty formidable, especially with budding star MylesGarrett leading the way. Between Garrett and Larry Ogunjobi, they have already combined for 5 sacks and there is speed and pressure all over the field on the defensive side.

Rookie Denzel Ward has 2 interceptions and Terrance Mitchell leads the team with 11 tackles. With a Jets defense that is not overly intimidating, the Browns may be able to take it right at rookie Sam Darnold.

On offense, the Browns did lose a weapon earlier this week. They traded wide receiver Josh Gordon to the New England Patriots. While there is no doubting Gordon’s talent, his off-field issues became a constant headache and the Browns are hoping it is addition by subtraction. Still, quarterback TyrodTaylor has options around him in running back Carlos Hyde (38 rushes, 105 yards, 2 touchdowns), Jarvis Landry (12 receptions for 175 yards), and Antonio Callaway (3 receptions, 81 yards and a touchdown).

Browns Finally Get A Win

It has been a long time coming, but I think this is finally the week the Browns get a tally in the win column. Showing promise in the first two weeks against teams that, at least on paper, seem much better than the Jets, the Browns have taken it down to the wire. This week, it will finally translate to a win. I think it is a defensive game (so taking the under may not be a bad play), but ultimately I think the Browns win it by a touchdown and cover the spread. Take the Browns -3.