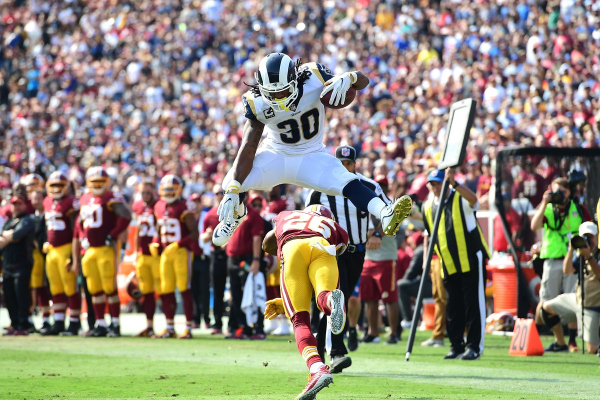 For two teams that were considered favorites in their respective divisions prior to the start of the season, only one of the Minnesota Vikings and L.A. Rams has looked like a contender, while three games in, the other has looked like a pretender. The Rams (3-0) have looked like the most dominant team in the NFL. Their scoring differential is 102 to 36, including a 35-23 win over the Los Angeles Chargers last week. For the Vikings (1-1-1), consistency has been a struggle over the first three weeks.

In week one they had a good win over the 49ers (24-16). In week 2, they struggled with their kicker, blowing a chance to beat the division rival Packers (ending in a tie) and in week 3, they were blown out by what seemed like a very weak Buffalo Bills team. Fast forward to this week, when the Vikings travel to Los Angeles Memorial Coliseum to take on the Rams, and they are going to have to play much better on both sides of the ball to have a chance at winning.

The spread for this one comes in with the LA Rams being just slight 7-point favorites. The over/under for total points score is at 49.5.

Vikings Looking To Bounce Back After Tough Loss

On paper, the Vikings should be a really solid team. A playoff team from a year ago, the Vikings added Kirk Cousins to give stability and veteran leadership at the quarterback position. Thus far, Cousins is 95 for 139 (68.35 completion percentage) with 7 touchdowns and 2 interceptions. He has developed an especially strong rapport with wide receiver Adam Thielen. Through three games, Thielen has 32 catches for 338 yards and a touchdown. The next highest reception total is Stefon Diggs, who has 16 catches for 188 yards, but also has 3 touchdowns.

One problem that Vikings have had is in the running game. Dalvin Cook is their leading rusher with only 78 yards in two games (he didn’t play last week). Backup LataviusMurray has just 17 carries for 62 yards. Neither one of them has a touchdown run to date this season. If they want to establish any sort of consistency in their offense, the running game is going to have to get going.

While they aren’t getting much going in the run game, opponents are against the Vikings defense. They have allowed 316 yards on the ground. In fact the Bills, without LeSeanMcCoy, had 128 rushing yards. With Todd Gurley coming to town, Vikings fans have to be concerned.

On the ground, Gurley leads the way with 62 rushes for 255 yards and 4 touchdowns. Malcolm Brown has added 18 rushes for 93 yards over the first three games. With such a balanced attack, they will be tough for any defense to match up with.

Defensively, they have been solid as well. They have given up 290 yards on the ground in three games and only 619 yards (average of about 206 per game). They have only given up 4 touchdowns and have 4 sacks on the season. While they gave up 23 points to an underrated Chargers team, they only allowed Philip Rivers to throw for 215 yards. With a suspect offensive line in Minnesota, they may have their way with the Vikings.

This is a tough one. On paper, the Vikings should be much better than they have played, but until they show any kind of consistency, it is hard to bet that they will be able to keep up with the surging Rams. A full touchdown spread is a lot, especially with two teams who were expected to excel this year, so I wouldn’t blame you if you wanted to take the Vikings and the points. For my money, though, I am going with the Rams until someone proves they can slow them down. Take the Rams giving up the 7 points.