The NFL Should Expand in Europe for Betting’s Sake 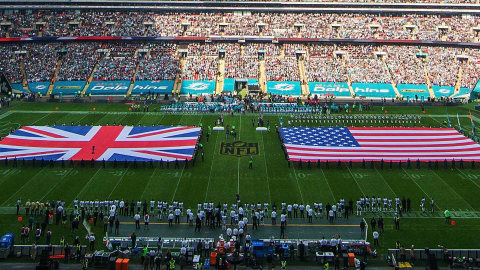 With the Philadelphia Eagles win over the Jacksonville Jaguars last week, the NFL London Series of games ended for this season. What was once an experiment many years ago has now become a staple of the annual schedule, with three games held in England this year.

This year, as in past years, the turnout has been a massive success, with all the games selling out with ease. This begs the questions from many: why not expand the series? There are arguments on both sides, but here are some thoughts we have as to why we think it is the obvious next move for the league.

The Betting Culture is Massive

As the European market gets comfortable with the rules of American Football, one thing will become clear to the NFL – there will be a lot of money gambled on the sport.

Now, the league doesn’t stand to profit directly from betting on its games, but as it is about to find out in the United States, when more eyeballs are on your product, you can charge more to advertisers – a lot more.

With the regulation of sports betting in the U.S., the European games will increase betting handle on both sides of the pond.

The games in London get their own stage in the American viewing market as they are on much earlier than the traditional starting times of other league games. This gives bettors more of a chance to focus on this game, which in turn should see an increase in in-play betting.

The league is popular across Europe

As part of the expansion we are proposing, we think the NFL should start to expand where the games are hosted.

While London was the obvious choice for a first foray into the EU, there are some other countries where there are a ton of ex-pats and a market looking for more forms of entertainment.

Cities like Paris, Rome and Frankfurt are all excellent sports cities with the population and facilities to host an NFL game, and this would draw attendees from other parts of Europe who may not want to fly to London to see a game. We think there could be at least one more London game as well as a couple of additional European games to start without saturating the market.

Go where the tickets are selling

Let’s face it: as popular as the NFL is in the United States, the number of people attending the games is shrinking in many cities.

This can be attributed to many things – everything from better coverage to the desire to watch more games at once for betting and fantasy purposes has had an impact on the attendance figures.

By sending some of the games overseas, the league introduces the product to rabid markets, and with a limited number of games to choose from, they are guaranteed to drive some significant revenues in whatever cities they choose.

Yes, this would impact season ticket holders of many teams, but the backlash is unlikely to be too strong as many of thee ticket holders are reselling games anyway these days.

Just say No to relocation or expansion

Now, even though we think the NFL should increase its presence in Europe, we are not suggesting that a team relocates (you’re welcome, Jacksonville) or that a new franchise is awarded to London.

First of all, in an attempt to grow the sport globally, the Europe games should be spread to multiple cities – having a full-time team would be counter-productive.

Also, sending different teams is more engaging from a betting perspective – if there is a full-time team then there is going to be less interest in the lines of games as there will be from having new teams in every week.

What will the NFL do?

While we think the league could take full advantage of their new European popularity, we suspect the NFL owners will trad lightly into this expansion. They have added Mexico into the mix, and perhaps will look at an Asian presence in the future.

However, we think the time is right for the league to expand their way across Europe, and gamblers on both sides of the ocean are looking forward to seeing what direction the league takes.