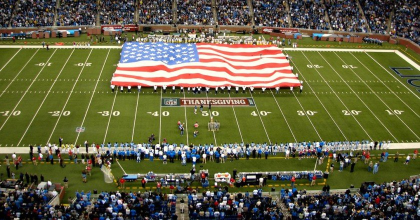 This is a great week for NFL fans, but especially for those who love to bet on the games, or play in Daily Fantasy contests. With three games on Thursday for Thanksgiving, there are multiple days of action to choose from, and this is music to gamblers’ ears.

However, this Thanksgiving week has already been tarnished a little by the result of this past Monday’s matchup between the Los Angeles Rams and the Kansas City Chiefs.

This instant classic was the third highest scoring game in the history of the league, and there is a lot to unpack from this game that affected gamblers more than those watching for the fun of it.

The game lived up to the hype from a fantasy perspective

This was billed as a marquee matchup and a potential Superbowl preview – a matchup of two 9-1 teams who are both juggernauts on offense. In fact, most fantasy team owners who drafted Jared Goff or Patrick Mahomes are getting far more than they could have ever expected. This game had a lot of hype leading up to it, which normally means we are going to be treated to a dud.

A staggering 14 touchdowns were recorded on Monday night in this 54-51 epic, including 4 by Goff and a whopping 6 by Mahomes. It was a tough week if you were up against a team featuring any of the Rams or the Chiefs – time to move on to next week.

However, this wasn’t just about the fantasy points from the offensive side of the ball. The Rams defense had a veritable field day, with three interceptions of Mahomes and two strip sacks of Mahomes both leading to defensive touchdowns.

When your fantasy defense scores more points than your running back, you know you are having a good week. The Chiefs’ defense also got on the board with some sacks and a fumble recovery for a TD of their own. All told, if you didn’t love fantasy football before, you sure love it now!

So, you may recall that this game was supposed to be played in Mexico City. Now, the official story is that the field was in terrible shape due to some concerts and soccer games recently on the pitch, and as a result, the game was moved to Los Angeles.

Let’s park the move for a second. The bigger story here is that excuse about the field. The NFL has played mud bowls, on sheets of ice, and in all sorts of different field conditions without any issues in the past.

One could wonder if the game was between the Titans and the Jags, would the field conditions been such an important issue? Moving the most anticipated game of the year back to the States was a smart decision for the league and for advertising purposes. Let’s just not get caught up in the whole “better for player safety” reasoning, ok?

Now, about moving the game to LA. The fact that California has taken yet another beating with the horrific wildfires, and the league was able to give away over 75,000 tickets to this game to first responders, families who lost their homes and those who are still missing loved ones cannot be overlooked. This was an incredible amount of goodwill, and the thankful fans showed their gratitude by being loud all night long.

You know who wasn’t thrilled? Sportsbooks. The Rams were a 2.5 point favorite when the game was being played in Mexico, but the line had to be moved when they were now playing at home, and it moved all the way up to 3.5 before settling back down at 3 on the nose. Well, this caused the majority of bets to be a push, and there was definitely more action on the Chiefs +3.5, so the books were not going to come away from this a winner.

Sports bettors, on the other hand, would have been absolutely thrilled to bet on the total score of this game. You will recall that the total posted for this game was a whopping 64.5, the highest total set for an NFL game in 30 years.

Well, bookmakers could have set the line at 90 points and still lost this one by a mile. Sometimes, there just isn’t a way to post a high enough line to get the action to even out. Luckily for sportsbooks in Nevada, it appears that only 70% of bettors took the over, which was eclipsed before the end of the 3rd quarter.

Early indications are that the books in Vegas took a seven-figure hit on the total bet, which could have been a lot worse.

Like it or not, this is the new NFL. With hard hits being penalized more than ever, and quarterbacks now completely untouchable, we are bound to see these wild fantasy and betting performances.

Time will tell if the league puts any measures in place to try to slow down these high-scoring affairs, but based on the TV ratings, and the handle coming from a newly-regulated sport betting market in the U.S., we think that results like this will occur more often in the coming years.

All bettors and DFS players have something more to be thankful for this holiday season.