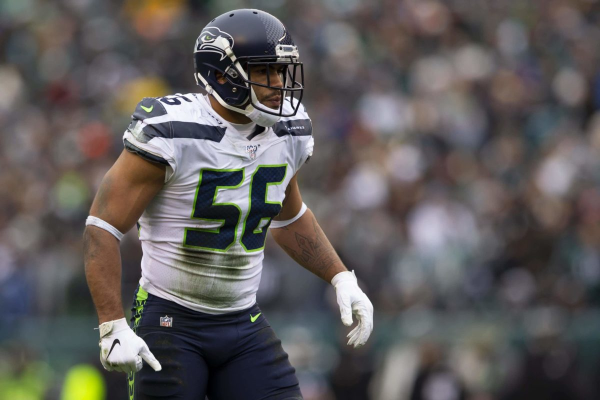 Of all the rosters remaining as we enter the NFL playoffs, Seattle’s is one that couldn’t afford another injury. Yet the Seahawks will head into the Wild Card round without starting linebacker Mychal Kendricks, who will miss the remainder of the season with a torn ACL.

Kendricks’ injury was suffered during Sunday night’s loss in a contest for the NFC West title when Seattle couldn’t rally back against San Francisco. Receiver Jaron Brown was also injured in Sunday’s game and is set to miss “a couple weeks,” according to coach Pete Carroll.

Kendricks now joins a relatively long list of players unavailable to the Seahawks as they get set to begin postseason play. While safety Quandre Diggs is a possibility to return for this weekend’s game in Philadelphia, Seattle will be without their top three running backs – Chris Carson, Rashaad Penny, and C.J. Prosise.

In his second straight year ended by a knee injury, Kendricks is a player the Seahawks will miss badly. In addition to his three sacks and one interception, Kendricks finished with the fourth-most tackles on the team (71).

With a roster depleted by injury, can Seattle go into Philadelphia and get a win?

Seattle’s matchup with San Francisco was vital for a number of reasons, not the least of which is the fact that the Seahawks finished second in the division and now have to go on the road to start the playoffs as the No. 5 seed.

Because the Eagles won the NFC East and earned the No. 4 seed, they’ll play host to Seattle this weekend.

So, who has the edge?

Under normal circumstances and on a neutral field, the 11-5 Seahawks would likely be heavily favored over the 9-7 Eagles. However, Seattle has been depleted by injury and has to go on the road.

On the bright side, Seattle is 7-1 away from home and still has the services of quarterback Russell Wilson, who has played at an MVP level for much of the year. Throughout the regular season, Wilson completed 66 percent of his passes while tossing 31 touchdowns and only five interceptions.

Seattle has also proven itself by beating the likes of San Francisco and Minnesota, not to mention a 17-9 win over Philadelphia earlier in the season. Meanwhile, the Eagles haven’t beaten a playoff team since Week 8.

And while the Seahawks have plenty of injury woes, Philadelphia has some injuries of its own. In addition to the receivers set to miss this Wild Card game, the Eagles may also be without tackle Lane Johnson, tight end Zach Ertz, and running back Miles Sanders.

In the end, the playoff experience and savvy of Wilson could be the difference against a team led by the inexperienced Carson Wentz.

The Seahawks were one win away from earning the NFC West crown and hosting a playoff game. The Eagles have recent playoff success and want to prove they aren’t the weakest division winner in years.

Both of these squads will feel they have a chance to make a deep postseason run, but only one will escape Sunday’s contest in Philly.

According to the odds, very little separates these two teams. Despite their injuries, Seattle is currently a 1.5-point favorite on the road against Philadelphia.

However, neither team will be satisfied with only winning a single playoff game before getting knocked out of contention. So, which team has the best chance of being crowned Super Bowl champions?

With the seventh-best odds of winning the Lombardi Trophy, the Seahawks (+2500) have a better shot than the Eagles (+3400), but both teams are big longshots.