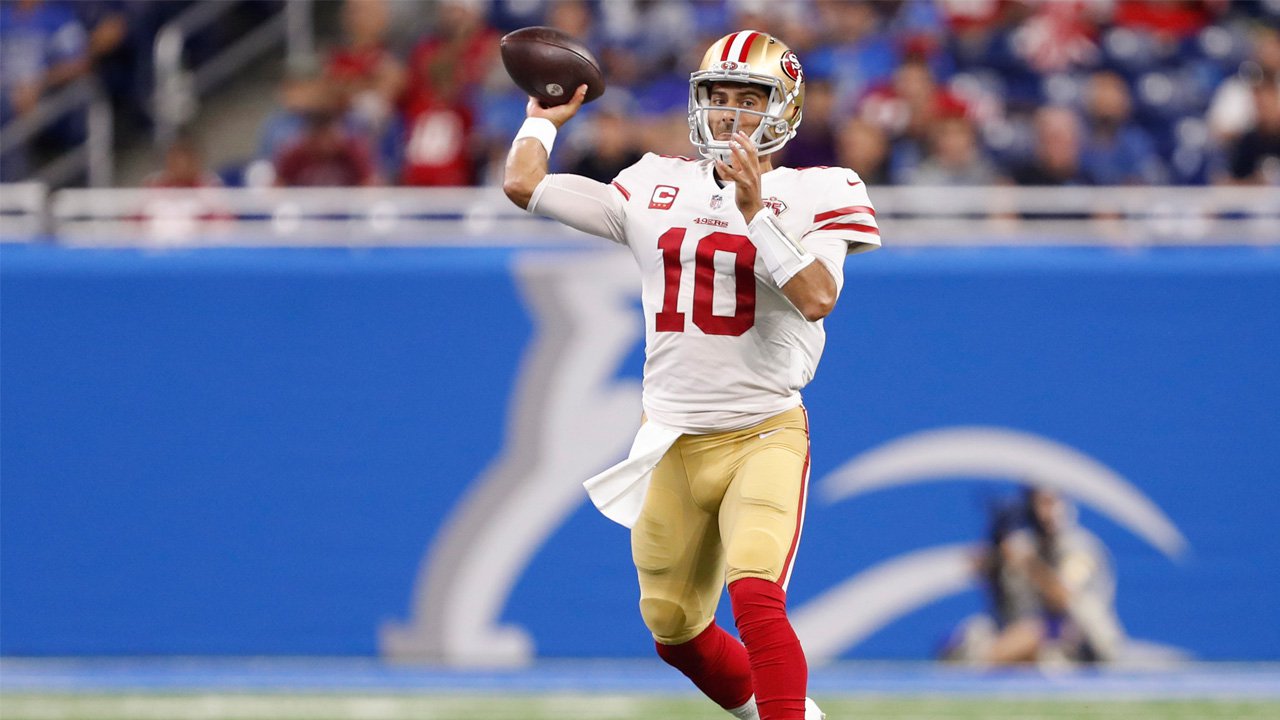 In Philadelphia, we have a matchup between teams that won in Week 1 as the Philadelphia Eagles host the San Francisco 49ers. For the Eagles, it gave them an early leg up on the rest of the NFC East, but for the 49ers is was just keeping up in the NFL’s strongest division. The 49ers are one of the top NFL betting favorites to win the NFC, and they showed why for the majority of their win over the Detroit Lions.

San Francisco is sticking with Jimmy Garoppolo at quarterback for now, but they are giving rookie Trey Lance a chance to see some game action. So far so good.

The Eagles are committed to Jalen Hurts as QB1, but it might be by default as they were one of the teams circling around Deshaun Watson. Nevertheless, he was brilliant in their win over Atlanta.

San Francisco 49ers vs Philadelphia Eagles odds are via FanDuel Sportsbook as of Sunday, September 19, 2021 at 10:15 a.m. ET. Want to see NFL betting odds from several top online sportsbooks for the day’s other NFL matchups? Check out our NFL odds.

49ers backers might be upset because depending on what number you got on San Francisco last week you might have lost the cover. They were up 41-17 in the fourth quarter before two meaningless TDs by the Lions covered the -9.5 closing line. Jimmy G played well, throwing for more than 300 yards. The only downside of the road win is that running back Raheem Mostert got hurt. Thankfully, rookie Elijah Mitchell stepped in and had a great debut, picking up 104 yards on just 19 carries. Receiver Deebo Samuel had a monster game, and I think he is due for a huge year if he can stay healthy. He has great speed and strength after the catch.

Despite giving up 33 points, San Francisco’s defense was overall solid against Detroit. Per the above, the game was essentially over, so I am not going to kill them for giving up some yards and points late in the game, even though it almost cost them. The 49ers sacked Jared Goff a few times, and he was forced to put the ball in the air 57 times. There are no real concerns from Week 1.

Are The Eagles A Mirage Or Are They Ready For Flight?

If the 49ers were pleased with their Week 1 results, then the Eagles should be excited. Not only did they get a road win, albeit against a poor opponent, but they also dominated. They were not favored in Atlanta, but they destroyed the Falcons 32-6.

Hurts was masterful in leading the offense, throwing for three touchdowns. Rookie DeVonta Smith was the team’s leading receiver, and last year’s top pick Jalen Reagor was second, and both found the end zone in Atlanta. With Hurts a threat to run for big yardage on any down it creates pressure on the defense and gives those two elusive guys room to run after the catch.

Philly’s defense was extremely impressive against the Falcons. The Eagles allowed just 136 yards through the air to experienced quarterback Matt Ryan. They dominated even though they didn’t appear to do anything special. They did get Ryan on the ground a few times but forced no turnovers. But they did make all of the plays they needed to make and shut out the Falcons in the red zone. Let’s see if they can keep it up.

This looks like a great buy spot on the road team. Sure they are on the road for a second consecutive week and lost their top running back. But this is one of the best defensive teams in the league, and they are taking on the team that overperformed the most in Week 1. The Eagles just might wind up being the best team in the NFC East, but that is a pretty low bar from what we have seen so far. However, San Francisco has the makings of a true Super Bowl contender. This is a great value spot to back them. You don’t want to miss it.

The 49ers scored 41 points last week against the Lions. That is a bad defense, but I am not sure the Eagles are much better. I am not buying into what we saw against the Falcons.

In Week 1, the 49ers ran the way they wanted to and got big plays through the air too. I am expecting more of the same on Sunday in Philadelphia. I think they can score at least 30 points. They haven't even fully unleashed Trey Lance’s trickery yet either.

The 2022 Formula 1 season is only six races deep, but the race for this season’s championship alerady appears to be down to just two drivers. Last season, Red Bull driver Max Verstappen claimed his first Formula 1 World Drivers’ Championship in highly controversial circumstances, with Lewis Hamilton denied what would have been a record-breaking END_OF_DOCUMENT_TOKEN_TO_BE_REPLACED