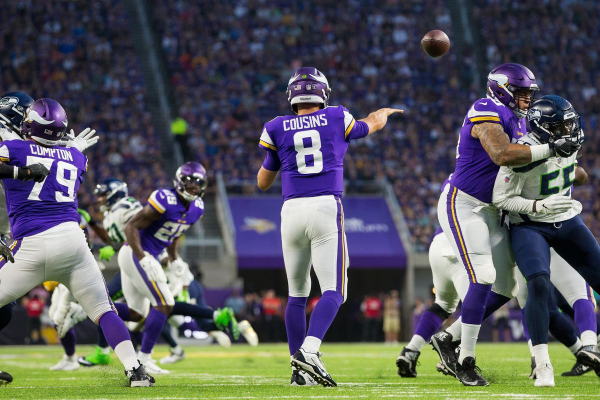 The Green Bay Packers will host the Minnesota Vikings for a huge NFC North matchup on Sunday at Lambeau Field. The winner of this game will take over first place in the division and will have the early inside track to win it. The Vikings won both meetings between the two rivals last season en route to a 13-3 record.

Both the Vikings and Packers were victorious in their season opener but got the job done in very different ways. Minnesota used a strong defensive effort and a balanced offensive attack to hold off the San Francisco 49ers. The Packers needed a miracle comeback from Aaron Rodgers and the offense to stun the Chicago Bears on Sunday night. The Minnesota Vikings are a one-point underdog in this matchup on Sunday.

The Minnesota Vikings have one of the deepest and most talented rosters in the NFL, and they showed that off in the season opener. Kirk Cousins was solid in his Vikings debut but was the offensive weapons around him that made the difference. Wide receiver Adam Thielen had six catches for 102 yards in the victory, and Stefon Diggs also had a solid game. Running backs Dalvin Cook and Latavius Murray provided a dynamic duo out of the backfield. The Vikings should have a big day on offense in this game against a weak Packers defense.

The Vikings also put on a defensive clinic in the season opener. Cornerback Harrison Smith was all over the field against the 49ers and registered a sack and the game-sealing interception in the victory. For his effort, Smith was named the NFC Defensive Player of the Week. Minnesota has one of the best defensive lines in football and will put a ton of pressure on Aaron Rodgers in this game.

An Injured Rodgers Is Still Dangerous

Packers quarterback Aaron Rodgers suffered a knee injury against the Bears in week one, but returned to lead a thrilling comeback in the second half.Rodgers has been limited in practice all week, but both teams expect him to suit up for this game. Rodgers threw for 286 yards and three touchdowns in the week one victory, but will face a Vikings defense that will look to hit him all game long. The Green Bay offensive line will play a huge role in this game in giving Rodgers time and keeping him healthy. Look for Rodgers to have another impressive performance in week two.

One of the biggest question marks heading into this game is the state of the Green Bay defense. The Packers defense looked slow and confused for much of the night in the season-opening victory against the Bears. Green Bay was able to survive in that game, but the Vikings present plenty of challenges. Veteran Clay Matthews had a costly penalty in the season opener, but had a solid game. Linebacker Nick Perry was able to seal the victory with a sack late in the fourth quarter. The Green Bay defense must find a way to slow down the explosive Vikings in this game.

Vikings Too Good For Pack

The Packers were unable to beat the Vikings in 2017, and Minnesota has improved greatly since then. A healthy Aaron Rodgers would give the Packers a better chance, but the Vikings will put pressure on him all game long. Look for the Packers to struggle to score points in this game.

Minnesota looked like a top-5 NFL team in week one, and will now try to prove their worth on the road. The Vikings have too much talent to lose to a depleted Packers team. They will head up to Lambeau Field and come away with a decisive victory in this one. Bet the Vikings +1.0 over the Packers.