Gurley Off To Slow Start For Rams; Should There Be Concerns? 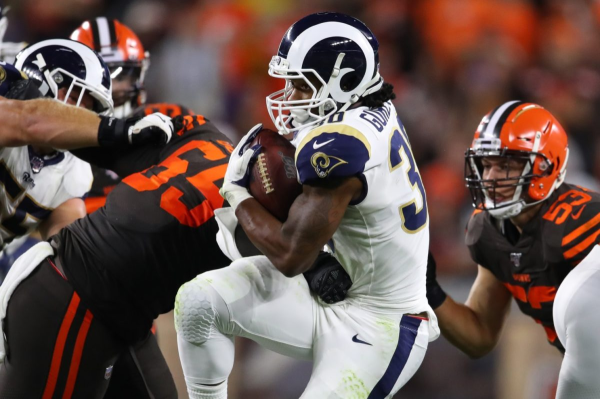 Slow start for Gurley — should anyone care? No. Here’s why.

One of the most important aspects of any offense is triggering in on your best players. Let’s look at the Los Angeles Rams. With former Georgia Bulldog Todd Gurley as the team’s top halfback, people are wondering: What’s going on with him?

In his fourth season with the Rams, Gurley has been touted as one of the top players in the league, not only at his position, and as an offensive player, Gurley has continuously shown impressive wheels, grit, and tenacity, all of the other stereotypical descriptors you want to use for a tough running back.

But something has happened. The Todd Gurley who was balling out and looking like a top-flight running back is quietly under-performing and not being his old self. So what gives?

One of the most important aspects of the pedestrian performance has largely been the fact that Gurley is not getting the number of snaps he has been accustomed to getting in most seasons. But what’s the reason for that? Should we be concerned?

When it comes to the schedule, there’s not much that needs to be noted. The fact of the matter is the following: running backs are only as good as the play-calling and offensive line. Gurley is an incredibly gifted back, but he’s under-performing, not because of an injury, but rather, because of the play-calling.

Head coach Sean McVay has stated that he largely blames himself for the lack of production. While Gurley has consistently averaged in the 20-plus carry mark for the past few seasons, this year the notable underperformance by Gurley is more of a product of McVay’s decisions from a strategic point of view.

Gurley has simply not had his number called. That’s really it. There is no vast conspiracy, and there is no determined effort to not give him the rock. The fact of the matter: there’s just no need for him.

While some speculate that it’s due to the Rams secretly stashing him for later in the season, McVay has publically denied the rumors of a so-called “load management” regimen, to give a little shoutout to our friends in the NBA, famous for “load management.”

While McVay hasn’t said it out loud, the fact is, the games have not dictated that Gurley gets the rock. The more people begin to make a commotion about this, you can rest assured that you’ll probably see the appearance of Gurley, particularly with him getting a lot more snaps than usual.

Depending on the situation, it’s largely dependent on the defense you’re playing against that sets the tone for everyone else. In this case, the Rams just played a really banged-up Browns secondary. Running the rock, if anything, is really bailing them out, rather than actually playing your guys in a situation where they can be most damaging.

Rather than running the ball, if you’re facing a rag-tag bunch of defensive backs, you’re going to probably throw the ball, right? Well that’s exactly what the Rams have done. Gurley barely touched the ball, and while he was obviously present, it just made no sense for him to be utilized with maximum effort if he wasn’t going to play a critical role in the game.

With that in mind, it shouldn’t be a surprise to those who are not quite sure why Gurley hasn’t played. Especially against the likes of the Browns, Panthers, and Saints (who have been the only above-.500 team the Rams have faced), there hasn’t been much need to risk Gurley.

Really, this is a massive case of much ado about nothing. Gurley is fine, and we have no doubt he’ll be back in full form in no time.