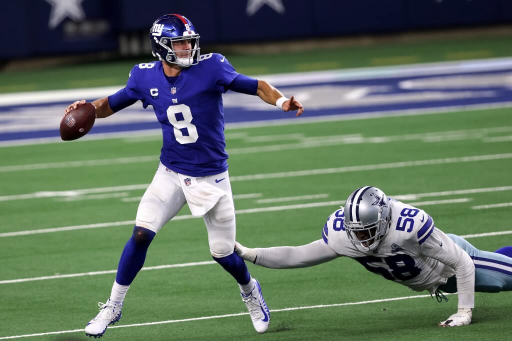 Oh by the way, that team, the Washington Football Team, is also in the midst of a quarterback crisis. Kyle Allen, a clear placeholder for Washington until they can come up with a better option, will be at the helm for Washington against the Giants Daniel Jones, who has been disappointing to say the least so far in year 2.

Both teams come in relatively healthy. The one big question for Washington was the quarterback Allen, who replaced Dwayne Haskins Jr. last week but was knocked out of the game against the Rams. He’s practiced in full this week, so Allen is in, and Alex Smith is back to being the backup. The one designation to watch will be Darius Slayton, the young wide receiver for the Giants. He opens up the offense for Jones, but he’s been limited all week with a nagging foot injury. If Slayton doesn’t play, an already fledgling New York offense becomes even more predictable.

Here’s the big question for Danny Dimes this week: Are the Giants THAT bad? The G Men have played a tough schedule, no doubt. Losing to the Steelers, 49ers and Rams is not shameful nor surprising. And against the Bears and Cowboys, they were close. Both games came down to the final possession. Some believe the Giants just need a bit of an easier opponent and they’ll finally click in. However, the box score against the Cowboys last week raises concerns.

If Jones can’t light up the ‘Boys, one of the worst pass defenses in the league, then who can he light up? Jones and the Giants passing offense only put up 222 yards and both the offensive touchdowns came on the ground. Add in a Washington pass rush that can be formidable behind Chase Young and Ryan Kerrigan, and this matchup may not be as friendly as it seems. The Giants offensive line has been brutal. A game prop on the Giants point total might be in order. The over/under is 22.5 with the under sitting at -112. I like a rare, low-scoring game here.

This is a game to leave your fantasy players on the bench. In fact, if you have a lot of Giants and Washington players on your fantasy team, you don’t have much of a fantasy team. But because this matchup is short on individual stars, it presents an opportunity. Someone has to score, right? Only one player in the game has a minus prop number to score. That’s Antonio Gibson who’s number is -112. Everyone else is offering odds, so you might want to put a little juice on Evan Engram (+200), Wayne Gallman (+225) or Terry McLaurin (+200). Be aware, though, that McLaurin is going up against one of the top cover corners in the league in James Bradberry.

I mentioned earlier that the Slayton injury designation looms large. He was the lone bright spot statistically last week against the Cowboys as he tallied 8 catches on 11 targets for 129 yards. Was that simply because he was going against an awful Dallas secondary or did Jones and Slayton finally establish a connection? Expect Giants coach Joe Judge to look for that answer early in this game. Whichever team gets an early lead has a huge edge since neither offense is built to come from behind. If you believe in Slayton, and he ends up playing, the Giants have the best weapon on the field and could ride that to victory. Slayton’s scoring prop is also pretty tantalizing at +165.

If you can tease this one, or at least buy at extra half point, I think that’s the play. This is a low scoring game and a close game. Neither team will run away from the other, which means getting points is at a premium. The 2.5 number makes me nervous about a Graham Gano time expiring field goal, so monitor the line to see if you can get 3. But either way, I’ll take the Washington Football Team against the spread in what could be an ugly game.