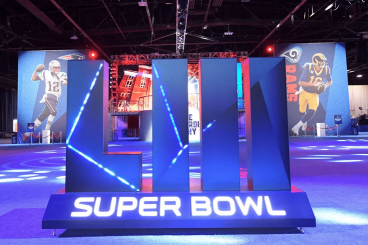 Super Bowl Sunday is finally here! The New England Patriots are looking to secure their 6th Super Bowl in the last 20 years, while the Rams are trying to begin a dynasty with their first under its current regime. The game kicks off around 6:30 EST on CBS with Jim Nance and America’s favorite broadcaster, Tony Romo, on the call. Now, let’s get into all of the different potential edges that I think have not really been hit home enough in this game. We have all read/heard a million different takes on what will happen in this game, so I’m going to try and throw out a few things that the biggest names aren’t hitting on.

Patriots Will Move the Ball

How are the Patriots going to move the ball? Well, the Patriots always seem to find a way to move the ball efficiently against even the best defenses. The first place that I like attacking for the Patriots is the fact that Gronk should be able to run more routes in this game than he has recently. Most of the Rams pressure comes from Aaron Donald and Ndamukong Suh up the middle. Since they lack elite edge rushers, I expect to see Gronk chip block less and run more clean routes. This should allow him to get more involved in the game.

Julian Edelman will be covered in the slot by Roby-Coleman, the Saints’ most hated player in football. Roby-Coleman is short, but he is really good at covering slot receivers. I think Edelman will struggle more than usual out of the slot, but I think that the Patriots can get him matched up with Marcus Peters on the left side of the field if they do want Edelman to get away from Coleman. The other receiving options should struggle v. Aqib Talib and either Roby-Coleman or Peters. I’d expect Dorsett to line up with Peter more than Hogan, so I like him more for his big-play potential.

The Patriots‘ running game is a 3-headed monster with James White, Sony Michel, and Rex Burkhead. Burkhead is my favorite of the bunch based on the fact that he is more versatile than the other 2. Burkhead can catch passes and pound the rock, making the Pats offense more unpredictable when he is out there. The other 2 should simply be game-script dependent. White should be in on 3rd downs and obvious passing situations when trailing, and Michel will be in the game to run the ball with a lead more often than not.

Rams Need to Step Up Their Game

The Rams‘ passing offense is really scary for me to break down. I think the Rams will need an ancillary piece or two to step up and make plays because I think either Cooks and Woods will struggle. I expect Cooks to see very similar coverage to Tyreek Hill, which really hindered the faster Tyreek Hill. I also expect Woods to be shadowed be Stephon Gilmore. Gilmore is a great corner, so I don’t expect Woods to see 11 catches, but I like him better simply because guys are more likely to get loose in single coverage than in double coverage. All of the other Rams pass-catchers should be in plum matchups, but they are all not that good. I do expect to see Gerald Everett, Tyler Higbee, and Josh Reynolds catching more passes than most.

The Rams’ running game is a mess, but it should be relatively productive. Gurley has struggled recently, and the possibility of injury has been heavily discussed, but I don’t think he is injured. I also don’t think that it matters which one runs the ball. The only advantage Gurley has had on Anderson is his pass-catching ability. I think the Rams should use Gurley as a pass-catcher more than they have been recently to mitigate the heavy coverage on Cooks and Woods.

Tonight’s NBA betting schedule is lacking in overly compelling matchups, but tonight’s action will also be taking place with a few notable names missing. Booker, Morant, and Lillard Sidelined Tonight and Beyond Booker Out Versus Pistons Due to Hamstring Injury The Phoenix Suns lost Devin Booker (hamstring) on Tuesday against Golden State but closed out END_OF_DOCUMENT_TOKEN_TO_BE_REPLACED