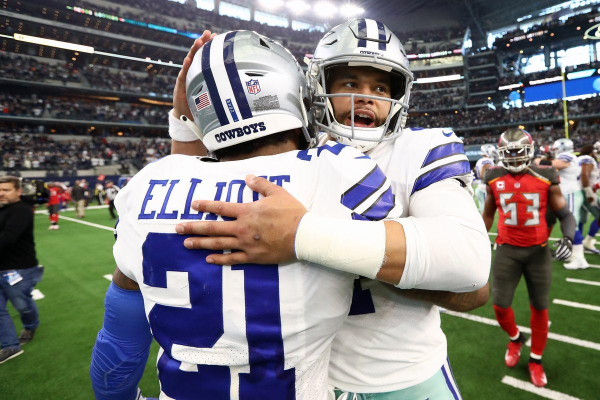 The Dallas Cowboys head to the Meadowlands to take on the New York Giants in a game that is basically meaningless for both teams. This adds a very interesting layer to this game that has a lot of unknowns. The line on this game Giants -7. This indicates to me that Vegas believes that these teams will not be playing this game straight up.

The Cowboys have claimed that they will not rest the starters, but it has now come out that Ezekiel Elliott will not play in this game to rest for next week’s playoff game. Zach Martin will also do the same. The real concern here is, “Will the rest of the guys do the same thing?” I would find it odd that we get a report mentioning that the Cowboys best player is sitting but nothing else, and then we see them just rest everyone. However, I think it is possible that the other starters do not plan to play the entire game. In 2016, the Cowboys had the one seed locked up on week 17. They claimed they would play their starters, but then Zeke didn’t play and the other starters played a few series and then came out. I think that this is a possible outcome in this game, which would clearly swing things.

The Giants haven’t slowed anything down yet, but OBJ hasn’t played in three weeks due to an injury that I believe wouldn’t have kept him out any games in a playoff run. I am somewhat concerned that the Giants also hold back in this game to some degree. Now, there is nothing to suggest that this will happen, but there is definitely a narrative to suggest that it is possible. The Giants need a QB in the draft, or they should at least be interested in doing so.

The other 2 main teams that are looking to draft a QB are the Jaguars and the Dolphins. The Dolphins are going to be behind the Giants, but the Jaguars and the Giants are tied in record, but if they both lose, the Giants will end with a better pick. The higher pick will have leverage if the other team tries to trade up, which would be really valuable if this is what the Giants want to do. Also, there is only one QB that is even viable at a top 10 draft pick, which is why being the first of these teams to pick could be incredibly valuable. There has been virtually no talk of this at all, but I think that it is possible that this is in the back of the Giants’ mind.

The biggest factor in this game is how much these teams play their starters and their motivation. The narrative surrounding the Giants in the football world right now is that the Giants may try to show off Saquon to attempt to win the Rookie of the Year award and prove that the pick on Saquon was a good one. I understand this possibility, but there has been as much talk about that in Giants camp as there was about them tanking this game to stay ahead of the Jaguars in the draft order. This isn’t a thing that the Giants have voiced at all, so I think that buying into that completely is really not the best idea from a process standpoint.

Everyone is talking about one narrative and not the other, which gives me enough of a reason to pause when it comes to taking the Giants here. I think that it is possible that the Giants really want to lose this game. 7 is a lot to give up for a team that really shouldn’t even want to win this game, so I will take the Cowboys +7 and hope that the lack of motivation on the Giants’ end helps the Cowboys stay within a score in this one.

Tonight’s NBA betting schedule is lacking in overly compelling matchups, but tonight’s action will also be taking place with a few notable names missing. Booker, Morant, and Lillard Sidelined Tonight and Beyond Booker Out Versus Pistons Due to Hamstring Injury The Phoenix Suns lost Devin Booker (hamstring) on Tuesday against Golden State but closed out END_OF_DOCUMENT_TOKEN_TO_BE_REPLACED