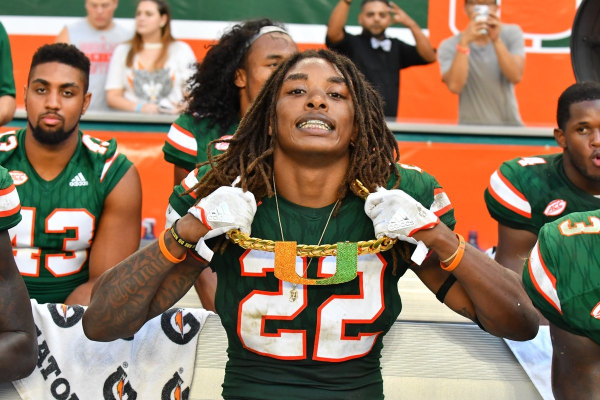 The first college football game of week 5 kicks off on Thursday as the North Carolina Tar Heels charge into Miami to take on the Hurricanes in a ACC showdown. The Tar Heels have played just three games thus far this season and hold a record of 1-2 while the Hurricanes have played a full slate of four and hold a record of 3-1. The Hurricanes think that this year is there year to win an ACC Championship and North Carolina is looking to play spoiler but their chance is still alive albeit a longshot. This should be a good game on a Thursday night. Look for Miami to win this game handily.

North Carolina comes into this one with losses at California and East Carolina. Their showdown with Central Florida was cancelled due toHurricane Florence. Their lone win of the year was against Pittsburgh 38-35. North Carolina is struggling on both sides of the ball to begin the year.

Nathan Elliott has thrown for 669 yards in three games and their passing attack ranks 72ndin FBS. Their rushing attack is no better as they rank 79thin the nation in rushing yards per game with 166 yards a game. Antonio Williams is the team’s leading rusher with 257 yards and three touchdowns. Anthony Ratliff-Williams is the leading receiver with 11 receptions for 230 yards. They allow 33.3 points a game which is 104thin the nation.

North Carolina allows 202 yards a game on the ground which is not very good and ranks 101stin the nation to this point in the year. After this Miami game, the Tar Heels go on to play a relatively easy schedule which could put them up in the discussion for the ACC Coastal crown.

They play Virginia Tech, Syracuse, Virginia, and Georgia Tech before taking on Duke in a big rivalry showdown. NorthCarolina has the ability to shock a few teams if they can start to click in all facets of their game.

Miami has won three in a row after losing their season opener to LSU by a score of 33-17. They have beaten Savannah State 77-0, Toledo 49-24, and their latest victory over FIU by a score of 31-17. They are moving the ball very well and are shutting down the opposing offenses. Miami is gaining 449 yards a game. 239 of that is through the air while 209 of that is on the ground.

On defense, they have been nothing short of spectacular. They only give up 223 yards on defense a game. 78 of that has come on the ground while 145 yards is through the air. Miami has scored 43.5 points a game while holding their opponents to just 18.5 points a game. While a lot of this has to do with the opponents that they face, you can’t argue that Miami isn’t a solid team this year.

The 16th ranked team in the nation has to be able to hold North Carolina down and will shut up a lot of critics. Due to the easy schedule, there has been some talk about how legit Miami actually is. A win in this one would put some questions to rest.

Look for Miami to come out hungry and searching for a win. This game will set the tone for the rest of the season for both teams. A North Carolina win would give them the hope of turning it around this year and the appearance of getting to the ACC Championship game. Miami is looking to keep their playoff hopes alive and are now going to have to run the table through the ACC. We think that Miami will plow through North Carolina due to their experience and talent.