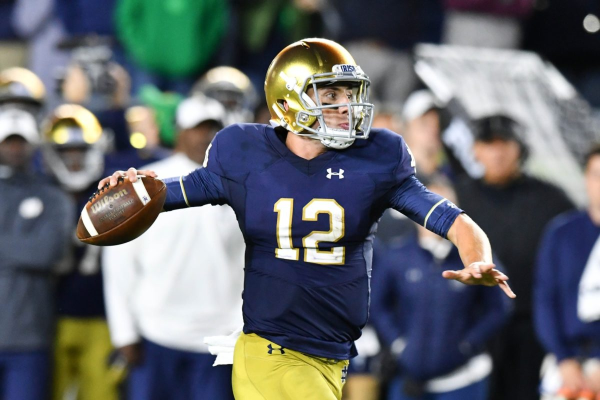 Week one of the college football season wraps up on Labor Day as the No. 9 Notre Dame Fighting Irish travel to Papa John’s Cardinal Stadium to take on the Louisville Cardinals. These are programs that had opposite seasons last year.

For Brian Kelly and the Fighting Irish, they went unbeaten in the regular season and suffered their first loss in the national semifinals to the eventual champion Clemson Tigers, 30-3. Louisville finished 2-10 and now has a new leader in head coach Scott Satterfield. Opening kickoff for this one is scheduled for 8 pm ET.

Notre Dame comes into this season with a lot of question marks. Despite their fantastic season last year, they lost a lot of their starters, including their best running back (Dexter Williams), their best receiver (Miles Boykin) and several of their best defensive players. In fact, they had 11 players who ended up going to the NFL. To have success this season, Kelly will need to be able to fill these voids in the roster.

After a rough season last year, Bobby Petrino is out, and Satterfield is in at Louisville. Satterfield is coming from Appalachian State, where he was 47-16 during his tenure. The problem, though, is the roster just isn’t very good right now, and he has a lot of work to do. You certainly can’t hold too much against coach Satterfield this season as it may take a few years to truly get his thumbprint on this team.

The point spread for this one currently sits with Notre Dame being an 18-point favorite despite playing on the road. The over/under on total points scored is set at 55.

Louisville is 0-6 against the spread in its last six games as the underdog.

After going undefeated in the regular season, Notre Dame got their shot in the postseason last year. Unfortunately, after being embarrassed in that game against Clemson, they have to hit the reset button and get back to work to put themselves in a similar position. The experts are still showing them some love, ranking them No. 9 going into the season, but they will have a little more work to show they deserve that ranking.

One advantage they do have is that while many of last year’s stars have moved on, their quarterback, Ian Book, is back. Last season as a junior, Book went 214 for 314 for 2,628 yards, 19 touchdowns and seven interceptions. He also rushed 95 times for 289 yards and an additional four touchdowns.

While he did not play well against Clemson last season in the semifinals, he certainly is capable of leading the Irish to a strong offensive season again this year.

While the Louisville offense was pretty abysmal last season, the Cardinals did not lose many of their starters (their leading wide receiver was the only major loss) and will look to improve under Satterfield’s tutelage.

It is likely that Jawon Pass will once again get the start under center for Louisville. Last season, Pass played in 11 games, going 162 for 300 for 1,960 yards, eight touchdowns and 12 interceptions. Admittedly, those numbers are not very good; however, the hope is that he can take some steps in the right direction after really having his first true full season last year.

Still, it would be misguided to say that the offense or the defense for Louisville will be good this season as both units ranked towards the bottom of all programs last season.

Irish To Win Straight Up And Cover

Any time that you lose so many players to the NFL like Notre Dame did, it has to be seen as a good and a bad thing. On the one hand, you have a system and recruiting that prepares the top athletes for the next level. On the other hand, you are left filling a bunch of voids in the roster. For Kelly, he has a lot of work to do if he wants to make the NCAA “Final 4” of football in back-to-back years.

Despite the work that Kelly has to do, it still isn’t even close to the work that Satterfield has to do at Louisville. Even though there is a renewed sense of optimism that the Cardinals could be heading in the right way, it certainly isn’t going to all come together in week one of the regular season. My money is on Notre Dame at -18.