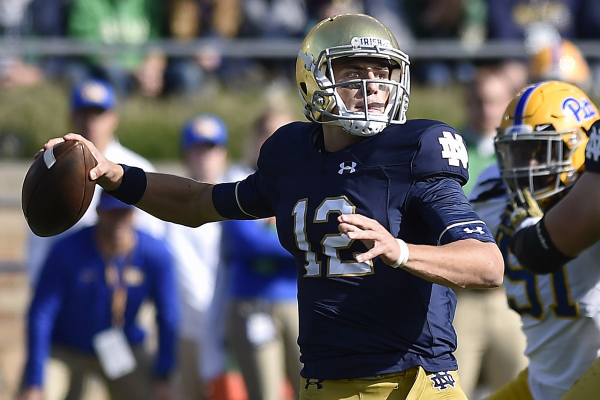 The Notre Dame Fighting Irish enter the 2019 season as one of the favorites to win the College Football Playoffs, but they do have some question marks. This will be the 10th season under head coach Brian Kelly, and expectations are extremely high in and around South Bend. Notre Dame rattled off a perfect 12-0 regular season to reach the College Football Playoffs a season ago. The Fighting Irish took on Clemson in the Cotton Bowl in the playoffs and suffered an embarrassing 30-3 defeat. Notre Dame did lose several players to the NFL after the 2018 season, but this is a loaded roster that has a chance to have another perfect regular season. The schedule is tough once again, especially with road games at Georgia and the University of Michigan.

Notre Dame will enter the 2019 season with much of the same coaching staff, but their roster will look quite a bit different. The Fighting Irish had several players drafted in the 2019 NFL Draft, but there is still plenty of talent left. Brandon Wimbush decided to transfer to UCF in the offseason, and it makes the quarterback battle pretty clear in South Bend. Notre Dame has made quarterback Ian Book a captain ahead of the 2019 season, and he will be a huge key to the season.

Ian Book: Ian Book took over the starting job a season ago and will have the keys to the offense this season. Book completed over 68 percent of his throws in 2018 and threw 19 touchdowns to just seven interceptions. If Notre Dame is going to make the playoffs again this season, then it will be Book who is leading them.

Chase Claypool: Claypool was the second leading receiver a season ago, but he will be the top target for Book this season. Claypool had 50 receptions for 639 yards and four touchdowns in 2019 and will need to have a monster season to help out the Fighting Irish offense.

Asmar Bilal: The Fighting Irish lost a ton of talent on the defensive side of the ball, and they will be counting on Bilal to take on a leadership role this season. Bilal had 50 tackles a season ago but will need to lead the team in tackles if the Fighting Irish are going to challenge for a spot in the College Football Playoffs.

Expectations will be high once again for Notre Dame, but this year won’t be as successful. The Fighting Irish have a pair of difficult road games on the schedule, and they will be tested at home as well. Vegas has set the over/under at 9.5 wins, and the smart bet is taking the under. The Fighting Irish are still going to have a terrific regular season, but they won’t win more than nine games. Notre Dame is going to miss out on the College Football Playoffs this season, and things could get interesting in terms of Brian Kelly’s future in South Bend. The Fighting Irish will be a fun team to watch, but they are going to take a big step back this season.