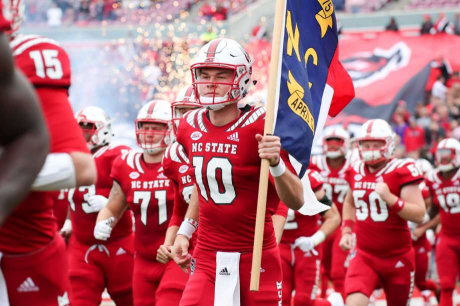 The Tennessee Volunteers took a hit this week with the news that linebacker Darrin Kirkland Jr. is walking away from the game because of health reasons. Knee problems limited him in 2016 and kept him out for all of 2017. However, Kirkland has 28 career starts under his belt and accumulated 51 total tackles last season. His absence will surely be noticed on the Tennessee defense in 2019.

After leading Virginia to back-to-back bowl games, Bronco Mendenhall has been rewarded with a contract extension through the 2024 season. He’s still just 16-22 overall in his three seasons with the Cavaliers, but after an 8-5 campaign in 2018, including a Belk Bowl win, Virginia feels good about the direction of the program and wants to lock up Mendenhall long-term.

Not in the Cards

Even though Urban Meyer is officially retired and USC officially has a head coach, the speculation about Meyer taking over the Trojans if and when Clay Helton is fired has been steady ever since the former left his job at Ohio State. However, the thought isn’t exactly on Meyer’s mind these days. In an interview with a Columbus newspaper, Meyer stated “I believe I’m done. I think I’m done” with regard to coaching again. It’s not the most definitive statement ever, but he doesn’t sound like a guy who’s eager to come out of retirement.

Three former UCLA football players are suing the university in separate lawsuits for negligence in handling their injuries. Offensive linemen John Lopez and Poasi Moala claim UCLA, while Jim Mora was head coach, mishandled head injuries, while fellow offensive lineman Zach Bateman’s complaint relates to severe injuries to his feet. The lawsuits also mention Mora, the NCAA, associate trainer Anthony Venute, and former offensive line coach Adrian Klemm. The players claim proper protocol wasn’t followed and that they were sometimes rushed back to the field before their injuries were fully healed. UCLA has denied any wrongdoing, so it looks like it’ll be up to the courts to decide.

Make Up Your Mind

The fate of five-star wide receiver recruit Bru McCoy remains very much up in the air. McCoy signed with USC in December but then had second thoughts and mulled a move to Texas. He was released from his letter of intent and then signed with Texas in January and went through spring practice with the Longhorns. However, the California kid apparently got homesick and has confirmed that he’s going back to USC.

While McCoy tries to make up his mind, there have been several other less high-profile transfers over the past week. Let’s get caught up:

Former Florida offensive lineman Landon Dickerson will be heading to Alabama as a grad transfer. Leg injuries hindered his career with the Gators, but Dickerson should provide the Crimson Tide with much-needed depth up front.

Alabama had a spot open with long snapper Scott Meyer graduating last month and announcing this week that he’ll go to Vanderbilt as a grad transfer with two years of eligibility left.

Former Penn State safety Ayron Monroe will spend his final year of eligibility in 2019 at Temple. Monroe has mostly been a special teams player and reserve at Penn State but could earn significant playing time with the Owls.

After deciding to leave Kansas State, wide receiver Isaiah Zuber is on his way to Mississippi State as a grad transfer. Zuber caught 127 passes in his three years at K-State, so he’s a big loss for the Wildcats and an important addition for the Bulldogs, two teams that will play the third week of the season.

UConn hopes they’ve found an answer at quarterback with NC State transfer Micah Leon. After two seasons at NC State (but not appearing in any games), Leon will have three years of eligibility left, and according to UConn’s press release, he’ll be eligible right away.

Bowling Green is also getting a quarterback from the ACC in the form of Boston College’s Matt McDonald. He appeared in two games last season as a redshirt freshman, but it seems likely that McDonald will have to sit out a year.

Former USC wide receiver Randal Grimes has officially transferred to UNLV. Grimes appeared headed to Minnesota earlier this offseason but changed his mind. The Las Vegas native will seek a waiver to become eligible right away after catching just two passes in his two years with the Trojans.