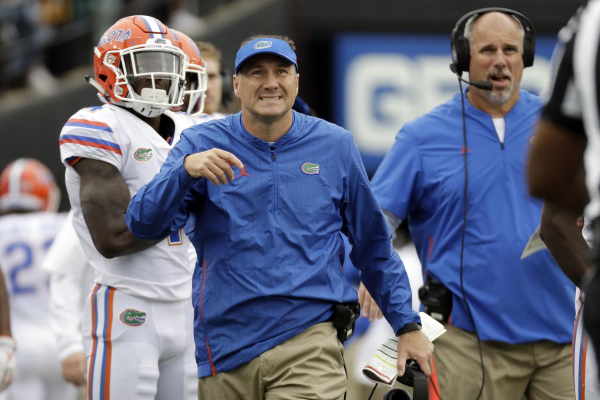 It may seem like the college football season is a long way off, but there are transfers galore and some off-field news to catch up on from the past week. Let’s check out anything you may have missed.

Something in the Water?

What is going on with the Florida Gators? A week after freshman quarterback Jalon Jones parted ways with the program following complaints of sexual misconduct from two female students, there is more off-field news out of Gainesville. Freshman cornerback Chris Steele, who was roommates with Jones, has also entered the transfer portal.

Steele made the decision to leave after his request to change dorms to get away from Jones was denied. He reportedly had unspecified complaints about Jones dating back to January. Florida head coach Dan Mullen reportedly traveled to Steele’s home in California in an effort to get him back at Florida, but Steele doesn’t appear willing to reconsider, as he’s upset at being associated with the police report relating to Jones.

If that weren’t enough, junior cornerback Brian Edwards was arrested this week for misdemeanor battery. According to reports, Edwards grabbed his girlfriend by the neck while trying to prevent her from leaving during a verbal altercation. Edwards has played in 18 games over the past two seasons. The school has not issued a public statement relating to the arrest.

Former USC quarterback Matt Fink will be finishing his career as a grad transfer at Illinois next season. Well, at least that’s what we thought, but soon after reports of Fink committing to the Fighting Illini, Fink tweeted that he has not committed anywhere and is still weighing his options. Fink’s father apparently confirmed the initial report that he was going to Illinois, but that is not yet set in stone. This latest twist continues a frustrating offseason for Illinois, as the program has had three grad transfers, all wide receivers, commit only to back out.

Of course, Fink could still end up going to Illinois. Lovie Smith’s team also appears to be in the running for former Penn State quarterback Tommy Stevens. Currently, Illinois has two redshirt freshmen and one true freshman quarterbacks on their roster, so they better hope they get either Fink or Stevens to Champaign.

Coming off a 1-11 campaign in 2018, Rutgers will have a new face at quarterback this season, adding Texas Tech transfer McLane Carter. The left-hand throwing quarterback will be eligible right away and have one year of eligibility left. Carter actually began last season as Texas Tech’s starter, only to get hurt in the season opener. He saw some action as a backup later in the season and ultimately started the team’s season finale, a loss to Baylor. Carter will have to beat out Artur Sitkowski in preseason camp for the starting job.

Former Ohio State quarterback Matthew Baldwin is heading back to his home state of Texas, announcing that he’ll transfer to TCU. Baldwin redshirted last season but may have had a chance to push Georgia transfer Justin Fields for the starting job with the Buckeyes this season. However, Baldwin wanted to move closer to home.

After leading Arkansas in receiving last season, wideout La’Michael Pettway will spend next season as a grad transfer at Iowa State.

Former South Carolina running back Ty’Son Williams is officially heading to BYU as a grad transfer. Williams actually began his career at North Carolina but rushed for nearly 800 yards for the Gamecocks over the past two seasons.

Speaking of North Carolina, former Tar Heels running back Jordon Brown is transferring to Kansas State for his final year of eligibility. The Wildcats lost all three running backs that saw the field last season, which should open up plenty of playing time for Brown.

One more potential transfer to look out for this offseason is former Michigan quarterback Brandon Peters. Multiple outlets are reporting that Peters has entered the transfer portal as a grad transfer but will have two years of eligibility left. Peters has fallen way down the depth chart at Michigan since starting the Outback Bowl at the end of the 2017 season. However, as a former four-star recruit with some experience as a starter, Peters should receive plenty of attention on the transfer market, especially as a grad transfer with two years of eligibility.