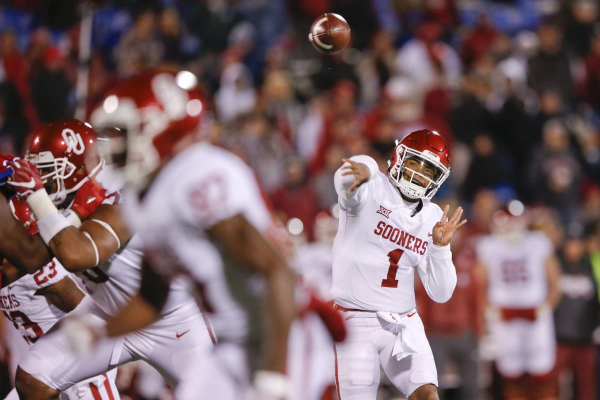 It was a hodgepodge of news in the college football world this week. The Major League Baseball draft created some of the more intriguing headlines of the week. Nevertheless, a lot has happened in the last seven days, so let’s play catch up.

Oklahoma quarterback Kyler Murray was the 9th overall pick in the MLB Draft, being chosen by the Oakland A’s. Murray, if you didn’t know, moonlights on the Oklahoma baseball team. He was regarded as perhaps the best pure athlete available in the baseball draft with a ton of upside, which is why the A’s made him a top-10 pick. Oakland, of course, is aware that he also plays football but did not let that stand in their way of taking him.

The A’s have reportedly offered Murray close to a $5 million signing bonus. His contract will also allow him to play football for Oklahoma this fall. Coming out of spring practice, Murray is Oklahoma’s projected starter for the 2018 season, taking over for Heisman winner Baker Mayfield. However, at some point, Murray will likely have to give up football to pursue baseball full-time, perhaps before he’s exhausted his eligibility at Oklahoma. But for now, he will look to lead the Sooners back to the College Football Playoff.

North Carolina was also affected by the baseball draft. Wide receiver recruit Jordyn Adams has decided to pull out of his commitment to play football for the Tar Heels and instead play baseball after the Los Angeles Angels drafted him 17th overall. Adams was a top-200 recruit and could have been helpful right away on a UNC team coming off a disastrous 2017 season. On top of that, his father is North Carolina’s defensive line coach. However, Adams will likely get a signing bonus worth more than $3 million to go play baseball for the Angels, which makes it a little easier to choose baseball over football.

The Florida State Seminoles suffered a loss this past week in the form of offensive lineman Josh Ball. The school did not provide details about why Ball is no longer on the roster other than saying that he is “not in good standing” with the university. Last year, Ball was accused of battery, although no charges were filed, so his absence from the football team could be related to that. Ball finished last season as Florida State’s starting left tackle, giving the Seminoles a vacancy to fill on their offensive line.

The Houston Cougars announced the transfer of two players this week: former Tennessee quarterback QuintenDormady and former Baylor running back Terrence Williams. Both players will be eligible right away. Dormady began last season as the starter at Tennessee, but his season was cut short due to injury. At Houston, he’ll have to battle D’Eriq King for the starting job. King started Houston’s final four games last season after leading the Cougars to a comeback win over previously unbeaten South Florida.

Williams, meanwhile, rushed for over 1,000 yards at Baylor in 2016 but was held back due to a shoulder injury this past season. He’ll have a chance to step in as the starter for the Cougars right away after last year’s leading rusher Duke Catalon left the program in March. With the additions of Dormady and Williams, Houston has now added five graduate transfers this offseason.

Speaking of graduate transfers, the SEC has finally abolished its rule preventing grad transfers from staying in the league. Alabama coach Nick Saban has taken a lot of heat for blocking his players from transferring to other SEC schools after they get their degree from Alabama. Those players will now have the freedom to use their last year of eligibility anywhere they want. The SEC also passed a rule allowing players at schools that are serving postseason bans to transfer within the SEC without sitting out a year. That rule will allow former Ole Miss wide receiver Van Jefferson to play at Florida this fall rather than having to sit out a year.

Finally, we’ll close with some good news. Syracuse quarterback RexCulpepper was given a clean bill of health after being diagnosed with testicular cancer earlier this year. Culpepper will have a scan in six weeks to confirm that the cancer is gone, but he has been declared cancer free after enduring 100 hours of chemotherapy. Amidst his battle with cancer, Culpepper threw a touchdown pass on the final drive of Syracuse’s spring game in April. He’s expected to be with the Orange when camp opens later this summer and compete to be the team’s backup quarterback behind senior incumbent Eric Dungey.