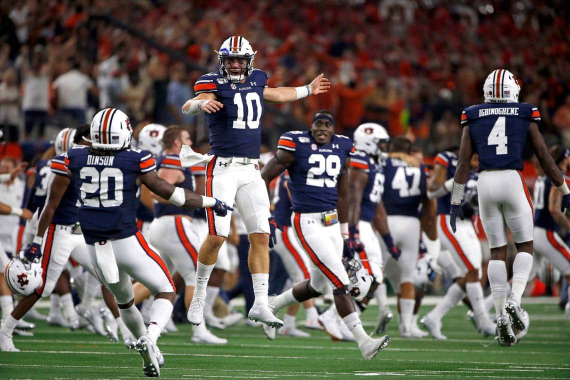 After averting disaster with a Hail Mary throw, is Auburn still America’s best? Not even close.

On Saturday, Auburn topped Oregon in a not-so-common SEC-Pac-12 showdown that ended as most SEC homers expected it to end — minus the unforgettable last-second touchdown off of a Hail Mary heave. The SEC victory over a conference that has been winless against SEC opponents going on more than a decade was not unexpected.

While the Pac-12 is still reeling, as the days of Matt Leinart and USC are now a distant memory, the SEC now reigns supreme in the minds of college football fans as the best conference in the land. The Auburns and Alabamas of the world command tremendous respect, and rightfully so.

That said, if someone were to suggest that Auburn is the best in the country, just do this: point, laugh, and put more money on Clemson to win everything at slightly better than even money, depending on the market.

There are a lot of SEC homers that are obsessed with constantly proclaiming the superiority of the conference, and to be fair, they have a solid case. The SEC has continually dominated recent College Football Playoffs, BCS polls (back in the good ol’ BCS era), and has even dominated recent championship games, particularly in terms of appearances.

Because of this affinity for particular teams, it’s only natural that people correlate the teams’ successes with their associated conferences. And while, sure, there are some conferences that certainly dominate over others — no one would ever unironically argue that the MAC is better than the SEC, for example — it’s about teams more than conferences.

While the SEC by-and-large is a better conference, the ACC’s Clemson Tigers, the reigning national champions, are still the team to beat. While ACC homers might smirk at the SEC homers, gloating in the fact that the ACC triumphed over the perennial SEC and championship favorites in Alabama, the truth is, Alabama has done its fair share of walloping on the ACC as well.

But after Clemson’s lambasting of the Tide in the most-recent national championship game, there is no doubt that the obsession over SEC dominance has somewhat cooled down. But when it comes to Auburn, coincidentally Alabama’s biggest rivals, are they really the best in the nation, especially after their miracle win?

No, not even close. And in fact, that victory over the Oregon Ducks should, more or less, be a strictly moral victory in many regards.

A moral victory is a victory that happens in “name only.” In the college football realm, nobody is going to pretend that winning a major come-back against a pretty solid Oregon team is just a moral victory, but the Auburn fans who are lost in the elixir of victory need to wake up. Auburn is still a very unpolished football team.

While there is a greater sense of identity than they’ve ever had, the best bet in the college football marketplace, especially to win it all, still has to be Clemson, followed by Alabama and Oklahoma. Georgia continues to impress as well, but really and truly, this previous “victory” exposes that Auburn has some serious, serious flaws.

And while they are still a competitive team that should be proud of the grit, tenacity, and whatever overused sports cliche you want to use, this game exposed the fact their team has some serious flaws. In the SEC running, they are easily the fourth man out, trailing Alabama, Georgia, and LSU.

To win the SEC, Alabama still reigns supreme, and while the LSU Tigers are still in the mix for a sleeper SEC squad, don’t buy into the hype around this Auburn team — they are prime fade material.