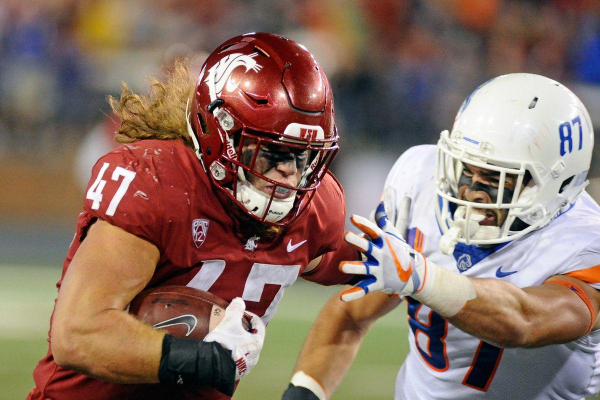 The Alamo Bowl in San Antonio, Texas is the host to Iowa State and Washington State tonight. Iowa State comes into this game as a 2.5 point underdog after an 8-4 season.

Iowa State has only lost one of their last 5 games and that was a game at Texas. That loss is just fine for an 8-4 team. Really, all of Iowa State’s losses are “fine.” They lost @ Iowa, Oklahoma, and @ TCU early in the season. All of these games were within 10 points and close throughout. TCU was much better at the beginning of the year and they still were not a horrible team most of the season. Iowa State did have 2 major wins in a row with wins over Oklahoma State and West Virginia. The West Virginia win was extremely impressive defensively. They held a dynamic passing attack to just 14 points and they really suffocated Will Grier all night long.

Washington State only has two losses on the year to USC and Washington. The USC loss looks bad now, but it was a close game at USC earlier in the year when USC looked slightly better than they did to end the year. The home loss to Washington to keep them out of the conference championship game was really rough for the Cougars. They run an air raid offense, which is usually a big problem for opposing defenses. Washington boasts one of the best pass defenses in the country. The biggest issue is that it was snowing in this horrible matchup. Washington State will benefit playing in a nice dome in this game because the elements are not their friend.

This game is strength versus strength. The Washington State offense and the Iowa State defense are the reasons these are top 25 teams. When you look into Iowa State’s defense, I would probably start by considering them to be a solid to good defense. The context here does matter though. Watch what the Big 12 offenses do to other “great defenses” around the country in the bowl season. They’ll score points because that is what they do. What Iowa State did to Oklahoma and West Virginia were actually really impressive performances. Those two teams run an offense similar to what the Cougars run. I have heard a lot of people call them both and “air raid offense.” Is that wrong? Not necessarily, but I disagree with the notion that they run the same air raid offense that Mike Leach does. I’d make the argument that they’d like to pass more than those other teams and it’s just run in a slightly different style. West Virginia struggled to stop the pass rush of Iowa State and Will Grier really couldn’t do anything all game.

Matt Campbell, Iowa State’s head coach, is one of the top defensive minds in college football, which is what makes this so interesting. We have two coaches of an elite caliber on opposite sides of the ball with 6 weeks to prepare. I think that this extra time benefits Washington State more than it will Iowa State because of the adjustments that can be made over that time period. Washington State will have multiple games of tape to watch this Iowa State defense and how they attempt to get pressure on the QB in unique ways. Gardner Minshew had a historic season because of the offense and weapons at his disposal, but if you give him time, Washington State will find ways to move the ball.

At the end of the day, I think the time to prepare gives Washington State the advantage in this game. If Minshew and the offensive line can pick up the correct protection, unlike West Virginia and Oklahoma (Kyler Murray just ran away from the pressure to create plays), I think that the Cougars will score points a little easier than the Cyclones are expecting. Sometimes when your plan doesn’t work, you start to panic. I think it’s possible we see Washington State march early and put Iowa State on their back heels. I like Washington State (-2.5) here.