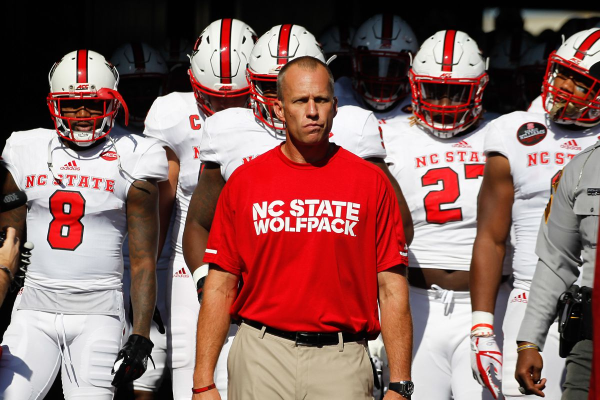 A huge ACC matchup takes place on Saturday afternoon as the #16 NC State Wolfpack head into Death Valley to take on the #3 Clemson Tigers. Both teams are undefeated and this is a huge game for both teams. Clemson doesn’t really have any more games on their schedule in which they are going to struggle to win so this is the last chance they have at making a statement win.

Wolf Pack Off to Great Start

NC State has gotten off to a very hot start to begin the year and a lot of that success can be attributed to their quarterback Ryan Finley. The grad transfer has thrown for 1,621 yards in five games and has added in 10 touchdowns as well as just three interceptions. NC State has run the ball this year pretty well gaining 3.9 yards a carry and running into the end zone nine times.

They are very balanced on defense as they allow 234.0 passing yards a game and 107.4 rushing yards a game. This is a team that is going to be really good this year and they will go as far as Finley takes them. With a big game looming against Clemson, we can be sure that NC State is going to come out and play their best.

The Clemson Tigers are cruising along this year so far and the one roadblock that stands in their way is NC State. The Tigers have been lights out on offense and defense this year as they score 42.2 points a game and only allow 14.5 points a game. Clemson has been moving the ball at a crazy pace on the ground as they have gained a total of 280.8 rushing yards per game and thrown for 250.2 yards a game.

Their rushing attack is ranked fourth in the nation. TravisEtienne leads the team in rushing with 761 yards on 83 carries along with 11 touchdowns. Five different players have accounted for rushing touchdowns this year for Clemson as they have averaged 7.0 yards a carry as a team. After taking over for Kelly Bryant, freshman Trevor Lawrence has thrown for 868 yards in four starts this year. Lawrence has also added in 11 touchdown passes through the first four games.

This is going to be a close game. All signs point to Clemson dominating this one but in recent years no matter the spread between the two teams, this is always a very close game. NC State should be able to set the tone early on, but if they cannot then Clemson will run away with the game. NC State will be able to contain Etienne and force the freshman quarterback to throw the ball more than he is used to. I look for NC State to keep this one close through three quarters before Clemson wears them out in the end. Take NC State and the points.