The Drama Continues in NCAA Basketball 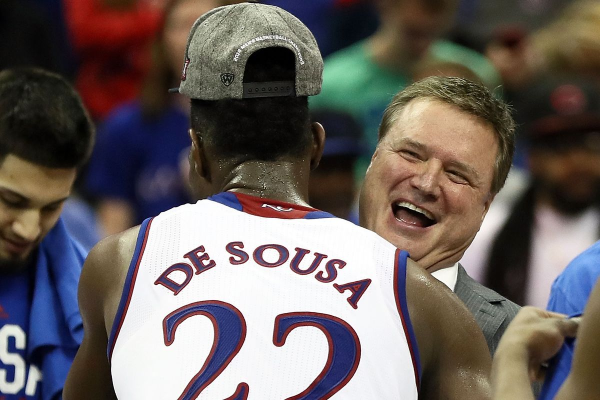 The beauty of college basketball is that the drama never ends. Even in the middle of July, there are plenty of intriguing storylines to follow. Here are a few of the things you may have missed over the past week.

Several former college basketball players are taking their case to court, meaning an actual court of law. Five members of the 2013 Louisville Cardinals national championship team are suing the NCAA for stripping the team of their title as part of the sanctions against the university relating to the infamous escorts scandal. Luke Hancock, a former Louisville captain who won Final Four Most Outstanding Players in 2013, is one of five players filing the suit. Hancock’s award was also taken away as part of the sanctions.

Kansas is the latest school to acknowledge that it has received a subpoena in relation to the FBI’s investigation into all the issues and corruption facing college basketball. At the center of the Kansas part of the investigation is current player SilvioDeSousa. Once thought to be leaning heavily toward attending Maryland, who has also received a subpoena, De Sousa enrolled at Kansas midway through last season. De Sousa’s guardian allegedly asked both Kansas and Adidas for $20,000 in order to repay money believed to be given to them by Maryland and Under Armour.

Speaking of De Sousa, Kansas coach BillSelf said earlier this week that “at this time” he is not worried about De Sousa being eligible for the 2018-19 season. Of course, if there is any proof that someone associated with De Sousa took money from either Kansas or Adidas in an effort to push him toward the Jayhawks, that could change in a hurry. The 6’9’’ forward enrolled midseason and averaged four points per game in 20 games played. However, with Kansas losing several upperclassmen, he figures to have a prominent role next season.

“The bottom line is that is something that has to play out,” said Self. “As much as I would like to say he’s positively this or that, I can’t do that. There has been no indication yet, that we would have a serious problem with that. That doesn’t mean something couldn’t come up that we’re not aware of.”

Connecticut finally has some on-court news that isn’t related to the firestorm surrounding former coach Kevin Ollie. Of course, the news isn’t all that good. The school announced Monday that rising sophomore Mamadou Diarra will miss the next four to six months after undergoing surgery to correct a torn meniscus. Diarra suffered the injury during offseason workouts. The 6’9’’ forward sat out his first season on campus with a knee problem and then averaged 2.7 points and 2.5 rebounds per game as a reserve for the Huskies last season. A four-month rehab puts his return at the middle of November, although if his recovery is slow, Diarra may not get back on the court until January. Dan Hurley is no doubt hoping to have all hands on deck for his first season in Storrs following Ollie’s 14-18 campaign last season.

King of the Dragons

Drexel announced this past week that it has signed head coach Zach Spiker to a contract extension. Terms of the deal were not released, only that it is a multi-year extension. Spiker is just 22-43 over his first two seasons at Drexel. He joined the Dragons in 2016 after seven years as the head coach at Army. Drexel did improve from nine wins in 2016-17 to 13 wins this past season, so Spiker did take the Dragons a step forward this past season and the school is banking on him continuing to improve the team’s record.