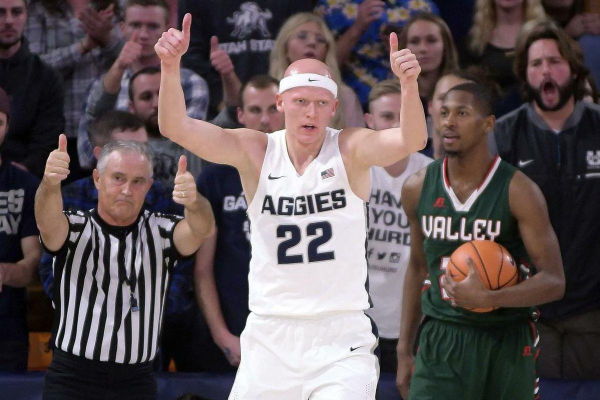 After a jam-packed day and night of action on Thursday, there are 16 games down and 16 games to go in the NCAA tournament’s first round.  On Friday, there are a multitude of interesting games on the docket including the matchup of the No. 8 Utah State Aggies (28-6) squaring off with the No. 9 Washington Huskies (26-8).  While anything goes in the tournament, especially since some of these teams have had close to a week off since their last game, it is hard to ignore the recent performances of these two teams.  For the Huskies, they come in having lost 3 of their last 7 games, including a 68-48 pounding by the OregonDucks in the PAC-12 tournament championship game.  Also in the tournament, they barely got by No. 8 USC (78-75) and No. 5 Colorado (66-61). For the Utah State Aggies, they finished the season rolling, having won 10 games in a row including a 64-57 win over San Diego State in the Mountain West tournament championship.  Washington and Utah State will square off Friday at the Nationwide Arena with tipoff scheduled for 6:50 pm ET.

In the matchup, the Utah State Aggies come in as 3-point favorites playing at the neutral site.  The over/under for this game is set at 135 points.

On the offensive side of the ball, UtahState has had a really nice season.  They currently rank tied for 38th in the country in scoring averaging 79.1 points per game.  UtahState is especially efficient in their scoring as they are shooting 47.4% from the field (good for 41st overall).  Washington, on the other hand, comes in at 254th in the nation in scoring averaging 69.8 points per game.

Defensively, Washington is a very strong team.  They currently rank 30th in the country allowing opponents to score just 64.4 points per game.  They are especially good at protecting the rim as they rank 2nd only to Duke in blocks averaging 5.7 per game.  Utah isn’t too bad on the defensive side either, though.  They come in at 56th in the nation allowing just 66.8 points per game.

Washington Hopes To Get It Turned Around For Tournament

From December 21 to February 7, Washington did not lose a game, going a perfect 12-0.  Since then, they finished 7-4 including going 2-2 in their last four games. They have shown glimpses of excellence throughout the season, but have been struggling a little, particularly on the offensive side, as the season has wound down.

Aside from Nowell, the next two leading scorers are guard DavidCrisp and forward Noah Dickerson.  Crip is averaging 12.5 points, 2.2 rebounds, and 2.8 assists per game while Dickerson is averaging 12.2 points, 7.4 rebounds and 1 steal per game. Another solid presence for the Huskies is Matisse Thybulle.  On the season, Thybulle is averaging 9.3 points, 3.1 rebounds, 2.1 assists, 3.4 steals and 2.3 blocks per game.

The Aggies have been absolutely sizzling down the stretch and a big reason for that is guard SamMerrill.  On the season, Merrill is averaging 21.2 points per game on 46.5% shooting.  He is also shooting 37.8% from behind the arc and 90.7% from the free throw line.  In addition to his scoring, he is averaging 4 rebounds, 4.2 assists and 1.1 steals per game.

UtahState only has one other player averaging double-digits and that is Neemias Queta.  The big man is averaging 11.9 points on 62.7% shooting while also adding 8.9 rebounds, 1.7 assists and 2.4 blocks.  Still, the Aggies have depth as they have six other players who have been averaging five or more points per game.  They will look to that depth to get by a stingy Washington defense.

This is a matter of two teams with two good defenses but only one of them has a solid offense.  I am just not sure that I can trust Washington to score enough to keep up with the Aggies, regardless of how well their defense plays.  It also doesn’t help that Utah State has been tearing it up the last several weeks while Washington has seen its fair share of hiccups. I expect this one to be close through the first half, but ultimately I don’t know if the Huskies have enough to keep up with Sam Merrill and the rest of the Aggies down the stretch.  In an 8-9 matchup truly anything goes, but for my money, I am taking Utah State despite laying the 3 points.