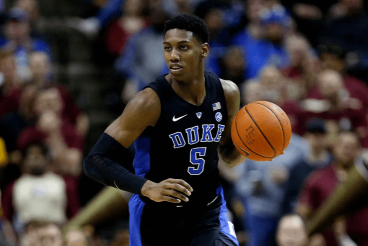 For Duke, they bounced back from losing to North Carolina, and star forward Zion Williamson, by beating Syracuse 75-65 on Saturday. Even though he is listed as day-to-day, Duke will once again be without Williamson, who had sprained his knee in the first minute of the game against North Carolina. Even without him, though, Duke is a tough matchup for most teams in the country. For Virginia Tech, they come into this one having gone 3-3 in their last six games. In their last game, on Saturday, they beat Notre Dame 67-59 on the road. Duke and Virginia Tech will square off Tuesday with tipoff scheduled for 7:00 pm ET.

In this contest, the Duke Blue Devils come in as 4.5-point favorites despite playing on the road. The over/under for this game is set at 146.5 points.

On the offensive side, Duke has been one of the best teams in the nation. They currently rank 5th in the nation averaging 85.5 points per game. Still, without Williamson, who accounts for over 20 points a game, it may be difficult to expect that level of execution. Duke also ranks 31st in field goal percentage (47.9%) and 18th in assists per game (16.5). For Virginia Tech, they rank 131st in the nation, averaging 74.4 points.

It is on the defensive side, though, where Virginia Tech excels. They currently rank 9th in the nation, allowing just 61.1 points to opponents. For Duke, they come in at a respectable 59th overall, allowing 66.9 points per game. Both teams make it tough on opposing shooters, as Virginia Tech ranks 31st, allowing opponents to shoot just 40.5% from the field and Duke ranks 17th, allowing just 39.5% shooting.

Duke Trying To Weather The Storm Without Their Star

Usually, the loss of one player can be tolerable for teams, but when that one star is the expected number one overall pick in the next NBA draft, it becomes a little tougher. This season, Williamson has been averaging 21.6 points, 8.8 rebounds, 2.2 assists and steals and 1.8 blocks. Those are all stats that coach K and company are going to have to try to replace.

Despite those gaudy stats, Duke is still with its leading scorer, RJ Barrett. On the season, Barrett is averaging 23.3 points on 46% shooting from the field. He is also adding 7.5 rebounds, 4.1 assists and almost a steal per game.

Outside of Barrett, the next leading contributors are Cam Reddish (14 points, 3.6 rebounds, 2.2 assists, 1.9 steals) and Tre Jones (8.6 points, 3.7 rebounds, 5.3 assists and 2 steals per game). What is remarkable that all four players (including Zion) are freshmen, making this one of the most dynamic, young squads in the country.

After a strong season, it has been a bit of a rollercoaster as of late. Still, at 12-2, coach Buzz Williams and the Hokies can be a tough matchup when playing in Virginia.

Leading the way for the Hokies this season has been Nickeil Alexander-Walker. On the season, he is averaging 16.5 points per game on 49.2% shooting, including 39.3% from behind the arc. He is also adding 3.9 rebounds, 3.7 assists and 2 steals per game.

Virginia Tech And The Points At Home

Normally it would be a no-brainer for me to take Duke despite playing on the road, but without Zion Williamson on the floor, Duke seems like a different team. Sure, they are still dynamic and can score in bunches with Barrett and Reddish, but they lack that inside presence that they have been accustomed to with the athletic Williamson. Between their defense and offensive depth, it wouldn’t shock me if the Hokies can pull off an upset in this one, especially if they can get hot from behind the arc (they rank 25th in the nation with 9.7 threes per game). Even if they can’t win it outright, I think they will keep it close, meaning the 4.5 points they are being spotted is huge. For my money, I am taking Virginia Tech and the 4.5 points.