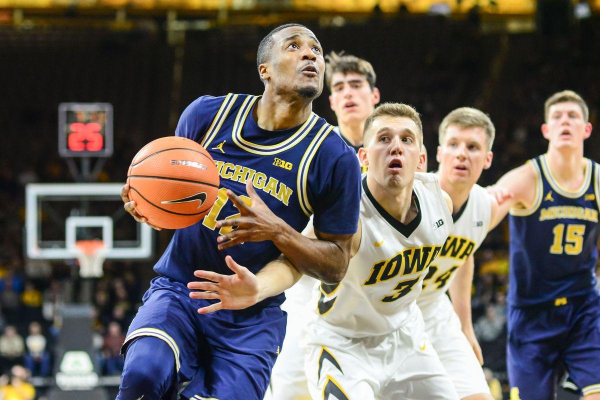 It will be a battle of the Big Ten on Thursday when the number 2 Michigan Wolverines (15-0) travel to State Farm Center to take on the Illinois Fighting Illini (4-11).

For Michigan, they have played sensational basketball thus far and look to extend their perfect record. To date, they have already beaten two top-25 teams in number 22 Indiana (74-63) and North Carolina (84-67). With an in-your-face defense that is relentless, the Wolverines will likely make life tough for Illinois’ struggling offense.

For the Illini, they come into this matchup having lost 4 straight, including a 68-66 loss to Northwestern on Sunday. To their credit, in Illinois’ 11 losses, 8 of them have been by 10 points or less, meaning they have kept most ball games relatively close. If the Illini hope to have a chance against Michigan, they will need a much better offensive performance than they had Sunday, but more importantly, their team will need to have an amazing defensive output to keep it close. The two will square up Thursday with tipoff scheduled for 8:00 pm ET.

In this contest, the Michigan Wolverines come in as 9-point favorites despite playing on the road. The over/under for total points scored is set at 136.

Michigan is looking to continue to roll through the Big Ten, and to do so, they will continue to rely on Ignas Brazdeikis, Charles Matthews, and Jordan Poole. On the season, Brazdeikis is averaging 16 points, 5.3 rebounds and 1 assist per game while averaging 29.7 minutes a night. He is shooting 48.5% from the field and 39.6% from behind the arc. For Matthews, he is averaging 14.2 points, 5.3 rebounds, 1.1 assist and 1.5 steals per game in 30.9 minutes a night. Lastly, Poole is averaging 14.1 points, 3.8 rebounds, and 2.2 assists while shooting over 50% from the field.

Illini Needing Big Win To Give Some Confidence to Squad

It has already been a long and frustrating season for Brad Underwood’s team in Champaign. Having lost so many relatively close ball games can grind on a team, and their schedule doesn’t get any easier from here with Michigan coming to town. Like Michigan, they basically go 7 deep, and they have three players averaging double-digit scoring. Trent Frazier leads the way with 14.9 points, 2.4 rebounds, 3.2 assists and 1.9 steals per game while shooting 41.2% shooting from the field. Ayo Dosunmu is next, averaging 12.9 points, 4.5 rebounds and 2.9 assists per game. The third leading scorer is Giorgi Bezhanishvili, who is averaging 10.1 points and 4.8 rebounds, while also shooting 50.4% from the field.

This one really boils down to the fact that Illinois is not particularly strong in any one category (except forcing turnovers, where they rank 11thin the nation at 17.87 per game), but still, their defense is mediocre at best, and if they aren’t forcing turnovers they aren’t too intimidating. For Michigan, while their offense is only average, their defense is of the lockdown nature. For an Illinois team that has a hard time finding a way to score, I think they are going to struggle all night while Michigan’s offense will put up enough points to not only win but to cover the spread. For my money, I am taking Michigan despite laying the 9 points.